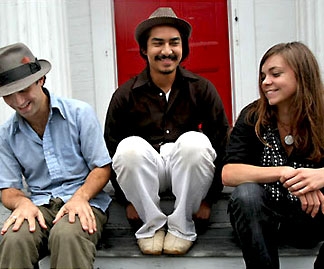 What do you get when you combine a folk musician/painter, a baseball historian/jazz bassist and a NASA technician/classical composer? It sounds like the setup for a very esoteric joke, but it’s actually the lineup for very esoteric indie folk outfit, The Low Anthem. With freak-folk gaining a solid following in the indie scene, The Low Anthem’s third album, Oh My God, Charlie Darwin, sees the group really hitting its stride. RELEVANT talked to frontman Ben Knox Miller about the eclectic mix that makes for The Low Anthem’s unique sound.

Is there a place for folk music in a world addicted to “mainstream indie rock” and Lindsay Lohan foibles?

This is a beautiful question.

Answer A: Addiction is the right word. Wandering eyes find their pleasures, no? When fans seek their music based on hype rather than music, and when individuals seek their thrills vicariously through the torn souls of the rich and famous this reflects a massive cultural depression, yes? A wild insecurity? Have eye-candy and hype become meaning?

Answer B: With folks Twittering, Facebooking, iPoding, MySpacing, fantasy baseballing, YouTubeing, everything has become about you, the fan. The fan has a new sense of personal profile and stake. More and more, music is heard in the privacy of earbuds. It’s not surprising then this trend away from the extroversion of rock and roll, and toward the relative introversion of Bon Iver, Fleet Foxes, Grizzly Bear, etc. This music is less about some rock god melting your bionic fanface, and more about you!

Answer C: There is a place for everything. Especially folk music. As the music world quakes and shudders in its newly permanent state of endless reinvention, skyscrapers shoot up, only to tumble into vague memory. Sounds, seedling genres come and gone. But this is not so for folk music for it is closest to the ground. Poetry, narrative and song. There will always be a place for these things.

What’s up with the Charles Darwin album title?

So one of you used to be a NASA technician? What’s the story there?

Jocie used to work for NASA. She was specifically involved in infrared spectrometry attempting to determine the composition of Titan’s atmosphere.

You talk about God quite a few times. What’s your story as far as your own faith?

I am fascinated with the quest for faith. That hollowness and the hunger that grows from it. I am less interested in any faith-practice that seeks to quell doubt or replace hunger with absolutism.