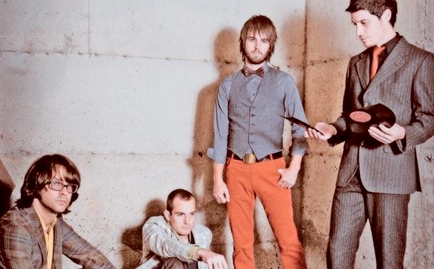 We go back in time to look at the band as they were just starting out.

Editor’s note: Way back in the fall of 2004, a very cool new band called Mute Math played a show for about 500 people at our office, and absolutely blew everyone away. The next spring, we helped introduce them to our readers by putting them on the cover of our March 2005 New Music Issue around the anticipated release of their debut album. But because of label contract disputes, that album’s release was delayed until Sept. 2006. (Not great for our issue sales.)

Today, the guys released their highly anticipated second full-length, Armistice, to much critical acclaim. But rather than talking about the new project, which you can stream below, we thought it might be interesting to take you back to the beginning—to see how Mute Math formed from the ashes of Earthsuit, the band’s hope for their future (right before an unseen two-year delay in the album coming out) and our impressions of them before they were regularly playing sold-out tours and late-night talk shows. Below is an excerpt from the March 2005 cover story. You can buy that issue here.

Fog seeps over the edge of the stage of the dark, standing-room-only venue. There are three bands on the schedule for the evening, but most of the fans are here only to see headliner, the David Crowder Band. Four neck-tied men casually take the stage as a curious hush falls over the crowd. It’s as if they just walked off the pages of some underground New York fashion-zine.

For the next 25 minutes, Mute Math proceeds to make 1,200 new fans. It only takes a few measures of the first song for the audience to go from curious to captivated. An ovation erupts as the band charges through its last song, graciously thanks the audience and walks off the stage. As irony would have it, it’s the very same stage that some of the band members walked off just two years before to a much different reaction. It is this stage that marked one of the last performances of their former band Earthsuit, and what was thought to be the end of their time together as a group.

“Man, 2002 was a rough year,” Mute Math vocalist Paul Meany said as we sat backstage after their set. “That’s when it all fell apart for us. We were literally watching people leave our show every night.”

He had a smirk on his face as he talked about one of the “big memories” from the year when Earthsuit came to a crashing finish. His band was following Delirious? for a crowd of 5,000 at a large summer festival date.

“We thought, ‘This is going to be great, this is going to be a lot of fun.’ Delirious? finished their set, we’re getting ready to set up, and the announcer goes, ‘And next up, y’all, stick around, we’ve got Earthsuit coming up!’ And it was as if someone had yelled ‘Fire!’ in the place. It cleared out. It went from 5,000 people to 100 people right there in the front in the matter of five minutes. And that is the picture that stands out to me as the poster moment of that whole year."

Meany laughed as he told the story, not just because of the painful awkwardness of the moment, but because now it seems a little ironic. Tonight, Mute Math played a set that blew away a crowd that, for the most part, had never even heard of the band before.

After a series of disappointing shows, having his band dropped from its label and eventually completely disbanding, Meany considered Earthsuit to be over. He returned to his home in musically rich New Orleans, settling back into a music director position at his church. It was a time that served as a creative breakthrough.

“I began to sit down and write songs not for deadlines and not to create revenue for a company—so we can have payroll getting covered—and began to let myself just enjoy music just like when I was growing up,” Meany said.

While reconnecting with his musical roots, Meany began to collaborate with a young, enthusiastic drummer who had previous experience with the songwriter. In 2000, Earthsuit’s original drummer left the band, so there was an opening for a new drummer for several shows of a tour. It was an opportunity of a lifetime in the eyes of Darren King, a Minnesota native who had been sending demos to Meany for a year. King auditioned and played with Earthsuit for two months before moving to Nashville.

The pair’s reconnection after the Earthsuit breakup provided a forum for Meany’s unique songwriting style to fuse with progressive ideas of the percussionist that lent itself to hours of sessions that birthed what would become early Mute Math songs. The two recruited friend and guitar player Greg Hill (who had briefly played with Earthsuit), and the collaboration was complete.

Mute Math started from square one. Because everyone in the band had come from previous experiences that left them jaded by the ruthless nature of the industry, a fresh approach was taken. What they have brought to the band is a new perspective: on music, the industry and what it means to be successful.

“The vision of the band, and everything else, is not getting caught up in religion,” Hill said. “To me, religion is getting stuck on one thing. There’s not much freedom in religion. You’re bound to your rituals and your routines that you walk through every day. It is important to have those, but it’s also important to grow, because if you’re not moving forward, you’re standing still and then moving backward.”

The parallel between the group’s sincere search for spiritual progression and the band’s constant pursuit of musical innovation is the staple of the vision behind their sound. The sound of their debut release is a musical representation of the dissatisfaction with the status-quo, the resonance of moving forward.

The group teamed up with Teleprompt Records producer Tedd T. to create a debut release that captures the raw energy of live shows and the polished thoughtfulness of their unique sound. The chemistry among the musicians is apparent in more than just the songs of Reset; the interaction among Meany, King and Hill is showing of three individuals who enjoy each other’s company.

“I think the chemistry of a band and the chemistry of really making music is paying attention to what everyone is doing, and everyone is making a conscious decision to complement each other. It’s staying aware of the moments, certain moments throughout making music to feed off of that for inspiration,” Meany said as he described what makes his songwriting blend so well with the guitar work of Hill and the electronic ideas of King.

Mute Math’s sound developed from the wide range of eclectic influences that the three have grown up on. Everything from old-school hip-hop beats, lyrical styles of The Police, Bjork-inspired programming and the soul of Stevie Wonder.

“I played piano,” Meany said. “I studied music growing up. There was a part of me that was always intrigued by just figuring stuff out, you know, what are those chords, what are those melodies. It was about just beginning to develop a creative vocabulary.”

“One thing that I hope for is that the album has a consistent attitude and feeling throughout it,” King said. “I hope that it’s going to be an album that the songs create something bigger than each individual song, which I think that is the next level of song-craftsmanship. People who can write songs with the full album in mind, those are really great writers. Simply put, I just want people to like our songs.”

Redemption has never sounded so good.

Why Does God Let Bad Happen?