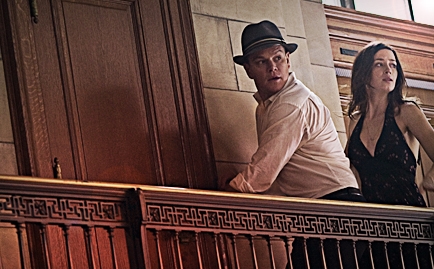 George Nolfi is one of Hollywood’s rising writers of intelligent action films, having had a hand in The Bourne Ultimatum and Ocean’s Twelve. Working with Matt Damon on both of those films, he decided to include Damon in his dream project and directing debut: an adaptation of legendary sci-fi writer Philip K. Dick’s short story “The Adjustment Bureau.”

Dick’s books and stories have served as the fodder for some of Hollywood’s most striking films of the past three decades, including the timeless classic Blade Runner. In them, he addresses issues of free will and consciousness, and how much control we really have over our lives and destinies. That theme has never been laid out as strongly as it has in Bureau, a must-see film not only for film buffs but especially for Christian filmgoers who wonder why Hollywood doesn’t deal with spiritual matters in a meaningful way, and who bemoan the lack of entertainment value in independent Christian films.

Nolfi himself has been involved in a massive national outreach to Christian churches and colleges designed to alert them to this extremely worthy film. He sat down for a phone interview with RELEVANT to discuss his newest film.

How were you drawn to this subject matter? Were you just a fan of Philip K. Dick, or was there a spiritual element?

I’ve long been fascinated with the question of how much we control our own destiny or how much we’re controlled by larger forces. When I think of that question it’s not explicitly theological, though I think that’s one of the answers. I studied philosophy in grad school and it intertwines with theology. Is it social forces, like what family you’re born into, or God’s plan for you that shapes your life most? We’re set on a path by something much bigger than ourselves, and yet we also know we have choices and that they matter.

Did your own spirituality or religion play a part in the project?

I’ve not talked about my personal views because of this reason: I want the movie to be viewed by people whether religious or not or whatever religion they are. I want them to engage with the central question bringing their faith and views and grappling to the table. So when they leave, the question of how much of your life is handled by outside forces and how much by you is key, and that has been around since the ancient Greeks. I just want to have people have a great time at the movies in a romantic thriller with a sci-fi tinge to it all, leaving with their own questions brought to the table.

As a kid I’ve been interested in this issue. I studied it in college and graduate school, and studied various ways people grapple with that. My own family background dealt with it as well. I was also fascinated with the problem of evil in theology and if there’s a higher power that’s all-powerful, benevolent and all-knowing, then why do bad things happen to good people?

I think that for religious people period, but certainly Christian audiences, it is a part of their daily life to engage in discussions of why are we here. I don’t think that necessarily people who are completely secular deal with those issues, but I think it’s almost impossible to be a religious person without struggling with this issue. It’s ultimately a movie about a character going through character changes. It’s a thriller, and hopefully you’re on that ride. But it does have these issues, and I thought it would have extra interest to those who struggle with it on a daily basis.

What do you feel the message of the film is regarding free will vs. predetermined life? What are your own opinions on that?

I’ve never found a satisfactory answer that it’s one over the other, it has to be both. It doesn’t make sense to me to say the path for me is set and I can’t change it, [but] I can’t say I’m superman and make my life exactly what I want it to be. There are forces that affect us, be it a Higher Power or social class of our family—a wealthy family in Connecticut versus a poor family in Egypt. There are a lot of ways to view the things that affect the path we’re put on.

How have Christian audiences responded?

They’ve responded very strongly. I’ve personally been at five screenings—nobody leaves the theater and the discussion goes on for an hour or more.

Did you get a lot of challenges from studios or producers about touching this kind of subject matter?

Nobody interfered with the vision of the movie at all, which surprised me. Matt Damon backed me and believes in backing the director’s vision. The studio was also aware of the movie they signed up for, crossing genres.

Universalism and the Doctrine of Rob Bell