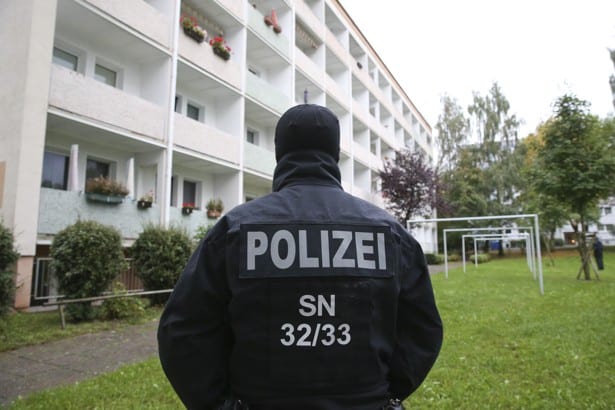 A Syrian man with suspected links to the Islamic State, has been captured in Germany after being found by three Syrian refugees.

Prior to that, a two-day manhunt began for the man after police found volatile explosives in Jaber al-Bakr’s apartment in the city of Chemnitz. Al-Bakr evaded capture after police fired a warning shot in a botched attempt to stop him.

Jaber al-Bakr arrived in Germany as a Syrian refugee. Police found a detonator, explosives and a kilo of chemicals in the home, many of the same substances used in Islamic State attacks in Europe.

BBC reports that the suspect was finally detained when a group of Syrian refugees in Leipzig recognized him from police appeals that were issued in German and Arabic.

While on the run, he told three Syrians he met that he was in need of immediate housing. They then realized he was the man in the police appeals and tied him up until police arrived to arrest him.

“The methods and behavior of the suspect suggest an [Islamic State] context,” said Saxony State Police chief Joerg Michaelis. “It is reasonable to assume that an explosives belt was nearly ready, or had been prepared already.”

Police in Germany have been on the defense against attacks similar to those in Belgium and France. Over a million refugees made their way to Europe fleeing war in Syria, with Germany admitting the most.

Organized groups in the country have been putting pressure on the government to enforce more intensive processes in vetting migrants. The capture of al-Bakr will likely increase the criticism of a nervous German public.

Chris Pratt Visited a Children’s Hospital and Told Instagram ‘Don’t Withhold Good From Those to Whom It Is Due’ (Proverbs 3:27)