When it comes to holiday-themed entertainment, it appears Hollywood ascribes to quantity over quality. In the 90’s the public seemed content to watch classics like Rudolf the Red Nosed Reindeer and White Christmas on repeat, whenever the moment called for a double shot of nostalgia.

But in the streaming era, the expectation seems to be Christmas movies should be as “binge-able” as all 10 seasons of Friends. Netflix, Hallmark and Lifetime debuted 84 original Christmas movies this year alone between October 27th and December 25th.

That kind of output is only possible with an assembly-line process. One screenwriter I interviewed confided he was given a total of three weeks to write two made-for-TV Christmas movies. To put that into perspective, Pixar usually spends two years or more on a script before moving forward.

For some viewers, the glut of movies working off of some variation of “girl returns to her hometown only to fall for the hardware store guy with an adorable small child and/or dog” are good enough for festive background noise while they clean for company or bake cookies, but if you’re looking for smarter and more meaningful Christmas fare, here are four movies that go deeper than the Hallmark Channel—without sacrificing holiday cheer.

Judging by the poster alone, it would be easy to toss The Family Stone in the same mental junk drawer as Love Actually. Both feature ensemble casts of established stars crisscrossing a plot that climaxes on December 25th. But while Love Actually makes you reach for the Kleenex box in the hopes you don’t notice its absurd plot, The Family Stone hits uncomfortably close to home. What starts as a romantic comedy about bringing a new flame home to meet the extended family morphs into an unflinching look at the gut-wrenching pain of grief and loss during the “happiest time of the year.”

Almost without exception, by our mid-twenties, everyone feels the sorrow of an empty chair at the Christmas dinner table. The Family Stone endures as a holiday classic because the movie serves both as a reminder of the brevity of our lives on Earth, but an aid to that grief as well.

Sure, it’s the movie you’d expect to be on a list like this. But the next time you stumble across this iconic 1946 picture, take the time to watch it with new eyes. The overall message seems straightforward: Protagonist George Bailey is the world’s most ambitious boy scout—he never travels the world, but he finds love and happiness in the hometown he spent his life trying to leave behind.

From that angle, Wonderful Life sounds indistinguishable from the dozens of movies you can watch on Lifetime right now. But this story stands out because of the impeccable performance of James Stewart in the lead. He sells the gut punch of dead dreams that will never be resurrected. Sure, George discovers meaning in life with the help of Clarence the Angel and a motley crew of townsfolk, but Wonderful Life doesn’t try to smooth over how Bailey missed out on his dream to travel and build a large company.

The most faith-driven Christmas movie here, Wonderful Life is also worth revisiting as a reminder that God’s love extends to right where we’re at, especially when the lament of lost dreams enters the holiday season.

Every few years another “I’m dying, so let’s make these days count!” movie hits the local multiplex, so it’s no surprise that in 2006, a holiday-themed spin on that same old plot was released. Aside from Queen Latifah’s knockout performance as a painfully shy department-store employee who’s given just three weeks to live, The Last Holiday works as a meditation on untapped potential. Sure, Latifah’s Georgia Bryd goes for all the dreams she’s documented in her “Book of Possibilities” (it’s ok to gag, even good Christmas movies throw the occasional cliché at you), but The Last Holiday succeeds because the narrative lens widens beyond Georgia’s own happiness.

The real weight here is Georgia’s giving spirit. This one sticks with you not because Georgia checks off the items on her bucket list (errr “Book of Possibilities”) but as a result of how Byrd positively affects everyone around her even as she stares down the barrel of eternity.

Christmas is the season of goodwill and charity, which The Last Holiday delivers without the seasonal schlock.

If you’re easily offended by shock humor, this one isn’t going to work for you. But the ensemble cast, which includes T.J. Miller (Silicon Valley, Deadpool), Jennifer Aniston, Jason Bateman (Ozark) and Kate McKinnon (Saturday Night Live) starts out as a grown-up version of Home Alone before diving deep into economic insecurity.

The plot is structured around a company that’s going under just in time to put their employees out on the street for the holidays, unless T.J. Miller and crew can throw an epic corporate Christmas party and lock down a key account. The predictable zaniness ensues, but a third act plot twist brings Office Christmas Party back to reality.

There’s no pain at Christmas that twists the knife quite like being broke in the face of social pressures to spend, spend, spend. Despite this reality, economic factors almost never make their way into Christmas movies. Office Christmas Party utilizes a frat humor set up to land the surprise left hook of a deeper message, which means the viewing experience brings both belly laughs and a reminder to look for opportunities to be generous. 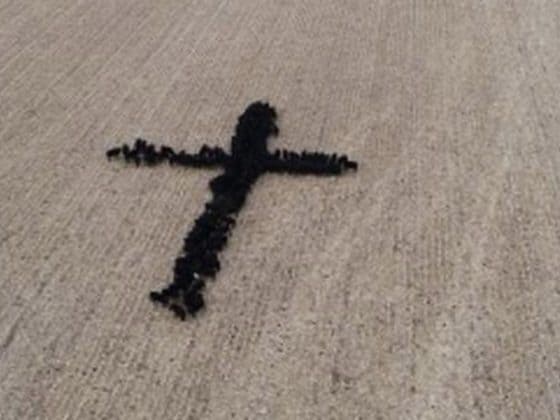 Checkmate, Atheists. Peep Your Eyes on These Cows Resembling a Cross