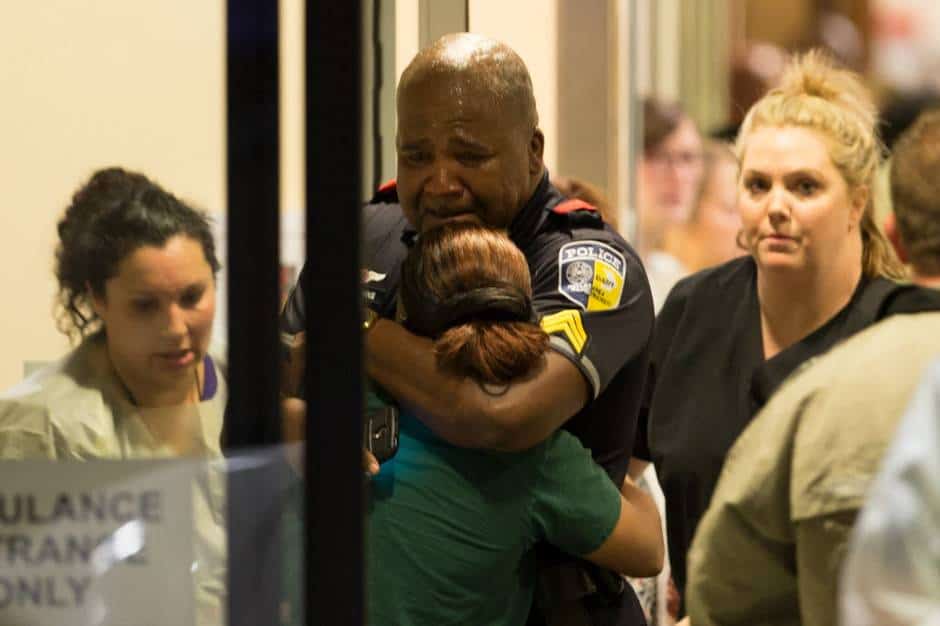 A total of 12 officers were shot last night—five fatally—along with two civilians in what’s being called an ambush at a protest in downtown Dallas.

Four suspects were apprehended: three of them are in custody and are not cooperating. The last suspect engaged in a shootout and standoff with police for several hours and was eventually killed when a police robot detonated an explosive in a parking garage at El Centro College.

Two snipers with rifles began the coordinated attack around 9 p.m. from elevated positions.

“We believe that these suspects were positioning themselves in a way to triangulate on these officers from two different perches and garages in the downtown area and planned to injure and kill as many law enforcement officers as they could,” Dallas Police Chief David Brown said.

The protest was organized by the Next Generation Action Network, according to the president, the Rev. Dominique Alexander. Alexander said his organization, in partnership with Jeff Hood, organized the march through downtown Dallas as a call for justice for black victims of police shootings.

The suspect who engaged in the shootout with officers reportedly told a negotiator that he was upset by recent police shootings, but wasn’t affiliated with any groups and acted alone.

“He has told our negotiators that the end is coming and he’s going to hurt and kill more of us—meaning law enforcement—and that there are bombs all over the place in this garage and in downtown,” Brown said.

“It is a heartbreaking morning to lose these four officers who proudly served our citizens,” Dallas Mayor Mike Rawlings said. “To say that our police officers put their lives on the line every day is no hyperbole, ladies and gentlemen. It’s a reality.”

President Obama spoke from a NATO summit in Warsaw saying, “Today is a wrenching reminder of the sacrifices that [law enforcement officers] make for us,” he said. “The entire city of Dallas is grieving. Police across America—which is a tight-knit family—feel this loss to their core. ”

Starbucks Price Hike May Get Them in More Hot Water

Christians Have to Mourn Injustice