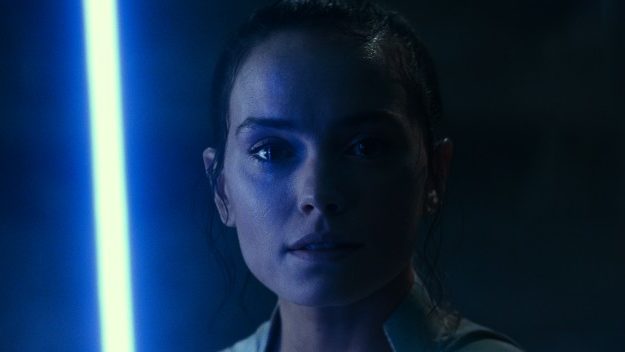 Did you all catch that The Rise of Skywalker trailer? Man, that thing was cool. All those spaceships? Lando? Let’s all take one more look, just to make sure we’re all on the same page here.

Obviously, not everyone is on board with this new franchise but we dig these movies, so haters may have to go find a different write-up. For those still around, here are 7 questions we’ve got after the trailer for this movie, which promises to bring the Skywalker saga to a close. It may go without saying but spoilers for the other Star Wars movies abound.

Some Star Wars fans ship Vader Jr. and the galaxy’s most enigmatic heroine, and while a romance feels a tad on the nose, it does seem clear that these two share some sort of mysterious bond. The Last Jedi seemed to answer the question of Rey’s parentage pretty definitively, but there are still a few who suspect a misdirection. Are Rey and Kylo twins (they run in the family!)? Is Rey a Kenobi? Or do they just click in a weird, Force-y way?

2. How is Emperor Palpatine still around?

Some 35 years after he bit the space dust in Return of the Jedi, it looks like the Emperor has returned to cause some headaches for the Resistance. The rules around Jedi ghosts seem a little unclear, but Obi-Wan dropped by to tell Luke who his sister was in RotJ so death seems to be an extremely fluid concept in a galaxy far, far away. And if the Emperor is still around, might Luke and maybe even Anakin pop up as well?

This trilogy has killed off classic Star Wars characters with reckless abandon, but our intergalactic Laurel and Hardy seemed about as invincible as they come. Still, Threepio’s line in the trailer seems awfully foreboding. Is he gonna make the ultimate sacrifice and follow his former owners into the Great Beyond? Seems possible, as noble sacrifices have been built into the DNA of this franchise from the very beginning. Then again, C-3PO has wrongly predicted his own doom in almost every movie he’s ever appeared in so it could just be more wolf crying.

That’s not really a question but, yeah. Sure looks like it.

5. How exactly is ‘Skywalker’ going to rise?

The title, clunky as it is, is one of the most intriguing things about the movie. Though Luke is gone and Leia’s son given up for lost, it seems the bloodline has a role yet to play in the fate of the galaxy. Is redemption possible for Kylo Ren? Is there another Skywalker we don’t know about? Or does the name carry a symbolic significance beyond the family tree?

6. What is Leia‘s role going to be here?

Director J.J. Abrams promised to not use any digital trickery to bring Leia back for the final installment in the trilogy, meaning the team combed through old, cutting room floor footage to provide her with, at least, a cameo appearance here. The trailer released on Monday — which would have been Carrie Fisher’s 63rd birthday.

mewithoutYou Is Calling It Quits