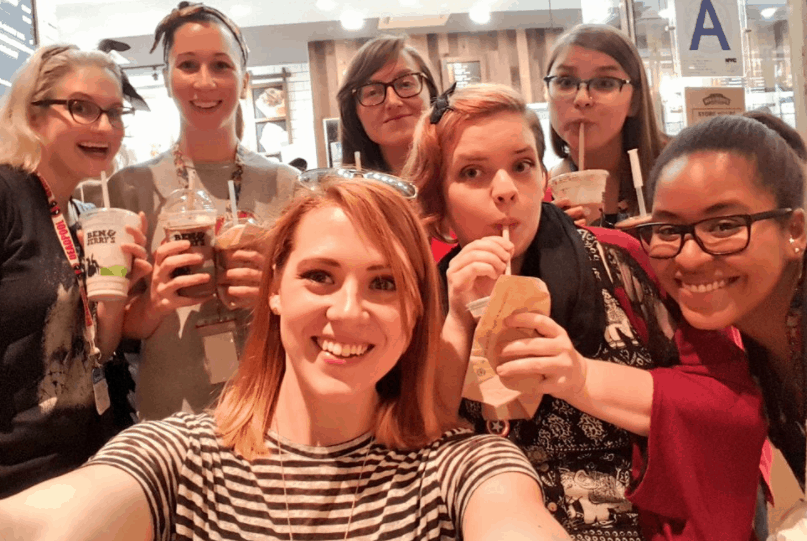 Superhero comics have enjoyed a nice decade or so in the sun given the success of Marvel’s films (and DC’s, sort of) but for all their box-office success and relative quality, the community remains a bit toxic for women, as a stupidly innocuous, incredibly innocent tweet over the weekend showcased.

Heather Antos is an editor for Marvel Comics, where she writes titles like The Unbelievable Gwenpool. She took a Friday selfie of her grabbing a milkshake with some Marvel co-workers. You might think such a tweet would be completely lacking in controversy, let alone give anyone an excuse to absolutely fly off the handle but, hoo boy, there were a lot of men who did not like this picture.

Can we just get off of feminism and social justice and actually print stories. God DC looks better and better

And those are just a few of the ones that didn’t contain crass language or explicit threats, and Antos claimed she got harassment via private messages too. (“SJW” is an acronym for “social justice warrior” which, although it sounds awesome, is a term the alt-right tends to use derisively.)

Woke up today to a slew of more garbage tweets and DMs. For being a woman. In comics. Who posted a selfie of her friends getting milkshakes.

How dare I post a picture of my friends on the internet without expecting to be bullied, insulted, harrassed, and targeted.

So that’s a bit of a bummer but, fortunately, the internet also turned up in a big way to shut down the haters. From Antos’ co-worker and Daredevil writer Charles Soule….

The women who work at Marvel, at all levels, are amazing. Smart, skilled, tenacious, tough. How do I know? Because I get to work with them.

…to, of course, the female fans…

Love seeing the support for women in comics because WE ARE EVERYWHERE and WE ARE KILLIN' IT! #MakeMineMilkshake pic.twitter.com/PNSylwo6F7

…and even a few male comic book fans who weren’t about to sit around quietly and let the trolls dominate the Twittersphere.

I will buy a milkshake tomorrow or make one myself. In support of @HeatherAntos & all the other women working for Marvel.#MakeMineMilkshake

So, all told, there are more people rushing to Antos’ defense than trying to attack her. But it’s a shame that still, in these times, a woman can’t take a picture of herself drinking a milkshake without a few people using it as an excuse to say she doesn’t deserve her job. Hopefully, with movies like Wonder Woman this year and Marvel’s upcoming Captain Marvel film, the community will continue to improve for superhero comic fans and creators.

Huzzah! Look at This Picture Jason Bateman Tweeted Over the Weekend

Dozens of Refugee Orphans Are Now Blocked From the U.S. Because of Trump’s Travel Ban