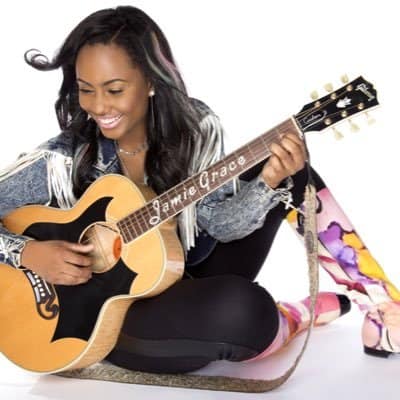 Jamie Grace, the 24-year-old Christian musician and actress, received the chance of a lifetime when Adele invited to her to share the stage at the Staples Center in Los Angeles.

Grace told the Atlanta Journal-Constitution that she flew to the LA show because it was the only one she could get tickets to.

Adele had no idea that Jamie Grace was a Grammy-nominated singer, but Grace boldly asked Adele if she could join her on stage.

“She’s squatting down so people can take selfies and she’s talking the whole time and then she got to us and I look at her and said, ‘Do you want to sing with me?’ Adele said, ‘Well then, come up here.’ It was the quickest exchange.”

Jamie Grace sings Adele’s “Remedy” and Elvis’ “Can’t Help Falling in Love With You” after Adele told her she could sing whatever she wanted to.

“My birthday is in November and I’ll be 25—which is big year for me—on Nov. 25. Adele’s new album is called ‘25’ and I’m shooting a documentary called ‘Waiting for 25,’ so I’m very emotional about the number 25 right now. With that, I wanted to buy tickets to see her for my 25th birthday and this was the only show I could get tickets for and I spent three hours online trying to get them. So I said, let’s celebrate my birthday three months early,” she told AJC.

6 YouTube Videos that Will Restore Your Faith in Humanity

Pope Francis Had Lunch with Syrian Refugee Families This Week