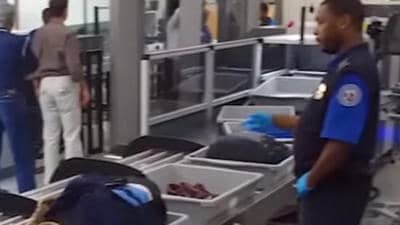 American Airlines and TSA are trying out a new way to ease the lines and frustrations caused by security checkpoints at the airport. With automated security lanes at American’s hubs in Los Angeles, Chicago, Dallas/Fort Worth and Miami, travelers can expect to see a 30 percent decrease in wait times, according to American and TSA.

The new automated lanes would automate the conveyer belts and bins through the X-ray machines and sending bags with suspicious items to another line. It would also allow people to leave their liquids and laptops in their bags. Then the empty bin returns itself to the beginning of the line—making the process pretty hands off for travelers.

The move by American comes after Delta Airlines introduced two automated lanes at Hartsfield-Jackson in May in response to industry complaints about TSA wait times causing thousands of people to miss their flights. But we know what this really means: We can all wait 30 percent longer before leaving for the airport.

6 Christian Amusement Parks and Crazy Attractions That Have Actually Existed

Why the Church Can’t Be Silent about Police Violence