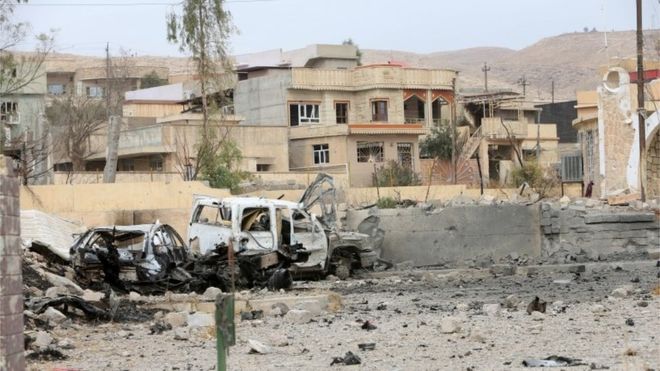 Battles in Mosul continue as the offensive to recapture the city from ISIS enters its fourth week. The offensive grows in urgency as ISIS doubles down on their defense against government forces by stockpiling chemical weapons for a major advance.

Last week, the Islamic State hanged 40 civilians, accusing them of treason. According to a UN report, the brutal murder of these civilians was carried out in public on the orders of self-appointed “courts.” The victims were dressed in orange clothes and their clothing was marked in red with the words “traitors and agents of the ISF” (Iraqi Security Forces).

ISIS has had control over Mosul since 2014. Pro-government troops have made gains in the eastern outskirts of Mosul in the fourth week of their offensive to retake Mosul. In the areas recaptured from the Islamic State, hundreds of Iraqi civilians have spilled into the streets to demand food from the military as shortage in their rations persist.

President-elect Trump pledged in September that his cabinet would have 30 days to come up with a plan for “soundly and quickly defeating ISIS.” CNN reports that the U.S. and its coalition partners have conducted a total of 15,959 air strikes between Iraq and Syria.

The battle for Mosul is likely to continue well into Trump’s inauguration on January 20. How his policies will shape U.S. offensive in the area following his election remains largely unknown.

The One Thing We’re Called to Post-Election