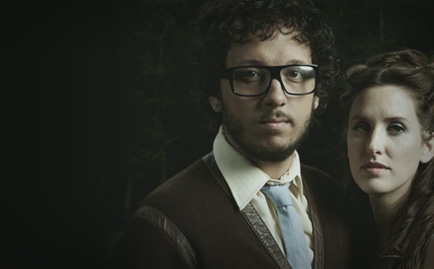 When you first listen to Gungor, the full sound belies the fact that the collective is primarily led by husband-and-wife duo Michael and Lisa Gungor. With stirring cellos, driving drums and delicate harmonies, their first album innovated both the sound and the language of worship music as Christians know it today. (If you don’t believe us, watch their performance of "Beautiful Things" at RELEVANT Studios last year.) They recently released Ghosts Upon the Earth, which represented a stylistic departure for the band. Gone were the soaring arena choruses, and in their place Gungor put in careful, driving chamber pop. The result is an album steeped in mystery, beauty and, well, spirituality. The band recently sat down with us to discuss the new album, theology and why, just as with God, you can’t put worship in a box.

RELEVANT: Your music is very spiritual—much more spiritual than general-market listeners are probably used to, yet you don’t want to be labeled as “Christian music.” Why is that?

Michael Gungor: Music, to me, was always very spiritual. I pretty much learned how to “do” music in church, playing in the worship band. Music always touched me in a deep place in my soul. Spirituality and faith and all the stuff we write about and worship itself—those are coming from the deepest places in my soul. What I love about music is that it has this ability to get beneath the surface of things and speak from and to the soul. Part of what I don’t like about the labels of Christian music is that, first of all, we don’t classify other music like that. We don’t say “atheistic music” or “humanistic music”—we don’t lump that all together as if that is the foundation. If it’s art, we’re all saying something. To me it’s just an odd way of separating it; it’s a word game, really.

How has your theology informed the kind of music you make?

MG: It’s interesting—it actually has informed it in its entirety, not just the lyric content. The entire idea of what it means to be a Jesus follower in this world has shifted from what it used to mean. It left realms like art, even caring for the poor. You hear Jesus talking about it, but even in the theology I grew up with, it never really made sense to me why Jesus would stress something like that so much. That didn’t fit my big story of what it was all about. These kind of philosophical things seem abstract on some level, but for me it really gave me an impetus to create as a sacred act, to bring order into creation. To order creation in a way that is meaningful and sacred. Growing up, I felt like if I wanted to really be selfless and serve God with my gift, then it had to fit into a certain category. You know: “You’d better have enough Jesuses per minute if you really want to write a song and have it please God. If you really want to do a lot with your life, you’re supposed to join full-time ministry and work for a church.” That was just kind of the mindset I grew up with.

What freed you from some of those shackles?

MG: I guess seeing that God is the sacredness of everything. I would say, even as a worship leader: “Worship isn’t just you singing here in church. You going to your job should be worship as well.” But I didn’t extend that same grace to myself. Writing music, you can write any sort of music, and that can be a sacred act; it doesn’t have to be Church music. That was a theological shift for me, personally, seeing it wasn’t about me having to put enough crosses in every painting I paint, enough Jesuses in every song I write. Not that you don’t ever do those things, but it broadened the scope of potential human work that could be sacred. For me, it gave me permission to dig into some musical things and some artistic ideas I would love to do, but it almost felt selfish before. The theology shifting made it sacred rather than selfish.

Lisa Gungor: We would all like to say we don’t care what people think. There’s a certain amount of that in all of us. That’s sometimes just a hard thing to get over. You want people to like the music, you want people to connect with it. You have to convince people you’re talking about Jesus; they think you’re just talking about love. If we really believe Jesus is love, our actions need to speak louder than our words. I feel like some of that is just pushing off that weight of people’s perspectives of you.

How have you personally changed from the last album to this album?

LG: For me, I thought this was a season of doubting and darkness—you kind of think that season will disappear. In some ways it’s still present. I still have questions, I still doubt. But I think I see the light more than I used to. There was a season for me where I was completely overcome by just looking at the evil and the darkness in the world. I felt like it was overpowering the light. I feel like in this album there is light. It’s not just the creation of the world, it’s, “Let there be now.” God is still saying, “Let there be light in the midst of our darkness.”

What does church community look like for you guys in this season of your life?

LG: It’s definitely challenging. It’s very challenging. We have church community in Denver. It’s interesting, we were just talking about this. Even when we’re home and we get to go to Bloom just for small moments, it is so refreshing. We try to go home to Bloom as much as possible. If you don’t create that church community, you know something is missing in your soul. When we’re on the road, we try to have communion before shows. It is difficult when you’re living on a bus. How do you “be the church”? It’s definitely a challenge, but I think it’s something worth doing. It’s something we’ve had to strive for; loving the people on the bus, serving like that is church.

MG: Yeah, we haven’t figured it out. This year has been out of balance. We’re trying little things like taking communion together, and that does help, but we probably have a little repenting to do for our use of time this year. We miss our church, for sure. We’ve been gone too much.

Ghosts Upon the Earth is a concept album—what are you hoping people take away from it?

LG: It’s important for people to know it’s a story. I just read an email this morning from one of the girls at Bloom. She was just sharing how she had been in kind of a dark place and she said, “I’m sorry this has been so depressing.” It was interesting, because her sharing her pain—one of her best friends had died from cancer—just her talking about it was interesting how she didn’t even talk about hope, but her sharing her story brought me hope. I’m sitting in this coffee shop and almost bursting into tears and all these people think I’m kind of crazy. That’s kind of my hope with this album is that our stories help each other. Even if it’s not the best story, sharing your story helps. I hope people can hear [that] through this album. My hope is that it brings them hope. There’s so many more people who struggle than we know, and it’s OK to have questions, it’s OK to struggle. My hope is they can relate, they can relate to the stories we’re thinking about.

MG: There are just moments in my life and there are a few pieces of music that consistently do it, but as I look back there are just moments of art, of film or music that just came at the right spot for my soul, and really opened up my soul. This music did that for us. I take really seriously these albums. We had a long list of songs and we put a lot of work into what we wanted this album to say. Really the reason for that work—what these songs do for me is good. I wanted every song to feel like something. I didn’t want filler and casual—that’s not what we were going for. My hope is that other people’s souls would feel that and open up as well.