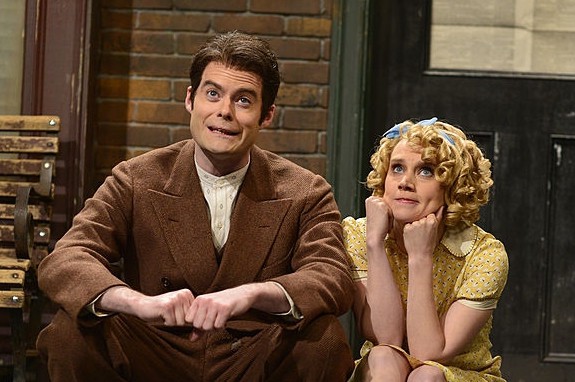 If you’ve ever wanted to see SNL allum Bill Hader and SNL current Kate McKinnon as a happily married fish couple, you’re in luck. The comedians will be in the new Finding Nemo sequel, Finding Dory, providing the voices of “a fish couple that Dory briefly encounters along the way.” The cast, obviously including Ellen Degeneres and Albert Brooks reprising their roles as Dory and Marlin, is an impressive lineup of gill-bearing stars. Modern Family members Ed O’Neill and Ty Burrell will play an octopus who’s missing a tentacle and a whale respectively, Eugene Levy and Diane Keaton will lend their pipes as Dory’s parents, Idris Elba and Dominic West are a couple of sea lions and Kaitlin Olsen will voice a lovable whale shark. We’re still holding out for Seal to voice a smooth, R&B-singing seal but there’s no word on that yet.

Meanwhile in ‘Jeopardy’ News, Contestants About to Include Louis C.K. Jonathan Franzen and Anderson Cooper