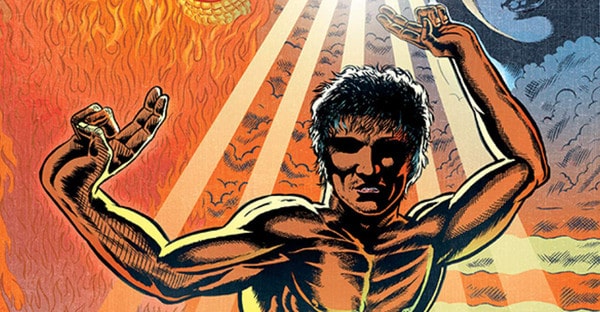 It wasn’t that long ago we were treated to a proposed DC Comics series called Second Coming that would have brought Jesus back to Earth to grapple with a planet that hasn’t done so hot in his absence. That comic was eventually canceled in the wake of an online petition of angry Christians calling on DC to yank the comic from the shelves before anyone had a chance to read it. But if those Christians’ concern was fidelity to the biblical source material, they ain’t seen nothing yet.

A new series called Jesusfreak has been announced from Image Comics. While Second Coming seemed like it was at least interested in exploring how Jesus might fare in the modern world, Jesusfreak is remaking the Son of God at a much more conceptual level, turning Jesus of Nazareth into a barbarian warrior type.

The graphic novel is being created by writer Joe Casey and artist Benjamin Marra. “Jesusfreak is less inspired by any strict religious traditions and is instead more concerned with exploring the unique tension that exists between depicting a mythical figure and a historical figure – a tension that is compounded when, for many, they’re considered the same person,” said Casey. “It’s also a chance for Marra and I to indulge in a specific style of hard-pulp storytelling that we think perfectly fits this material.”

Unlike Second Coming, we actually do have a few pages of Jesusfreak that were posted at Deadline to use to make a judgment and, well, it looks …uh, interesting!

Head over to Deadline to see the rest of the savage action, including Jesus’ battle with a giant talking alligator-like creature. “Violence—as depicted in most genre fiction—is usually meant to be symbolic of a deeper thematic struggle occurring within the story,” Casey told Image. “In our book, it’s no different. In a visual medium like comic books, you want to convey conflict in as visceral a way as possible. The so-called ‘historical Jesus’ certainly would’ve lived a life of conflict, preaching certain beliefs at a time when doing so would’ve gotten you killed. The fact that Jesusfreak presents that character’s journey in such an obvious genre setting meant showing a level of violence that we felt was true to both the genre and the character.”

Jesusfreak will officially release on March 20 (if Image doesn’t cancel it beforehand).

20 Years Later, ‘The Matrix’ Is Much More Than a Sermon Illustration