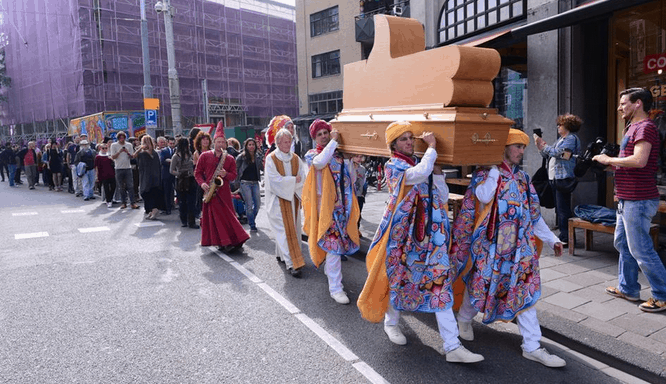 The oldest church in Amsterdam—the famous Oude Kerk—recently hosted a massive funeral … for the Facebook “Like” button. The campaign, which also included the launch of the trippy “Like4Real” website, serves as a high-concept art project meant to raise awareness about the rise of misplaced online activism. The project uses various global religious-like symbols to promote “Enlikement”, which is encompassed in their manifesto (you can read it in its entirety here):

Not too long ago, this development led to a miraculous occurrence. A new technology turned the act of Liking into a commodity, hence into a symbolic totem and a new belief, at a time when faith in religion and our monetary system is crumbling … And now society has forgotten the real act of Liking … And instead of taking action to make change happen, our activism has been reduced and confined to the square inches of our computer screen activism has become clicktivism … We as a society need to focus on real actions and intentions, rather than the symbolic reward bestowed on things by a mouse click.

What Does it Actually Mean to ‘Connect With God’?

Culture Reaches Peak Hipster With Beard Combs Made of Records