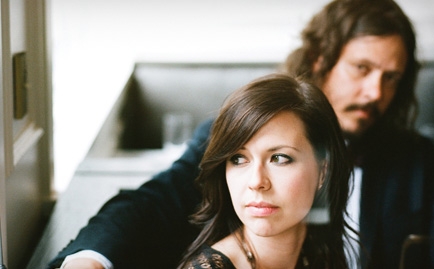 Spend a few hours with the Civil Wars, and one thing will quickly become clear: Joy Williams and John Paul White like to tease each other. A lot. Actually, if you get them going on the right issue, you can make this observation in a matter of minutes.

The dark-haired musical pair is hanging out in the green room in Grand Rapids, Mich., just two hours before they’re due onstage to play a concert, and they’re tossing out barbs with the nonchalant ease of that proverbial old married couple. Today’s jousting topic: White’s resemblance to a certain A-list celebrity.

“People always come up to you in Whole Foods and ask if you’re Johnny Depp,” Williams says to her band mate with a laugh, confirming the sentiment shared by hordes of online commenters that White’s mussed hair and mustache make him a dead ringer for the chiseled actor.

“I’ll know I’ve made it when people start going up to Johnny Depp and telling him he looks like John Paul White.”

We’ve already hit the first paradox enveloping the Nashville-based folk music duo: they’re married, and they might bicker like an old married couple … but they’re not married to each other.

A second puzzle is that, prior to the sudden success they’ve linked arms with as the Civil Wars, Williams, 29, and White, 38, each nurtured wildly different solo careers for more than a decade a piece: she as a precocious Christian contemporary music star, he as a singer-songwriter with roots in the rich cauldron of Southern rock and blues. In short, they’ve found success, but there’s nothing sudden about it.

Together, they’ve ditched their pasts to create music that not only defies genre—even the best critics have only been able to hash together a label like “Americana chamber folk”—but music that prowls lyrical themes from faith and crime to sex and absinthe, without apologizing or pearl-clutching.

“We sing gospel songs sometimes,” Williams says with a smile, “but we also sing about cigarettes.”

It’s this combination of sterling songwriting, smoky subject matter and White and Williams’ chemistry that has electrified the interest of thousands of Civil Wars fans, but that has also raised just as
many questions. Are they a Christian band? Are they a “we’re Christian, but don’t call us Christian” band? But it’s Joy Williams! Oh, they’re one of those married couple bands? Wait, they’re not together?

Even if the Civil Wars can’t escape being soaked in curiosity, their success hinges on one monstrous factor: their Southern-tinged style of music is unabashedly listenable—and relatable.

“Joy and John Paul have a unique package in that they’re an ideal mix of talent, artistry and sellability that very few artists—Christian or otherwise—possess,” says Matthew Paul Turner, a former editor for CCM magazine who has tracked Williams’ career since its genesis. “They’re making the kind of music—a rootsy pop-driven (and often spiritually poignant) Americana—that not only entertains, it fills an audience with something more than what’s being played on the radio.”

After being around the duo, you also instantly pick up on their aura of humility. Williams immediately makes you feel welcome, greeting everyone in a five-yard radius with sincere questions about how their day went. White’s smile is easy and brimming with authenticity. For a second, you forget you’re talking to a pair that’s currently hovering somewhere around the apex of the iTunes download charts.

They’re just as modest when asked directly about their remarkable success in the music scene.

“Most of what’s happened to us has been out of the blue,” White says.

“We just keep pinching ourselves,” Williams adds. “Just seeing the number of people grow who are interested in our music is exciting.”

Thanks to the success of February’s Barton Hollow, Williams and White’s country-tinged act hit a publicity bang, galvanized in large part by Internet buzz.

“We’ve each been in the industry for over a decade, and we cut our teeth in different ways,” Williams says. “We’ve worked really hard, and I would never say we deserved this, but we’ve sweated and cried and put a lot on the line to do music, so to see momentum growing organically in a way we never thought makes us so thrilled.”

While their individual careers are reeled out over a long series of years, the Civil Wars’ story starts in 2009, when Williams and White found themselves in the same studio for a songwriters’ tête-à-tête in Nashville. Seizing upon the creative connection both felt as they worked together, they ventured out to play a local gig. It was a fortuitous choice: Charlie Peacock, the famed Nashville music producer, happened to be in the audience. Intrigued, he invited them to record at his house.

“They are so sublime and rich live,” Peacock says of Williams and White, “that you just want to take a beautiful picture of it and try to stay out of the way.”

Speculation on their apparent sexual tension has comprised much of the attention lavished on Williams and White. Most people initially think they’re married to each other, the pair admits.

The speculators have a point. For a pair obviously smitten with their respective spouses—White has been married for 15 years—Williams and White certainly do appear to have a certain type of closeness. They finish each other’s sentences and intimately poke fun at each other’s habits and quirks.

But the twosome both insist that because they’re not involved romantically, it makes them better musicians.

“If we don’t agree, one of the many hundreds of thousands of benefits to not being a romantic couple is that we can disagree and we can talk it out, and we don’t need to worry about how we’re going to feel later, relationally. We don’t have to use kid gloves,” Williams says.

“For the past 10 years we’ve been writing love songs with other people. I’ve done that all my life. We usually end up having conversations about the good, the bad and the ugly of relationships with each other,” White says.

“We have a different relationship as songwriters than most people,” White says.

“Songwriters are very observant and they want to get to the heart of things. It could be someone you just met, and you start getting very vulnerable: ‘This is what makes me mad!’ You couldn’t have those kinds of honest conversations with someone you were in a relationship with, or if we did something else for a living.

“It’s the most natural thing in the world to have those conversations with Joy,” White says. “Plus, we’re very good friends, and so it always works. It feels more like brother and sister to me.

“And that happens on a very regular basis,” Williams says, laughing.

As the two seek to expand beyond the confines of piety and genre, they’re helped by the fact that much of their music’s charm undoubtedly comes from its earnestness; as the Civil Wars, they pen the kind of roots-style Americana that goes places this millennium’s country music has been too mired in pop gimmicks and stock-issued twang to tread. While their lyrics are polished and their songwriting is finely spun, Williams and White tell stories of the raw, rough edges of love and life. The gem of the Civil Wars’ music, and what’s undoubtedly beguiled their fans, is its authenticity.

Their themes transcend age and gender; the inner struggles and relational tumult they sing of are ones that on occasion saddle us all. As Williams puts it: “Love and sex and faith and death—everyone’s trying to make sense of those things.”

This article is adapted from the cover story of the July/August 2011 issue of RELEVANT magazine.

Why I Don’t Go to Church