The first year of marriage is different for everyone. Some couples experience financial stress, others go through communication hurdles and still others encounter unexpected difficulties with careers, health or family. Some couples struggle with what’s next, while others know exactly what the plan is. But for Harold and Rachel Earls, authors of “A Higher Calling,” their first year of marriage was unlike any other.

During their first year of marriage, Harold decided to start marking things off of his bucket list, one of those things being to climb Mount Everest. RELEVANT was able to hear a little bit about their new book and how climbing Everest has changed them forever.

How did you two meet in the first place? What drew you to each other?

HAROLD: It all started when I sent an awkward Facebook message to Rachel. For more than a year, my best friend Tommy had been telling me about his redheaded cousin. I dismissed it by saying that I wasn’t into redheads. Eventually he showed me a picture and she was beautiful, but what really got my attention was when Tommy vouched for her character and spoke of the way she loved the Lord. Yes, Rachel was a total knockout, but there was so much more that drew me to pursue her. It seemed our characters, values and what we were chasing in life were aligned. So I reached out to Rachel on Facebook. In hindsight, it was a really lame message, but somehow it worked!

How did Everest become a part of your story?

The Everest dream started to really formulate in my mind seven months before we were to get married when I was still a cadet at West Point daydreaming over my bucket list. In bold at the very top of my list was: Climb Mount Everest. Despite my zero climbing experience, I just couldn’t get Everest out of my head. Although I would need a lot of training, I wanted to put myself into that extreme environment, into the Death Zone, to see what I was truly made of. It was a mind-consuming idea that I just couldn’t shake. For better or worse, I was going to drag Rachel into this crucible experience together in our first year of marriage. We had no idea what our relationship would be faced with later on the mountain. 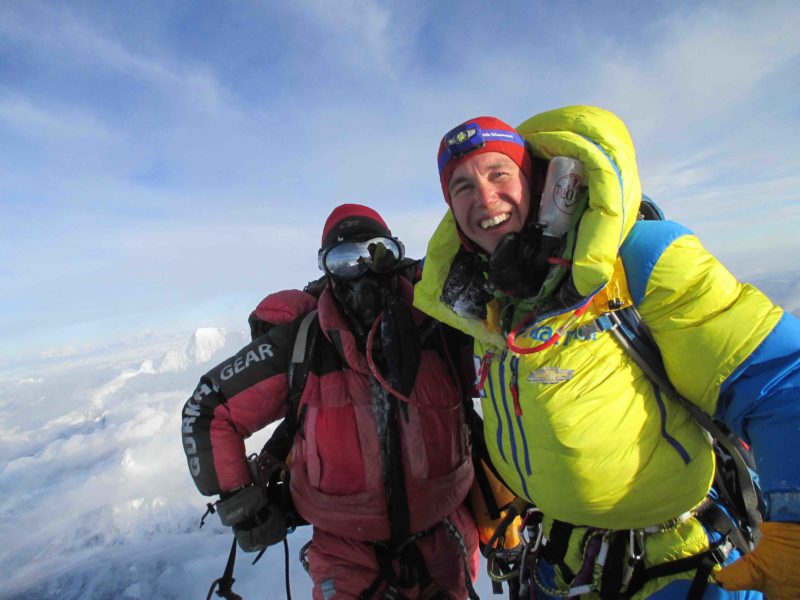 “Climbing Everest” is basically shorthand for “the hardest challenge in the world.” Is it as tough as people say it is? What’s the biggest misunderstanding people have about what it’s really like to climb Mount Everest?

It was grueling and terrifying and a lot more work than most realize. The most dangerous part is the descent. I left a note in my journal the first time I saw Mount Everest on April 16, 2016, that read, “This towering beast in the background is the meanest thing I’ve ever seen. I’m worried, and I’m humbled. I could share this with her (Rachel), my best friend and biggest supporter. But I want to protect her from the knot in my stomach, the nerves constantly rumbling inside, and the nagging questions: What am I doing? and What have I left behind?”

Your book compares the challenge of summiting a mountain to personal challenges you both have faced. What are some of those challenges and how did your experience with Everest help you prepare for them?

Communication has been a key challenge and one we really came to understand the value of from the Everest experience. Whether you are thousands of miles away or in the same house with your spouse, lack of communication can cause unnecessary strain and stress on a relationship. Also supporting individual goals are important, however, putting the relationship first is paramount.

What role has your faith played in overcoming your personal challenges in your life?

We believe faith is strengthened through the struggles we face when we rely on God and fully trust Him with the outcome. Something Rachel wrote in our book that was so powerful and has always stuck with me since is, “It would have been easy to let fear take over, but I’m not going to allow fear to write my story. I won’t be controlled by my current circumstances. Tonight, I choose faith over fear. Just like I did this morning. Just like I will do again tomorrow and the next day and the next.”

How has your faith changed over the course of your marriage?

How we communicate with each other has been the most significant change. Looking back at the beginning of our marriage and the time I was on Everest, I realize that I took for granted how strong Rachel’s relationship was with God and used it as an excuse for thinking, “Oh, she’ll be fine.” So I didn’t do anything to help her continue to grow in her faith while I was gone. I knew that she would remain close to God. The problem is, I failed by not communicating with her and made these assumptions. What if her relationship hadn’t been going well, and she was fighting some internal battle? We never had this conversation, so frankly I had no idea. A big thing I have learned more recently, years after Everest, is that everything is hard to do in solitude. Whether it’s pursuing your faith or achieving your dreams, it doesn’t matter what you’re trying to do. You need your spouse by your side. You are a team. If not, there is the risk that you’re either going to be miserable or fail in your own faith.

What do you wish someone had told you before you got married?

The little moments can turn out to be big moments, the life-changing ones.

What do you wish someone had told you before you tackled Everest?

I wish someone had said, you and Rachel are a team. I was too focused on my climbing team, which was important to my short-term goal of summiting Mount Everest, but I was not focused on my long-term goal, and my lifelong relationship with Rachel. No matter the mission, what I’ve learned from Everest is your teammate in life is the No. 1 priority.

You can purchase A Higher Calling here.