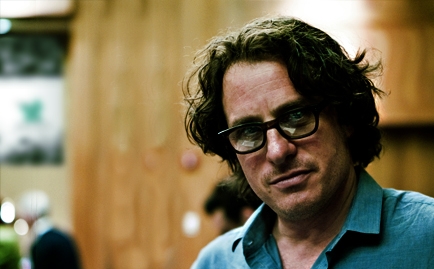 Davis Guggenheim has had a hand in some of the most critically acclaimed television shows, documentaries and movies of the last decade. His credits as a producer and director include everything from the recent documentary It Might Get Loud, to Training Day, 24, the Oscar-winning An Inconvenient Truth, The Shield, Alias, ER, Deadwood … and the list goes on. Guggenheim talked with us about the subtle art of interviewing, what it means to "find the moment" in a film and the differences between Jimmy Page, Jack White and The Edge.

Editor’s Note: To listen to more of this interview, check out the Feb. 5 RELEVANT Podcast here.

In It Might Get Loud, you bring together Jimmy Page, Jack White and The Edge for a two-day guitar experience unlike any other rock documentary in the past. Could you choose just one to be in your band?

No, I couldn’t. To me, making movies is sort of an act of falling in love, and I fell in love with each of them. What was so amazing about this movie is I got to know all three of them really well, and they’re all amazing in really different ways. Jimmy is just totally improvisational, totally in the moment. Anything can happen, and you’re riding this great big wave of spontaneity. Jack is this guy who is always writing, and he’s always creating, and he’s always doing something completely different and unique and reinventing things. And The Edge is like this quiet craftsman who is really living this deep, and thoughtful and zen-like life and finding his songs through that experience. So I couldn’t choose. I don’t make music; I’m a documentarian. So if I could pick one, I’d be happy.

How do you sit with someone like Jimmy Page, or The Edge, or Jack White for two days, asking him questions and digging through the closets of his own story? How do you gently bring their own stories to the surface without scaring them away?

My father made documentary films, and I started working for him at a very young age. And at a certain point, I think I was 17 or 18, I got to do my first interview. I was very excited. I stayed up all night, and I made a list of all the questions I would ask. And the next morning, I proudly presented my list in front of him. And he looked at them very carefully, read them all through, and goes, “I only have one piece of advice for you.” And it’s the only piece of advice he ever gave me. He goes, “Don’t have any questions.” And of course, if you’re doing an interview you have to ask questions. But what he’s saying is, laying out a grand design for all the things you want to ask almost kills the idea of what a great interview is. A great interview comes from a conversation. And if you keep asking questions that are on your list, you’re certain never to get there, because each question yanks you out of that spontaneity. It yanks you out of that path. Too many directors get in their own way. And certainly, with documentaries, ones that are pretty boring tend to be ones that are written ahead of time. And if you do that, you’re going to make a film that pretty much follows what’s on Wikipedia. I’m not interested in the Wikipedia version of Jimmy Page. That’s pretty much how everyone understands him. I’m interested in getting inside of his head, whatever that is.

All three of these guys came off like students of music rather than professors of music. Are there any themes that seemed to represent the common denominator of greatness between them?

I think the great surprise was, as musicians, they know how to listen. Like, you can’t be in a band unless you know how to listen, and to react, and to be open to the person sitting across from you who’s playing a different rhythm and a different instrument. And that was interesting because they are so different. U2 came up as a band that was directly opposed to Led Zeppelin, wanted nothing to do with that kind of music, so you wondered if Jimmy and Edge had anything to say to each other. But they were open to each other, because they’re musicians, and they have different performers coming out all the time, and you’ve got to react and listen and be adaptive. But it ended up being really quite lovely to see how they all grew in the presence of each other, because they could just take in what the other was offering.

How do you know when you’ve found “a moment” in the film?

It’s like someone saying, “How do you know when you fall in love?” I can’t tell you, but you know it. And you just hope and pray that it happens. And I was lucky on this movie that it happened over and over again. When you see it, get out of the way. Let it happen.

So are documentaries trying to save Hollywood?

There’s a renaissance with documentaries right now. I just came back from Sundance, and there were so many great documentaries in so many different ways. They’re changing wildly because people are pushing the boundaries of what is acceptable and what is good. Some are frustrating, and some are terrible, and some are brilliant and that’s a great place to be if you are trying to tell a story. If you are trying to talk about studio movies right now, you would find the opposite. Hollywood is, generally speaking, in a rut in terms of the movies they’re making. And it’s hard to be an artist, someone creative in that world, though people are doing it. There are some great movies nominated this year. But on the large part, it’s really hard to find something that’s unique and creative that the system won’t crush once it starts to process it. Documentaries are trying to do what documentaries are trying to do. They’re not trying to save Hollywood. But I think there’s a reason why people are gravitating toward them right now. And the other thing is, you [get to] make a movie that actually might make a difference. I worked on An Inconvenient Truth, and the film I’m working on now is about the public education system. I’m driven by making a great movie, but I also want this movie to make a difference, and to make better schools and to shake people out of their complacency. And if that happens, that’s better than watching the box office for an action movie that anyone else could have directed.

Why do you feel like you have to make movies that matter?

Well, I don’t have to. The last movie was It Might Get Loud, and that was not that kind of movie. I don’t want to keep making the same movie. But when I see an issue that you can tell a good story about, that you can really get people fired up [about], that’s the best. The experience of An Inconvenient Truth was the most incredible experience I’ve ever had because people loved the movie, and it actually changed how congressmen voted, and how people behaved, and it woke people up and people really were moved by it. And you can’t ask for anything better than that. And I’m hoping that’s going to happen with this public education documentary but it’s not like I have to do it, or I have a special motive for it. It’s what is so exciting about it, what keeps me up every night.

To listen to more of this interview, check out the Feb. 5 RELEVANT
Podcast here.

When Your Teaching is Criticized