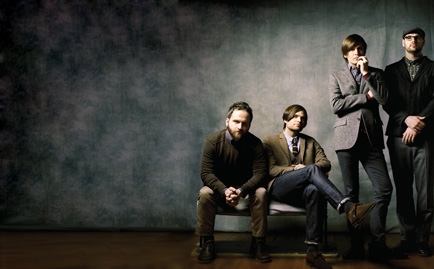 Death Cab for Cutie’s Ben Gibbard isn’t shy. His wry, class-clown persona onstage is by no means a put-on. One on one, he still exudes that same charisma—except that he’s also the boy next door who just happened to have his nose in a book and sky-high ambition. Even when approached with questions of faith—which Gibbard admits he doesn’t have all the answers to—his confidence and charm remain unshaken. “[Faith’s] something I always find myself meditating on,” he admits. “I don’t want to falsely believe in something solely so I can jump to the front of the line for whatever this awesome place is [where] we go after we die. I kind of feel like if there was a God, [He] would appreciate the fact that I just don’t know. The vastness of that idea is so beyond my comprehension that I feel like if there was a God, then that God would accept me saying I’m not able to believe because it’s so outside of my ability to understand it. I understand that’s where faith comes into play.”

A lapsed Catholic, Gibbard suggests his doubts stem from a tradition-seeped, works-based salvation upbringing. “It’s not like I can decide one day to rid myself of the emotional shackles of that religion,” he says, voice free from the bitterness one would usually associate with such an incriminating statement. “In Catholicism, it’s so drilled into you that your actions will determine if you go to a place where you burn for eternity, or you will go to the most wonderful place in the world. And of course in Catholicism there’s the notion of purgatory, which is the absence of God—it’s just like a waiting room, basically. There’s no fun, but there’s no fire either.”

While Gibbard is content to question, and admits the search is still ongoing, he doubts his answers will be handed to him by organized religion. “Faith in Catholicism is based so much in fear that I can’t live with faith, if faith is fear,” he says, simply.

Instead, Gibbard chooses to lay his faith in the goodness of humanity, or rather the idea of a built-in moral compass. “I believe people for the most part have a built-in sense of right and wrong,” he says. “Some of that comes from being brought up Catholic, but I think even more so, as I’ve become an adult, you just kind of know when you’re doing something wrong. It’s very rare when you find yourself in a situation and either a) you don’t realize what you’re doing is wrong, or b) upon reflection you can’t come to that same conclusion.”

It’s the same ability to see both sides of the equation that Gibbard applies to his craft. Alongside Nick Harmer (bass) and Jason McGerr (drums), and multi-instrumentalist Chris Walla (with whom he shares songwriting duties), Gibbard creates songs under the inscrutable, Magical Mystery Tour referencing name, Death Cab for Cutie. Theirs is a world of melancholy-tinged optimism, a place where love exists (even if it might not exist for you), and everything from glove compartments, to photo booths, to Styrofoam plates are milked for maximum heartbreak potential.

Since their 1998 debut, Something About Airplanes, the band’s mellow rock and rainy-day optimism has become synonymous with the Pacific Northwest. Now on their seventh full-length album, and entering their second decade as friends and bandmasters, the rain shows no sign of stopping, but for the first time there are a few rays of light poking through the clouds—even if Gibbard warns there aren’t exactly any rainbows. “There’s sunlight peering through the windows of [Codes and Keys, which released in May]—I think people are going to naturally see this as a happy record from start to finish,” he says, preempting the idea it was written in response to their significantly darker previous effort, Narrow Stairs. “I honestly don’t really see it that way. I definitely think there are songs like ‘Stay Young, Go Dancing’ that are obviously very light pop songs. There are a couple of those moments on the record. But I see the record as being a very balanced record emotionally. And that’s something I’m kind of proud of.”

Perhaps part of that optimism stems from Gibbard’s new location—Los Angeles—or his new life partner—wife Zooey Deschanel. Gibbard dismisses both as sole deciding influences, particularly when it comes to his new hometown. “I was trying to cheer with everybody, but I felt nothing in my heart,” he jokes of seeing a game played by local baseball team the Dodgers. Perhaps his baseball love, at least, still resides in the Northwest. While quick to admit many will see the new record as a “marriage album,” Gibbard isn’t so flippant in dismissing the impact his recent change in status has had on both his life and art. “If [listeners] want to see this as a marriage record, that’s fine. In marriage there are moments of extreme happiness. There are moments of melancholy just like there ever was,” he says, his voice curling into an audible smile. “But I think marriage has brought me to a more balanced place in my life, and it’s reflected in the music.”

Even more than matrimony or maps, Gibbard credits the passage of time for the ever-evolving emotional content of his music, granting him perhaps the most un-rock ’n’ roll quality of all: perspective. “While being a touring musician and traveling a lot is part of who I am, it’s not the whole of who I am— and it shouldn’t be,” he says. “Wives and girlfriends and kids come on tour. It’s not like it used to be where it’s all dudes in the van. This is our world—we’re in a different point from that. There’s nothing wrong with that; it’s just that now we’re all in our mid-30s, there are things of equal or greater importance.”

“I can’t Google my wife”

Part of determining what is of value in life for Gibbard has come from figuring out what isn’t worth his time. As hinted by the dismissal of technology in Codes and Keys track “Portable Television,” he recently discovered a little bit of pop culture can go a long way.

“We have the ability to shut that stuff off if we want to,” he says. “We’ve created this perception within ourselves that we have F.O.M.O.—the fear of missing out. We have this fear that if we don’t go to work every day and we haven’t seen these same videos on YouTube, or we’re not up to date on indie rock, or what celebrity did what to who, that somehow we’re missing out on something valuable in life.”

While strong words, Gibbard admits they can be difficult to put into practice when your spouse is a notable actress, your previous album debuted at No. 1 and your current album fought Lady Gaga for the top spot on the charts. “I can’t read gossip sites. I can’t Google my wife,” Gibbard exclaims, exasperated at the thought. “These aren’t things I should be doing. I think one of the ways I’ve been able to maintain some kind of normalcy in my life is that I’m not always gawking at the gawkers.”

So when one has reached the success Death Cab for Cutie has in recent years—graduating to a major label, soundtracking sparkly vampires, creating a live, scripted music video—how does one maintain momentum? Doesn’t it get, well, boring? “Being a songwriter is like being a magician—there’s nothing there and then there’s something there,” Gibbard says. “It defies the law of physics. So as long as that is still exciting to me, and there’s still something to discover within myself as a songwriter, as long as there’s something to enjoy in the process of making records and going out as a band, I’ll do it forever.”