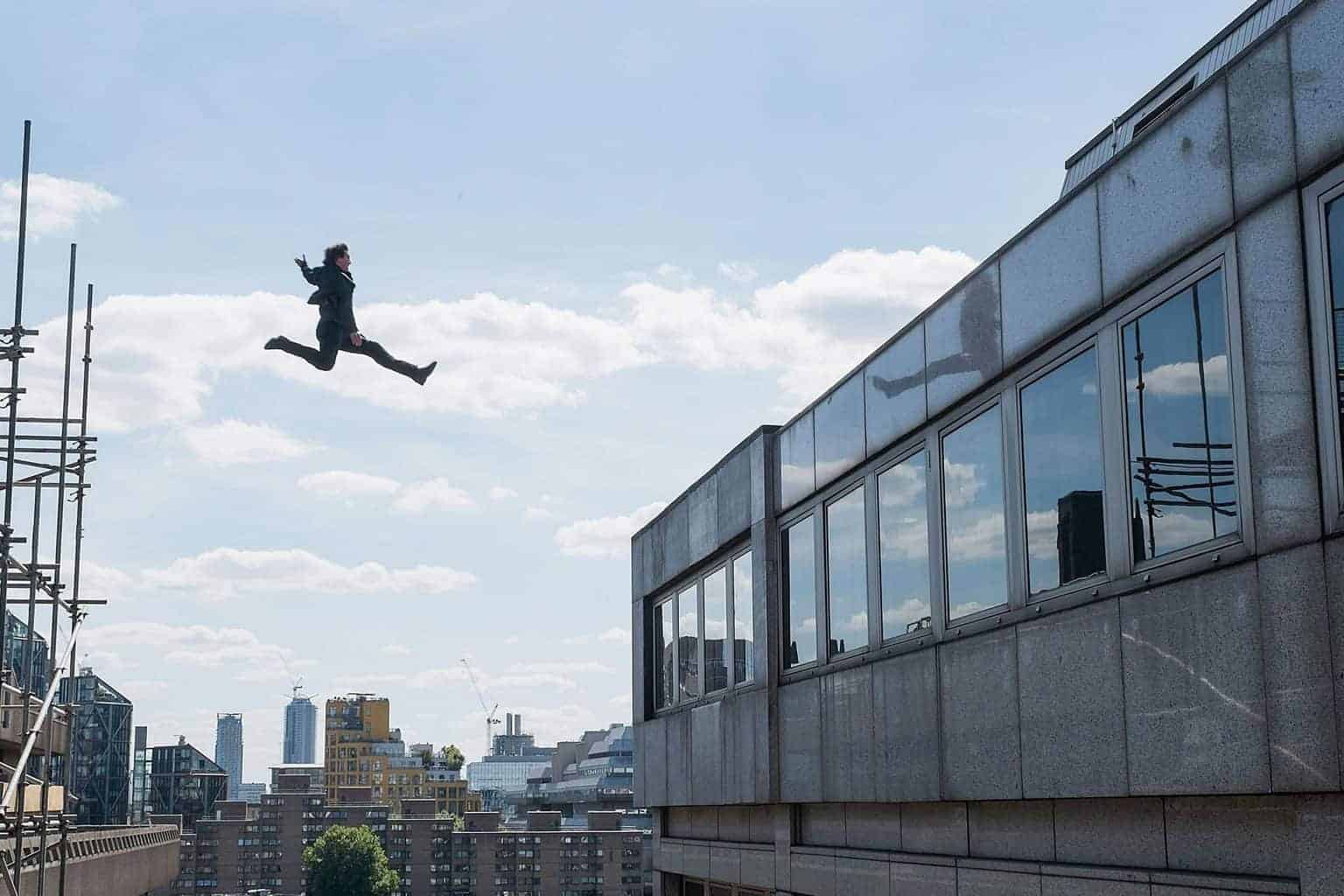 Tyler Daswick: Josh, we both loved Mission: Impossible – Fallout, and a big part of that was Tom Cruise continuing his streak of doing absolutely insane stuff for our entertainment. The dude jumped out of a plane, rode a motorcycle against traffic around the Arc de Triomphe and went toe-to-toe with Henry Cavill’s mustache. It had me thinking: What’s the craziest thing Tom Cruise has ever done?

Josh Pease: That’s a super difficult question Das because arguably the craziest thing Tom Cruise has ever done is simply be Tom Cruise. You don’t change your name to “Cruise” unless you’re planning to endanger your life on the regular.

Das: I just Googled this. His original name was “Thomas Cruise Mapother IV.” That sounds like the name of your rich uncle’s yacht. Anyway, you were saying?

Josh: Ha. Mapother sounds like the Winklevoss Twins’ runt of a younger brother; but what I was saying was that I’d argue this scene from Mission: Impossible 2 is the genesis of Crazy Tom Cruise.

Das: His hair, no doubt. Tom Cruise’s hair gives the best performance in Mission: Impossible 2. That’s a great scene, but I think Cruise has topped it in the Insanity Department.

Take a look at the HALO jump from Fallout. This is when Tom Cruise jumped out the back of a C-17 Globemaster cargo plane and plummeted 25,000 feet to the ground in one continuous shot (which, by the way, was three shots stitched together, which actually makes it more impressive because that means they had to jump triple the times so they’d capture all the footage. I looked it up—they spent a month on this scene. Cruise did 100 jumps).

Josh: A hundred jumps is insane, and absolutely worth it, because that scene is harrowing and awe-inspiring and great. BUT for an even more intense edition of Crazy Cruise, I think you have to go with the Burj Khalifa “sticky glove isn’t working” scene from Ghost Protocol.

Look at what Tom is doing there. I mean that’s just … that’s not normal Das. I’d argue that M:I 2 launched a thousand Crazy Cruise Ships, but hanging from the side of a building a few thousand feet in the air is the purest distillation of Cruise’s “I’m a superhero IRL” mentality we might ever see.

Das: My favorite thing about that scene is no matter how you describe it to someone who hasn’t seen it, there is no way you can over-hype it. It’s a jaw-dropping stunt. I remember seeing this movie in the theater, and when Cruise stepped onto the ledge and the camera peeked over his shoulder to see how high they were, some people were legit sick right there in the theater. Meanwhile, Tom Cruise was actually the guy climbing the building. I’m ready to call it. This is the Craziest of Cruises.

Josh: Then we are agreed! So, here’s a question for you: When did “Fairly Normal Movie Star” Cruise turn into “I’m Going to Literally Jeopardize My Life in Each Movie” Cruise? Because I don’t remember him doing this sort of crazy stuff in the early years.

Das: Hmm. Interesting. Let me dive into the IMDB. Your M:I 2 pick was back in 2000, so let’s see what came before that. In the ’80s and ’90s Cruise did Jerry Maguire (he’s a full-on movie star in that), the original Mission: Impossible (determined, but not crazy), Born on the Fourth of July (only plays a crazy guy), Rain Man (five stars), Color of Money (good at pool, the least-crazy sport) … there’s more, obviously, but I’m not seeing many appearances from our friend Crazy Cruise back in the day.

Josh: Totally. The era you’re looking at is the era of Cocky Cruise, a different brand of Cruise entirely. The Cruise of Top Gun, Days of Thunder and A Few Good Men is defined by that million-watt smile of his, which should make you want to punch him in the face, but is somehow charming instead. After the Cocky Cruise era, and before M:I 2, Cruise pivots into his “I want an Oscar” phase and makes Magnolia and … holy crap, I just figured something out.

Das: Is it how he made his hair look so good in Mission: Impossible 2?!

Josh: Ha. No. So in 1999 Cruise starred in the film Eyes Wide Shut, which still holds the record for longest, continuous film shoot: 400 days.

Das: Yeesh, that’s a long time. I’ll make a comparison to help our reader friends: Shooting on Mission: Impossible – Fallout took only about 300 days, and there were plenty of breaks during that time, both of the work and bone varieties (RIP Cruise’s once-unshattered ankle).

Josh: Right, so during the filming of one scene during Eyes Wide Shut, Kubrick made Cruise do 95 different takes. Cruise goes from being THE Hollywood movie star to disappearing in London for over a year with Kubrick. There’s speculation the strain of making the movie marked the beginning of the end of his marriage to Nicole Kidman, for crying out loud. So Das, here’s my theory: All the truly “Crazy Cruise” stuff—both in real life and in the films—happens after this film. WHAT IF STANLEY KUBRICK BROKE TOM CRUISE?

Josh: Scientology? Never heard of it. [glances nervously over shoulder … soft whispers:] I don’t want to get sued Das.

Das: This discovery is worth the peril. I mean, Josh, we want to talk about Crazy Cruises? Let us not forget the time we saw Crazy Cruise in his fresh-from-the-chrysalis, fully-evolved form.

Josh: [unnaturally loud and stilted speaking voice] You’re a suppressive person and I’ve been instructed not to talk to you any longer. But seriously, in that video you see how Cruise seems to see himself as a real life superhero, and you see him acting on that post-Eyes Wide Shut. As someone with zero credentials as a therapist, I feel 100 percent comfortable definitively stating Kubrick broke what was left of Mapother IV, and left only pure, unbridled Crazy Cruise. Cruise stared into the abyss of Kubrick’s bleak, perfectionistic nihilism, and Das? The abyss. Stared. Back.

Das: This has become the Crazy Cruise origin story. I just showed up to talk about awesome stunts and maybe a goofy talk-show interview, but man, this thing is practically a historical document now.

Das: There’s only one thing left to do.

Das: You can be my wingman any time.

Josh Pease is a writer and speaker living in Colorado. Tyler Daswick is a senior writer at RELEVANT.

Matt Chandler: No, We Don’t Go to Heaven in the End

A Love Letter to ‘Casual’ and the Need for Messy Television