The thriller drama about a bipolar CIA agent who investigates a marine she believes has gone rogue swept the Emmys in a way that can only be described as plague-like. If you read my predictions list from last week, you’ll know I didn’t fare so well. But practically no one saw what was coming. Homeland stomped every other drama series with a Goliath foot and brought home a lifetime first of wins for its home network, Showtime.

Among the highlights: Jimmy Kimmel’s “in memorium” tribute to himself (complete with Josh Groban doing a One Direction piano rendition); the elaborate, interactive prank in which Tracy Morgan played dead for 20 minutes while Kimmel asked viewers at home to tweet, “OMG, Tracy Morgan just collapsed on stage at the #Emmys. Turn on ABC now!” (the prank sparked some 25,000 tweets); and Aziz Ansari’s British moment, which included the phrase, “Bloody brilliant, fish n’ chips, cheers.”

But while Jimmy Kimmel played perfect host and fashion had its ups and downs, the real meat of the night was in the actual awards. Here’s my recap—and honest opinions.

And the Emmy goes to … Damian Lewis.

Claire Danes was a lock for best actress, and for all intents and purposes, Bryan Cranston was set to stand next to her, the veritable Emmys prom king and queen.

And then the Damian Lewis bomb was dropped. You could almost feel Cranston sinking back into his seat, surprised, and when the camera panned to Cranston and his (supposed) biggest Emmys competition, Jon Hamm, their faces conveyed what everyone at home was thinking: There is no way that just happened. But happen it did. And even though it felt like a giant punch in the face to a phenomenal season four Breaking Bad performance from Cranston, Lewis delivered a charming speech, complete with British jokes and anecdotes about his children, who thought he was nominated for an “Emma.”

And the Emmy goes to … Claire Danes.

This was the one Homeland win that wasn’t such a shocker; Danes was a sure bet to take home the statue for lead actress. It’s been 17 years since her last nomination for My So-Called Life, and this time around she is married, pregnant and taking the award home. The lead actress category was stacked with talent, but Danes’ portrayal of bipolar CIA agent Carrie Mathison was a clear winner from the minute the nominations were announced.

And the Emmy goes to … Aaron Paul.

Congratulations, Emmys! You got one thing right!

Aaron Paul was the little meth actor that could in this category—almost everyone favored Giancarlo Esposito’s Breaking Bad character arc as Gustavo Fring to take home the statue. But I didn’t spend the entirety of season four screaming, “Someone give that man another Emmy!” at the TV for nothing. Paul has consistently delivered one of the best performances on television as Jesse Pinkman, and if the Emmys had to give Homeland every other award, I’ll be satisfied until next year knowing Paul was duly noted.

(Side note: I’d love to see a future drama category rewarding fantastic character arcs. While Esposito’s performance was one of the most talked about in the season, it seemed a little odd that he would be nominated in the same category as a series regular. I could see a new arena opening for characters who appear for fewer than a certain number of episodes in order to advance the plots of the main cast.)

And the Emmy goes to … Maggie Smith.

Can anyone begrudge Maggie Smith for winning? She was Professor McGonagall in Harry Potter, Granny Wendy in Hook and at 77 is one of the world’s most distinguished and beloved actors. It’s a shame Smith wasn’t at the Emmys to accept her award in person, because she’s one of the rare gems who would have be granted a standing ovation. Of any of this year’s winners, Smith perhaps deserved it most, in the same kind of way that Julie Andrews would be deserving of the “greatest human ever created” award.

And the Emmy goes to … Homeland.

To just put it clearly: Mad Men was robbed.

Almost everyone wanted Mad Men to win. I thought they could. I thought the series deserved a record-setting five consecutive wins in the category. And I thought that if any Mad Men season was going to win an Emmy for best drama series, it would be season five—the flawless, immaculate, groundbreaking season that solidified it as one of the best shows to ever grace the airwaves.

And I thought even if Mad Men didn’t make history, Breaking Bad would take it home for AMC. That would have been a deserved win, too. But early in the show, as Homeland started sweeping the drama categories, I started to get worried. When they snagged drama actress, actor, writing, casting and editing, I got defensive. There’s no way something other than Breaking Bad or Mad Men could win for drama series, right?

And just like that, the Emmys’ love affair with AMC’s impeccable dramas was over, and the entire Twitterverse was sent off to use the acronym SMH (shaking my head) in the most appropriate context ever.

With one win, Two and a Half Men took home more Emmys than Mad Men. If you’re counting, that means Mad Men took home none. Zero. Which is about as unjust as the fact that Here Comes Honey Boo Boo got renewed for a second season while Arrested Development got canceled back in 2006.

And the Emmy goes to … Jon Cryer.

The best part about Jon Cryer winning lead actor in a comedy is that Jon Cryer didn’t even think Jon Cryer should have won best actor in a comedy. His first words upon receiving his statue and engaging the microphone were, “OK, OK, don’t panic, people. Something has clearly gone terribly wrong.” Up against Louis C.K., Alec Baldwin, Don Cheadle, Jim Parsons and Larry David, it was obvious even Cryer’s joke may have been truer than he knew.

The only rationale I can come up with is that the Emmy voters were giving Jon Cryer a pat on the back and saying, You put up with Charlie Sheen for eight seasons. You probably deserve something. Either that, or not having a Modern Family cast member nominated in a comedy category totally threw the judges off.

And the Emmy goes to … Julia Louis-Dreyfus.

The Emmys love Julia Louis-Dreyfus and will take pretty much any opportunity to praise her, including her acting in the freshman series Veep. Louis-Dreyfus proved herself worthy of the prize with her show-stealing acceptance speech, when she “accidentally” read fellow nominee Amy Poehler’s speech on stage after the two mixed up their notes: “First of all, I’d like to thank NBC, Parks and Rec, my beautiful boys, Archie and Abel.” Camera cut to a fake-horrified-looking Amy Poehler, who quickly ran up on stage to swap papers—but not before adding her own ending to Louis-Dreyfus’ thank yous: “And isn’t it a shame Amy Poehler didn’t win … ?”

And the Emmys go to … Eric Stonestreet and Julie Bowen.

These categories were about as much of a toss-up as you can get, with four out of six supporting actor nominees being from the Modern Family cast and two of the six supporting actress nominees joining them. Someone from Modern Family was sure to win, and since various members of the cast have snagged wins in these categories before, it really could have been anyone. Can we get a nomination for the adorable Aubrey Anderson-Emmons, who plays Lily on the show, next year, though? The kids of Modern Family deserve some love, too.

And the Emmy goes to … Modern Family. 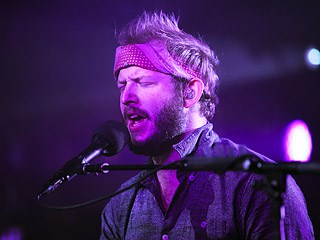 Bon Iver is Breaking Up With All of Us