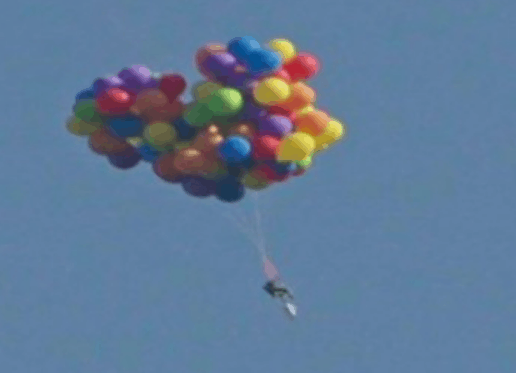 Canada, the country where somehow Nickelback remains legal and riding a moose across a lake is against the law, is now cracking down on another so-called “crime”: Strapping more than 100 helium balloons to a $20 lawn chair and flying thousands of feet in the air to promote your cleaning business. Twentysomething Dan Boria piloted the Up-like creation carrying a banner advertising his cleaning company and learned the hard way that the Canadian legal system makes no sense whatsoever. Though high winds blew him off course and he missed his target of some local chuckwagon races (which are evidently a thing in Canada), Boria has managed to drum up some publicity for his company.

He’s made international news, but only after being arrested by the Canadian fun police who charged him with “mischief causing danger to life.” Despite the arrest, the Canadian hero is still in good spirits after being released on bail. He told The Calgary Sun, “I can’t specify the altitude I went to. I was looking down at a 757; it was a surreal experience … It was awesome. It was the most fun thing I’ve ever done.”

Know Before You Give

The 5 People You Should Never Marry