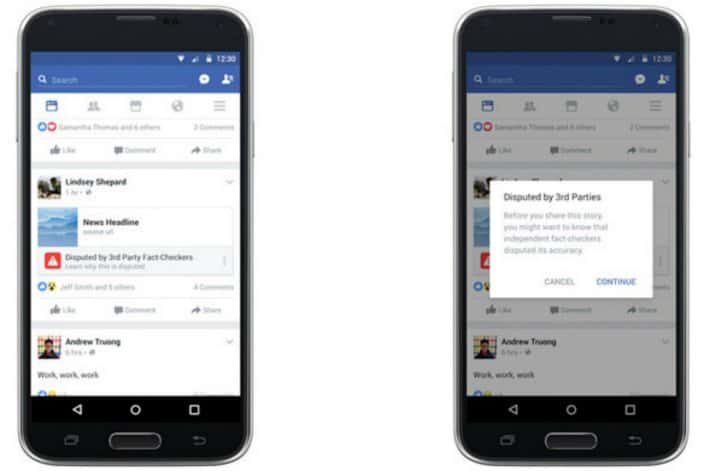 After a lash of criticism following his comments denying that Facebook played a role in the election, Facebook will now start fact-checking and burying fake news in its news feed following an announcement made by the company on Thursday.

The social media platform has teamed up with media organizations that are part of an international fact-checking network led by Poynter, a nonprofit school for journalism in St. Petersburg, Florida.

In a statement, Mark Zuckerberg explained,

We’re making it easier to report hoaxes, and if many people report a story, then we’ll send it to third-party fact checking organizations. If the fact checkers agree a story is a hoax, you’ll see a flag on the story saying it has been disputed, and that story may be less likely to show up in News Feed. You’ll still be able to read and share the story, but you’ll now have more information about whether fact checkers believe it’s accurate. No one will be able to make a disputed story into an ad or promote it on our platform.

A team of researchers will also be charged with vetting fake news sites or misleading domains. This is a collaborative effort in partnership with other media organizations including Snopes, ABC News, Associated Press and Factcheck.org. These partners will have access to a tool allowing them to label news as fake.

A profile by The Washington Post revealed that owners of fake news sites can make thousands of dollars by writing content that spreads fear, solicits emotional reaction and is otherwise not true simply through internet ads.

Last month, Mark Zuckerberg said it was “pretty crazy” to suggest that the prevalence of these sites on Facebook sites influenced the outcome of the election in any way. Since then and with the formation of the fact-checking task force, Facebook is once again innovating. This time in how social media platforms—which are otherwise open-technology platforms—can “build a space where people can be informed.”

That is, with news stories that are true.

Dylann Roof Found Guilty on All Charges in Charleston Massacre