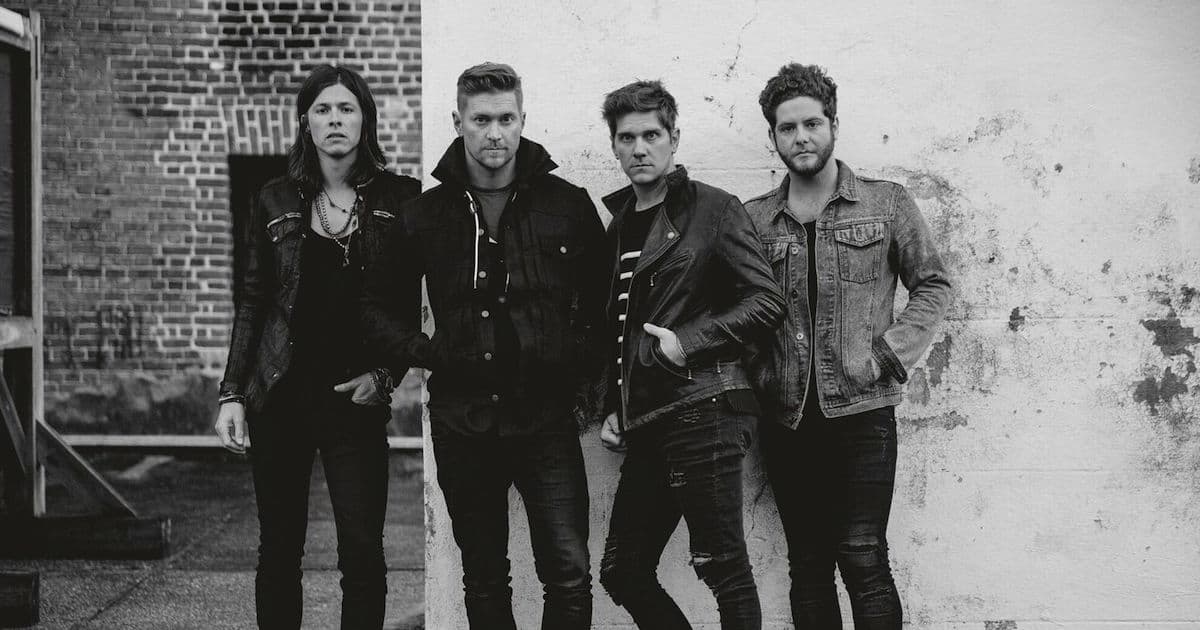 Today, the Grammy-nominated band NEEDTOBREATHE officially releases their sixth album, H A R D L O V E. And it offers a whole new sound from one of the most popular Christian bands of the past decade.

You’ll hear a new sound, in part, because this project came from a different, darker place than NEEDTOBREATHE’s previous albums. We recently talked with frontman Bear Rinehart about the season that shaped band’s new project.

This new album, H A R D L O V E, has a very distinctive sound. When you guys went into the studio, was that a conscious decision or did you guys go in with a clean slate and just let it happen?

I think it was a little bit of both. There was definitely a natural reaction to the last record. It was pretty laid back, acoustic, very straightforward. We had all live-takes in the room. That’s just what we wanted to do. We were going through a dark time when we made that record and that’s what we were capable of. This record didn’t have that feel at all. The first demos we did were all sort of synth-based and beat-driven—which is a really new direction for us.

I can’t explain why besides the stuff that we were listening to. But then once we got a couple demos together we realized, ‘Hey this is gonna be an angle to what we’re doing. How do we make this early ‘70s soul stuff?’ The stuff that I feel like my voice fits the best on with modern elements. We weren’t scared to put some program drums on there or some sort of synth or weird patches.

You’ve said before that your previous album came from a dark place. Can you point back to one event that led you out of that dark period?

My brother and I got in a huge fight that ended up with me in the hospital. So we took a bunch of time off and really thought we were going to break up. The only reason we didn’t is we didn’t speak to each other for a long time.

Both of us wrote out manifestos saying if we’re going to do this, then this is the way we have to do it: We’ve got to put family in front of the band and appreciate what we get to do and do it for reasons that we started with—we love music and feel like we’ve got something to say.

And that really just changed everything.

I know sometimes in those moments we make personal resolutions, but then we’ll struggle to stick to them. Have you found you guys have stuck to it?

I think so. I wouldn’t say it’s necessarily easy all the time. But I do think that we all have a pretty fresh memory of where we were headed and what was making us sort of miserable in that time. I think none of us have any desire to go back to that place so that helps a lot. And just putting as many people in place who believe that.

I think one thing that we tried to do was empower the people around us to challenge us. Back in the day, if me and Bo got into a fight everybody would bail in the room and let us brawl it out. But now we decided to give everybody the power to say, ‘Hey, you might get mad at us in the moment, but you can’t do that.’

Stand up for the guy who’s getting beaten up on. That really changes the dynamic I think.

Do you think that lent itself to this new turn in your creativity?

There’s no question. We feel like we’re in a totally different place as a band and I feel like this record you could put this on at a party and it wouldn’t bring the vibe down. It’s not necessarily what we set out to do but when I listened back to it, I’m like, ‘Man, this is a fun record. You could dance to it if you wanted.’

I don’t know if we looked to try to do that, but it’s just where we were as people. If you have the same subject matter when you’re going through a dark time, you just change the meaning of it. If somebody says write a song about a bird; when it’s dark the bird is dying or its wings are clipped. But when you’re going through a great time—like I feel like the band is right now—you think about the bird flying, you think about freedom, all these positive things. I think even when we were writing about something that was heavy it came out sort of inspirational on this record which I think says a lot about where we are.

You guys are heading out on tour soon. It seems like it’s going to be a different experience with this album.

We’ve spent a ton of time so far working on this new tour. It’s the most fun when you just put a record out and you get to go tour. We tear the songs apart and rebuild them and do a lot of the stuff differently live. We’re going to have some different musicianship on stage than we normally have to help us represent these songs. And I think it’s going to be a show that’s sort of modeled after the way that the record sounds.

It’s gonna be a little bit more modern, a little bit more soulful and smokey sounding. We’ve got a bunch of ideas: The covers and stuff like that we do as little outros to songs will change and be more in line with the record. I think we just got our feet wet on tour last time and realized how big those venues really are and what it’s like to play them, so we got a ton of ideas on how to make it even crazier.

Non-Religious Are Now the Biggest Voting Bloc in America