While it may seem counterintuitive, there probably isn’t a film genre (excluding movies produced by Kirk Cameron, anyway) that more consistently or explicitly references Christian ideas and iconography than the horror genre.

Between The Exorcist, The Conjuring, The Exorcism of Emily Rose, Rosemary’s Baby, The Omen, Signs, Thirst, and The Wicker Man (to name just a few), it would seem that the grimmest and goriest of genres is also often the one most inspired by Christianity.

The academic take on that phenomenon might be that the horror genre is simply appropriating an aesthetic of mysticism from Christianity, or referencing Christianity in order to subvert it. The cynical take might be that chafing Christian sensibilities or homing in on Christian fears is an easy and marketable way to be provocative. But is there a legitimate Christian take on horror?

But despite the prevalence of Christian themes and motifs in horror movies—and even despite the presence of horror filmmakers like Scott Derrickson who are professed Christians—many Christians have been wary of the genre, whether because they actually assume its origins to be demonic or because they interpret Scripture as condemning all disturbing content. What’s worth pointing out, though, is that Scripture itself is full of disturbing content, and that it uses such content to instruct and illuminate.

In a similar way, good horror movies don’t just exploit our fears; they show us glimpses of truth through our fears. What’s more, even horror movies that don’t directly draw on Christianity can offer unique insights into godly existence that Christians might not find in other genres.

Here are a few reasons Christians don’t have to be afraid of the horror movie genre.

Horror Affirms the Importance of Morality

Others have pointed out how horror, more than any other genre, deals explicitly with issues of good and evil. But even more than that, absolutely no other film genre is premised on the conviction that there is such a thing as absolute morality.

After all, what would there be to find horrifying if you could not definitively say that anything was bad or wrong? There is no such thing as horror—true horror—in a morally relative universe.

By trusting us to recoil from enactments of violence, depravity and violation, the horror genre reminds us in a visceral way that we exist in a world of responsibility and consequences, of rightness and wrongness. And this is true across cultures, from Japanese squirmers like Audition to French films like Inside.

Horror Shows Us the Consequences of Putting Our Faith in Science or in Man, Instead of in God

No genre deals with both science and the supernatural as frequently or as directly as the horror genre. By illustrating the dangers of both, horror allows us to see the folly of relying only on ourselves for our salvation.

For example, the mad scientist has been a recurring trope in horror movies since the very beginning, and movies that feature mad scientists—movies like Frankenstein, Island of Lost Souls and The Fly—can provide a powerful critique of science when it becomes divorced from morality. “Mad scientist” narratives can also show us the dangers of giving in to self-idolatry and attempting to supplant God in matters of life and death, creation and destruction.

Other horror films, like The Exorcist, come at this point from a different angle, demonstrating that purely scientific means are not adequate to explain spiritual events. A movie like The Exorcist—as controversial as it is—also shows that, contrary to the mad scientist characters who try to seize power from God, God in fact manages to work His will through very flawed, human servants. Through the extraordinary actions of ordinary individuals, the film acknowledges self-sacrifice as a kind of supernatural event, one that points to the ultimate salvation in Christ.

Horror Reminds Us of Our Fallenness

It can be tempting for Christians to dwell on the fact that we are saved through Christ without recognizing why it is we needed saving in the first place.

But the joy and relief of salvation can only be fully appreciated after we have grasped the horror of human sin. Horror movies—whether they feature ghosts with unfinished business or serial killers with a literal ax to grind—challenge us to confront sin in all its ugliness. Having the chance to remember our fallen natures can remind us to be grateful for Christ’s sacrifice and to call out to Him for redemption from our own sins.

None of this is to say that readers should go right out and sit through the most hard-core horror movie they can find. And of course, not all horror movies are created equal. There’s a big difference between a movie that preys on fear for its own ends and a movie that uses fear to get at something deeper, and Christians have a special responsibility to be discerning of that difference.

But all horror films don’t have to be dismissed out of hand. We can submit them to the same kinds of scrutiny that we do for any other genre.

Victoria Le Sweatman is a lapsed atheist, unexpected Christian, wife and poet. She blogs about culture and politics at two-things-blog.blogspot.com. 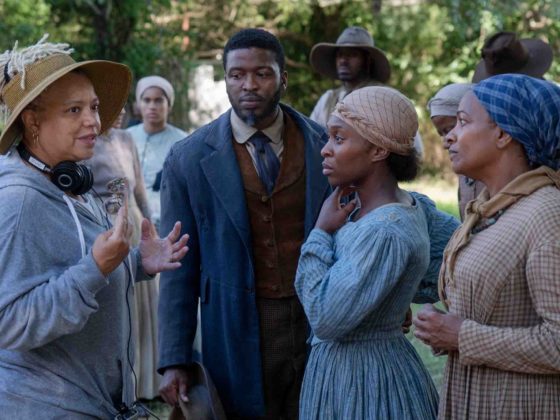