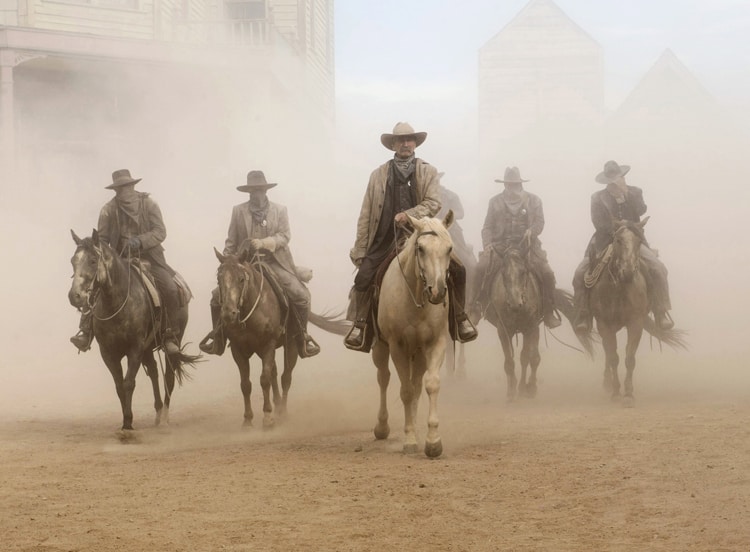 There’s a permeating idea within many Evangelical circles that Hollywood is anti-Christian. I suppose there’s a case to be made there, but on the other hand, throw a rock into popular culture in the modern era, and you’re bound to find references to Jesus, faith and the Bible. From consistent Biblical imagery (and actual Bible verses) in The Walking Dead to the mess of Mother! (director Daren Aronofsky’s ill-fated attempt to tell the story of Genesis to Revelation through a series of uninvited house guests), Christianity plays a role in the stories that drive our culture. If the entertainment industry truly hates faith, they have an odd way of showing it. And if you think 2017 was a fluke, just check out a list of upcoming projects, including Jon Hamm playing the archangel Gabriel for an upcoming TV pilot.

Go ahead and file Godless, the latest acclaimed original from Netflix, in the category of “projects influenced by the Bible.” Boasting both an all-star cast (including Michelle Dockery of Downtown Abbey fame and the legendary Jeff Bridges), the seven episode “limited series” explores religion and belief through the chaos of life during in the New Mexico Territory during the old western period.

If you tend to avoid westerns due to overly-worn storylines and tired tropes, Godless may still suck you in. Set in the town of La Belle, the village is populated almost exclusively by women. Three elderly gentlemen, a sheriff and a teenage deputy reside within the city limits; but the rest of the men died in a horrific mining accident. Some of the new widows had nowhere else to go, and some were just too tough to pack up and abandon the lives they had built. Given the instability of frontier life and the high death toll, it’s not a completely implausible scenario.

Some projects that take a stab at “diversity” can fall back on stereotypes, and often do more damage than if they’d just stuck to a homogenous cast. For example, Michelle Rodriquez’s character in the testosterone-fueled Fast & Furious series doesn’t have any different attitudes or viewpoints than her gearhead male counterparts: she is essentially Vin Diesel with long hair.

Fortunately, Godless doesn’t play out like a version of The Magnificent Seven with female cast members standing in for men. In particular, Michelle Dockery shines here in her best performance since the PBS mega-hit Downton Abbey. Twice widowed by her mid-twenties, Dockery’s Alice Fletcher balances running a ranch with nurturing an atypical family unit, which includes her tween son and the mother of her late husband.

Each woman in La Belle deals with grief and loss in a different way. A former prostitute becomes a schoolteacher. One widow drops her married surname, starts wearing her late husband’s clothes and enters a same-sex relationship, all while developing a reputation as one of the most feared guns in the region. Everyone who steps onto the screen feels like a fully fleshed out character, not just a cheap rendition of something you’ve seen in a western or action movie in the past. This is likely due to the guiding hand of Steven Soderbergh, the director behind the Oceans 11 series and Traffic, who has a proven track record of putting unforgettable characters on your screen.

THE DARK SIDE OF RELIGION

The plot of Godless is carried along by Frank Griffin (Jeff Daniels), a notorious and bloodthirsty gangster who leads a posse that once wiped out an entire frontier town as an act of vengeance. When Roy Goode (Jack O’Connel, who you may remember from the WWII epic Unbroken) interrupts a robbery and takes off with Griffin’s recently pilfered cash, Griffin will ride the entire New Mexico territory in search of retribution.

It’s through Griffin’s eyes that the audience learns of one of the darkest religious chapters of American history. In 1857, a group of Mormon militia attacked a wagon train bound for California, killing more than 140 men, women and children. The worst of the butchery happened after the surviving settlers waved a white flag of surrender, and then were executed at close range after the false truce. Only 17 children under the age of 8, which is the Mormon age of innocence, were spared and taken in by Mormon families. The attackers blamed the carnage on the local Paiute Indian tribe. While Frank Griffin may be a fictional character, the depiction of the Mountain Meadows Massacre is all too real.

Godless is, in many ways, the story of Frank Griffin’s conflicting hatred of God and cruelty, and his desperate attempt to discover divine love and redemption. He is both the victim and the perpetrator of injustice, both causing pain and seeking healing.

Alone, Griffin may paint a grim picture of faith and belief, but he’s surrounded by a cast that are all searching for redemption in some way. Godless is a story of humankind’s predisposition towards cruelty and chaos, and also of the ability for common people to find compassion, friendship and faith in the most difficult of circumstances. It’s a show that deals with mass murder, rape (warning, there are brief flashes of nudity and disturbing scenes) and epidemic disease without spiraling into hopelessness.

Peppered heavily throughout the series are many references to God, faith, belief and prayer. The definitive worldview of Godless may be a bit hard to nail down, but this is one show that doesn’t actually live up to its name. God and the Bible are playing big roles in this excellent Netflix original.