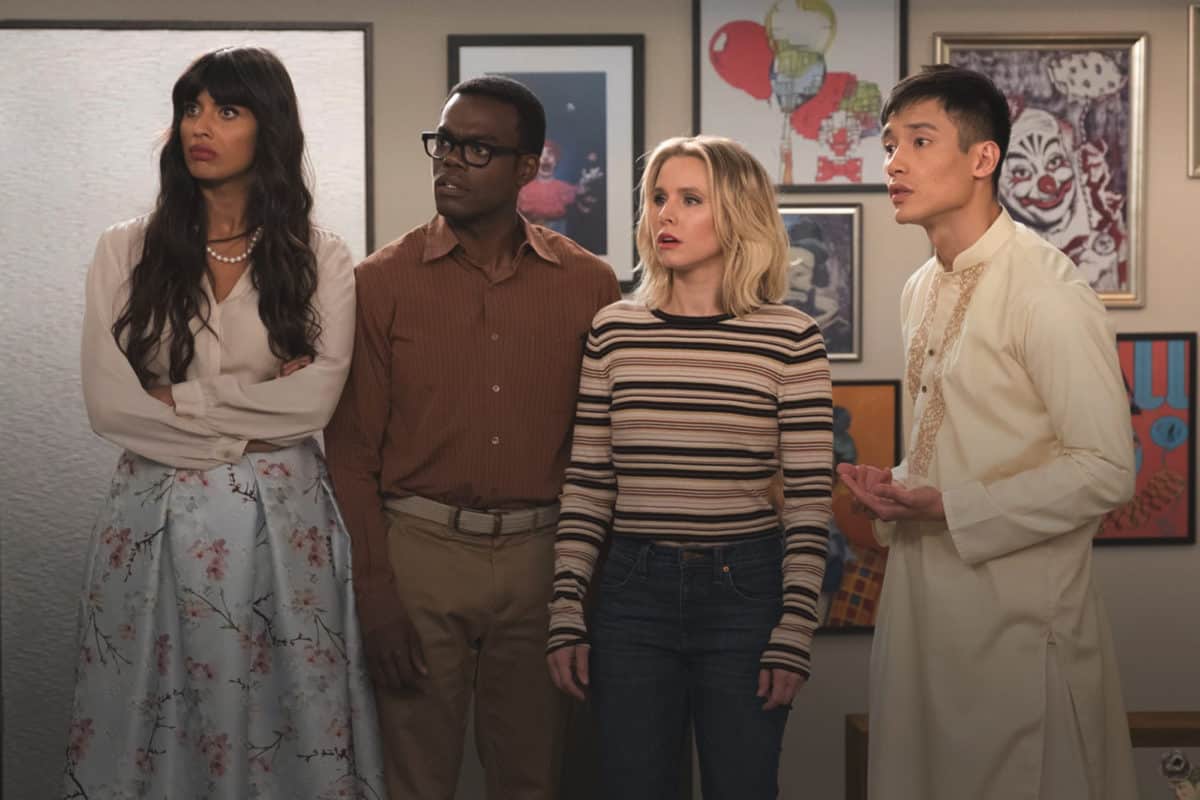 We thought we had it. The Good Place won over a niche audience with witty wordplay, found national attention with a clever twist, and achieved mainstream popularity with a second season that sprinkled rich philosophical crumbles atop its comedic frozen yogurt. It’s so easy to love this show, but after last night’s unexpected and delightful second-season finale, we have to learn to love it, and watch it, in a different way.

The mission of The Good Place was always, in our minds, the Good Place. As soon as we realized Eleanor and Chidi and Tahani and Jason weren’t in heaven, the show became oriented toward salvation. The key to the Good Place, of course, was for our band of endearing scumbags to learn how to be “good,” and in that redemption, they’d end up on the positive side of the afterlife. Through that redemptive process, the show was able to explore real moral questions: What makes a good person? What makes a bad person? Can a bad person become good? The triumph of The Good Place was how, despite wrestling with these complex concepts, it maintained the fun week after week.

Watching the show became a journey toward the Good Place for the viewer, too. One of the delights of the first season (until the final reveal) was taking in the bright, pastel vibes of The Good Place’s charm-your-socks-off interpretation of heaven, with its soulmates and dream homes and froyo that tasted like “unexpected hotel upgrade.” We loved being in the Good Place, and that vibe was only matched by the second season’s foray into the Bad Place, where the minor inconveniences were tuned to a spot-on level of aggravation.

These Good Place and Bad Place moments created a delightful feedback system that, with every mention of “waiters who make the ‘I guess you hated it’ joke” or “Transformers-scented Axe body spray” delivered satisfying pings of a “that’s so true!” feeling. This is when The Good Place was at its funniest, and it made the season-two finale, when our characters were on the brink of passing their goodness test and making it to the Good Place, feel exciting. The show had other plans.

Eleanor and Chidi and Tahani and Jason failed their entrance exam into the Good Place, even with the help of demon-turned-savior Michael (it should be said, over and over until the end of time, that Ted Danson is amazing on this show). Our heroes, and the audience, was denied the Good Place, but that wasn’t the end. There was another way.

With the umpteenth snap of his fingers, Michael sends our heroes back to their dying moments, saving each of them (we assume, we don’t see Tahani and Jason) and offering another opportunity into the Good Place. It’s an exhilarating turn, but beneath the narrative curveball lies the show’s real mission statement. Our characters have another lesson to learn, but the real twist is that the lesson is as much for us, the viewers, too.

In her second chance, Eleanor’s near-death experience (Michael pushed her out of the path of those deadly shopping carts) compels her to live her life toward a purpose, but after a stretch of honesty and fortitude and generosity, the goodness begins to have consequences. Her job as an environmental activist costs her some money, and her steady boundaries alienate her friends. In short, Eleanor’s “goodness” doesn’t give her happiness, and she spirals back down to her Bad Place lifestyle. Enter the best Ted Danson moment of the show to date.

Eleanor winds up at a bar. After a drunken rant about her futile attempts to be good, the camera cuts to show the bartender himself—it’s Danson’s character, Michael (seeing Ted Danson polishing a glass and cutting lemons again is spine-tingling in the best way). Michael listens to Eleanor’s plight and when she asks him, on her way out, “What do I owe you?” he says, “The real question is, ‘What do we owe each other?’”

That’s been the central question of The Good Place this whole time. The world of the show coaxed us to believe goodness and happiness are parallel lines, but the finale denies that entire concept. Goodness won’t guarantee us happiness, but it does compel us toward purpose, sacrifice, and truthful relationships—what some would call the meaning of life. The Good Place is careful to remain secular, but it operates on a spiritual idea: Something implicit in our nature compels us to serve others, even when serving others is painful.

For almost two full seasons, the main characters were striving to make it to the Good Place, but their strivings were rooted in a legalism that kept them in a self-centered mode of thinking: This journey toward goodness is about me and my reward. What the finale tells us, with striking wisdom, is that the Good Place should never have been the goal for the characters. Instead, this was just about goodness, no matter the cost.

And that goes for us, too, as fans of the show. What the finale teaches us is that watching this show should be rooted in the characters, not the world. We were on our way toward that approach—the GQ photo shoots and Blake Bortles memes prove it—but this episode forces us once and for all to orient ourselves away from the Good Place (or Bad Place) as the end-all, be-all.

The point here is Eleanor, Chidi, Tahani, Jason, Michael, and Janet. It doesn’t matter if they make it to the Good Place; it just matters they continue to pursue one another. As viewers, we’re now being asked to join that pursuit. The Good Place has rebooted all over again, but on this show, the opportunities created by starting over extend to the audience. We grow at the same pace as the characters, and that makes for a delicious-tasting bowl of yogurt.