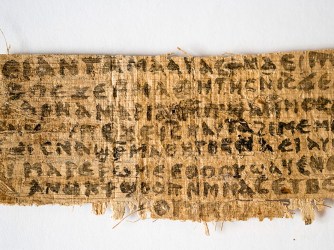 In 2012, Karen L. King, a divinity professor at Harvard University, shared details of a piece Egyptian papyrus that she believed confirmed the fact that Jesus had a wife. Now, she is saying that with new information, she believes the scrap to be a “modern forgery.”

The papyrus scrap, which is only the size of a business card according to History, read “Jesus said to them, ‘My wife,’ followed by ‘she is able to be my disciple’ on the next line.”

At the time, King maintained that it shouldn’t be taken as evidence that Jesus had married.

King’s finding was, obviously, immediately controversial. The papyrus was carbon dated and put through other science tests in an attempt to determine if it was a forgery. After the tests seemingly confirmed its age and authenticity, the Harvard Theological Review published an article about it in 2014.

Ariel Sabar wrote an article in the July/August issue of The Atlantic debunking the validity of what King called “The Gospel of Jesus’s Wife.”

Long story short: He traced the sample back through its chain of ownership to a Florida man named Walter Fritz, who admitted to having purchased the artifact and other things from a business partner. The letter of authenticity also looked fake. Fritz admitted that he was the original owner, but denied forging it himself.

King admitted that she hadn’t done much investigation into the piece and now says the evidence “tips the balance toward forgery.”

6 Other Bible Movies that Need Sequels

Why Does Prayer Sometimes Feel So Boring?