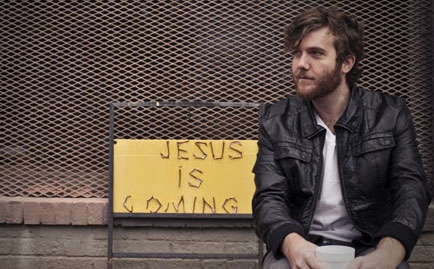 During the last several years, John Mark McMillan has learned to stop worrying about whether or not his lyrics are perfect, or if what he sings about is what people want to hear. After all, a lack of approval is a common side effect of honesty.

“I want to inspire people to say what they feel and not what they feel like they’re supposed to say,” he says of his songs. “Because if they feel like they’re supposed to do something, they don’t give themselves the opportunity to be genuine. They’ll just say the same words, which are great words, but after a while they stop meaning anything. We need new words to say the same thing because after a while the words lose their potency.”

McMillan is perhaps best known for his song “How He Loves,” which, despite being released independently five years ago, has found its way to the ears of some of the industry’s biggest names—and into churches across the country.

Originally appearing on his debut album, The Song Inside the Sounds of Breaking Down, “How He Loves” has been covered by David Crowder Band, Kim Walker and the Glorious Unseen in the studio, and Flyleaf, Hillsong and Todd Agnew in concert.

“I’m super happy for a whole new generation to take the song as their own and use it for their personal conversation with God,” McMillan says. “We’d actually stopped playing the song for a while, but it feels like it has a new energy now as new people discover it and that’s exciting to me.”

For McMillan, the song’s raw emotion is personal. It was written after a friend, Stephen Coffey, died in a car accident—the night after Coffey told God he would give his life if it would draw more youth to Christ.

“He was my best friend,” McMillan says. “I’d known him since we were children. We were baptized together. Really, what it came down to is I was angry with God. I didn’t quite know what to do with those feelings, but through that anger and resentment, I was able to see the heart of God in it all. God was able to take something terrible and show me something through it.”

Shortly after the tragedy, McMillan sat down to put his feelings into song and the lyrics quickly began flowing onto the paper.

He describes the writing process as a conversation with God: “I sat down to have a dialogue with God and, really, He ended up having a dialogue with me. It’s like He was speaking to me through the song.”

McMillan adds that the Church should incorporate more songs dealing with tragedy, loss and despair into its worship. He points to one of his favorites—Bruce Springsteen—as an example of someone who sings about hope to those who don’t have it.

“That’s what I love about Springsteen—he’s telling the average person’s story,” he says. “That’s what a worship leader should do.

“On this side of eternity, we’re going to have tragedy,” McMillan continues. “A lot of times in church we don’t want to talk about those kinds of things because it’s uncomfortable, but there are so many people in church who need to have that dialogue with God that I had. I think that’s why that song has become so powerful.”

In addition to reclaiming “How He Loves,” McMillan says resurrection was the theme that kept coming to the surface as he wrote The Medicine.

“It takes it from the resurrection of Jesus to the idea of living in the Resurrection, which we’re called to do on a daily basis,” he says. “Having a relationship with Jesus creates life in your daily life.”

And Medicine is regularly marked with refrains pointing to that sense of new life. “Death in His Grave” explores the conquering power of the Resurrection. “Reckoning Day” anticipates a time when we are no longer ruled by death. The album’s soaring lead single, “Skeleton Bones,” draws on Ezekiel 37’s vision of The Valley of Dry Bones, where God creates a vast army from the remains of the dead.

“I kind of see that as the Church,” says McMillan—and as someone who has been around church his whole life—he learned guitar from worship musicians at his father’s storefront church—he should know.

“The Bible talks about the Church being a body and humanity as kind of the dead bones,” he continues. “That’s basically the idea behind the song—that we come together and we become something more than ourselves. It’s a resurrection song.”

In the end, McMillan says, having the right words isn’t the point—it’s being able to be vulnerable and open yourself to God.

“I think people get so concerned with being correct that they end up editing themselves down, but that’s not the way King David did it,” he says. “That’s not the way they do it in the Bible. You bring God what you have and let Him deal with you. I really feel like God is not interested with how correct our words are. He doesn’t want us to get into weird situations, but I think He’d really prefer something that’s incorrect and genuine instead of something that’s correct but comes from a robot.”

When it comes to leading worship, McMillan says the goal must be to help people communicate on a personal level.

McMillan also believes in seeking social justice as an act of worship. He contributed the joyous “I Dreamed There Was a Fountain” to a benefit album of the same name to support Zao, an organization providing safe drinking water and education to developing countries.

“Literally, they’re preventing wars by digging wells for people,” he says. “I thought, ‘Man, that’s the real kingdom of God.’ Doing stuff that in reality is saving people’s lives. It’s literally changing the whole world for some people. One well gives life to a thousand people.”

In a February 2010 entry on his blog, The Promenade, McMillan wrote: “It’s time to write dangerous music. It’s time to take risks. It’s time to wear your heart on your sleeve, and sing about the things that actually matter to you. It’s time to bury the shackles of religious expectation and stop trying to put new clothes on the dead.”

The sentiment is what ran through McMillan’s heart as he made The Medicine, and it’s his general philosophy as a worship songwriter.

“Jesus was not safe, at all,” McMillan says. “I’ve been in church my whole life and I’ve been a Christian a long time and I’ve always had a difficult time connecting with the expression of the Church. That’s really why I started writing music, I think, because I needed to be able to say those kinds of things.”

After all, he says, the Book of Isaiah reminds us that all of our righteousness is like filthy rags. What God wants is a person’s whole heart—“the whole nasty thing,” McMillan says.

“How silly would it be to say, ‘OK, Jesus died so we could sing Him songs,’” McMillan says. “I think He died for us because He wanted a relationship with people, and the music is a part of that relationship. If you get the music away from that, it’s just music.”