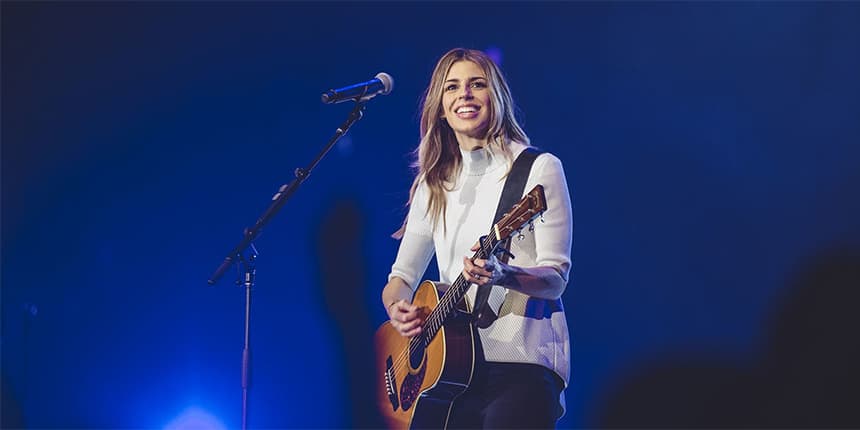 When the pandemic hit, Brooke Ligertwood was in California preparing for Hillsong Worship’s enormous Awake tour in promotion of 2019’s excellent worship album. But that plan, like almost every 2020 plan, was put on hold. As it’s become clearer that the old normal is gone for good, Ligertwood has adjusted. She’s got a children’s book in the works for later this year and just released a new version of “Awake My Soul” with her friend Tasha Cobbs Leonard. We talked to her about how she’s rolled with the punches in quarantine, why she felt like it was important to work with Leonard and when it means to have authority in worship.

The pandemic feels like a huge disruptor. Everybody’s felt a delay on something important to them. Same for you, I’m assuming?

Yeah, definitely. We had planned a big Awake headline tour in May, which we were really excited about. That got postponed to August, and then just a few days ago we learned we’re having to postpone that again But we’re pretty gritty people. We’re not canceling it. We’re like, “We’re just postponing it.”

We’re holding onto hope. Hopefully, early next year, if it’s safe and responsible. Obviously our first consideration is people’s health, but I don’t think people realize, obviously at Hillsong, we’re an Australian church, a movement birthed out of Australia. Most of our team is in Australia, but the international borders are closed. So a huge reason for that is that our team literally, they all had to leave the country.

So you’re on Zoom a lot.

Zoom fatigue is real. I think our team has pivoted. I feel like pivoting is a good word for 2020. They’ve done amazing at pivoting and changing and adapting and growing and learning the new realities. But at the same time, I think it also makes you really treasure that connection. I haven’t lived in Australia for a long time now, but it’s never really affected me too much because I go back at least three times a year for our conferences, for other things, and this is the first time that I’m really like, “Oh, I actually, I don’t know the next time I’m going back,” and seeing my people.

That’s alerted me to what I took for granted and how often I was able to see my close friends who live on the other side of the world. But in terms of the church, I think the church has done amazing. We’ve really adapted, as have most churches that I know, in terms of figuring out how to build community online. It’s no small feat, but I think it was probably time for that to happen.

Tell me about  “Awake My Soul” that you did with Tasha Cobbs Leonard. How did that come together?

The song is from our record Awake that came out at the end of last year, and then also last year we announced for our Hillsong Conference this year in July. Tasha Cobbs Leonard was one of those guests. I first came under the sound of her authority at a night that a bunch of us did in Houston just after Hurricane Harvey. A bunch of us got together and Lakewood was kind enough to offer us their venue to use. We just wanted to just minister to people who were hurting.

I remember Tasha was opening up the night. I had never heard her before, and I walked into the room and I was like, “What is going on?” She was just insane. The power and the authority and the anointing that she had was extraordinarily clear and active in the room.

Over the course of the next few years, we found ourselves at a lot of the same things and became friends. I was really excited when she was coming to Conference and I reached out to her and said, “If you’re coming all this way down to Australia, what do you think about if Hillsong Worship and you, maybe we can record a song together at Conference?” She was into that idea and we were progressing toward that, and then, of course, the pandemic happened. The conference got postponed to next year.

But really this is something that’s been planned for a long time and it’s really evident to me that God knew the timing of this collaboration. For Hillsong Worship, it’s been the first time we’ve collaborated with another artist since Delirious in 2004. It’s really powerful. I hope that it can bring some relief, some comfort, some breakthrough to people at this time.

When you say you felt Tasha’s authority, what do you mean by that? What’s the sense you get when you hear someone singing with anointing?

With a song, I can communicate to your heart in three to four minutes what I perhaps never could in a 45-minute message or a two-hour lecture. Music bypasses the mind to be able to reach into something within the depths of us. So you have a gift. Then you have the medium, music. But then there’s something else which you experience now and again, and it’s somebody who is anointed. Anointing is that otherness that you can’t learn. You can’t be trained to be anointed. You can’t earn your way towards anointing. There’s no degree. It’s something God bestows.

But when those things align, when there’s the excellence of the gift, when there’s the power of the music, but then where there is the undeniable divine anointing, which you can’t explain, you can’t put it into words. It’s an otherness. It’s something that God gives that just has the ability to slice through a heavy and thick atmosphere with the presence and the power of God. That’s what anointing is.

I’ve been really interested in the process of writing worship music lately. It seems like such an intimate experience that then gets shared all over the world, to be sung by millions of people.

I look at the writers in our world and they work really, really hard. That hard work can’t be underestimated. It’s pleasing to God when we’re willing to be really diligent with serving and stewardship. We don’t take for granted the grace of God. I think we don’t expect everything to have to come easy, but we are willing to really, really work. At the same time, there’s the otherness that I mentioned just before. God takes our work and breathes something into them that we’re not clever enough to accomplish. It’s this really beautiful partnership with God when it comes to writing for the Church. That’s a really holy thing. There is this element of submission and sacrifice to it, which is so beautiful. I’m no longer writing something to simply communicate my thoughts and feelings about something.

I’m writing to try and serve the mechanic who works overtime to pay his mortgage or the doctor who’s worked four double shifts and comes into church exhausted, or the single mom who is at her wit’s end. I write songs to serve them. I’m not trying to communicate my point of view. What I’m trying to do is articulate what we know of God from scripture, and put that in a song that might become a prayer that they didn’t know how to pray, that they needed to pray, that connects them with God. It’s a great responsibility and a really beautiful, beautiful service that I never, ever take for granted.

And you’ve got a kid’s book coming out, right? What a Beautiful Name.

It’s a children’s book, my husband’s Scotty has illustrated and it’s based on What A Beautiful Name, the song. Ben Fielding and his wife, Karalee, and myself and Scotty wrote the story. It’s an adventure book. It’s a story about a little kid who goes on a journey and discovers the beauty and the wonder and the power of the name of Jesus. It comes out on September the 15th. It’s pretty cute.

Check out “Awake My Soul” here.

Don’t Get Sidetracked by the White Jesus Statue Debate

Colorado Will Re-Examine the Case of Elijah McClain, Who Died in Police Custody