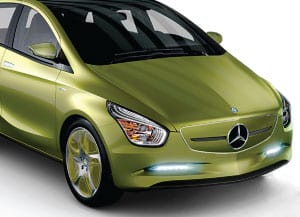 Remember the days before the Chevy Volt was ever a twinkle in GM’s eye, before gas prices were so high that everyone wanted a new way to drive? Back then, everyone believed the next great innovation in alternative fuel for cars was hydrogen. That assumption has taken a hit in recent years, as battery-powered and plugin electric cars have become all the rage. But some auto-makers are sticking with hydrogen. And they recently got a big boost.

Shell (yeah, the same company that runs gas stations) has opened the very first public hydrogen filling station in Southern California that gets its hydrogen from pipelines rather than trucks. That’s a bigdeal because part of the current argument against hydrogen cars is there is currently no infrastructure to provide fuel for the cars. With a pipeline system a reality, it will become increasingly possible to make hydrogen cars for the mass market. Which is exactly why Mercedes-Benz, Honda and Toyota all plan to have cars available for public purchase starting in 2015. They expect to make the cars available for around $50,000—which is a lot, but much lower than the current six- or seven-figure price tag currently sported by the cars.

Documenting the Decline of Girls in India