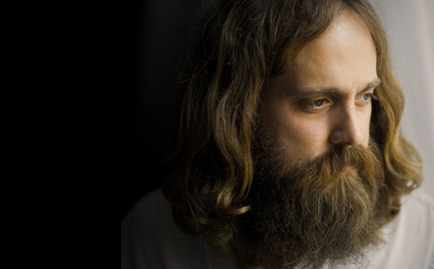 When a well-known global company selects your song to feature in one of their commercials, you know you’ve hit a whole new level of success. Sam Beam had met with enviable critical acclaim over the years for his smattering of albums and singles, but it was a popular M&M ad, which featured his cover of The Postal Service’s "Such Great Heights," that helped propel him into the indie-icon status he enjoys today.

"It still is surreal that they would ask me," Beam says. "Even going and playing shows where people show up is surreal. I started doing this as a hobby in my spare time, and now it’s turned into something else. Yeah, it’s totally surreal."

Less than 10 years ago, Beam was enjoying his life as a film professor in South Florida. The hours allowed him to work around his kids’ school schedules, and he was able to dabble in his musical hobbies. Over time he amassed a stockpile of 75 to 100 songs that were all written and recorded from his home. He put demos out under the name Iron & Wine throughout the city of Miami, but it wasn’t until the Sub Pop label heard them that his music found its way off the Florida Coast.

Around this time, there was a shift occurring in the world of music. The garage rock revolution, led most notably by The Strokes and The White Stripes, gave way to a folk-rock revival where Nick Drake was name-dropped as everyone’s major influence, and drum sets and Les Pauls were replaced with banjos, sitars and any acoustic stringed instrument you could softly pluck to your heart’s content.

Sub Pop and Beam composed the 2003 debut album, The Creek Drank the Cradle, from the batch of songs he had created at home. His intimate, homespun songs were the epitome of lo-fi. His vocals were sung ever so gently over the warm, delicate tone of his acoustic guitar, as if Beam thought any noise above a whisper would cause bodily harm to the listener.

Beam’s 2004 follow-up album, Our Endless Numbered Days, dispelled any predictions that the technological advancements of a modern-day studio would ruin his pure, homegrown delivery. Quite the contrary; it amplified his voice and career to a position of national stardom. The success of that album led to the M&M commercial, as well as songs featured in the films In Good Company and Garden State.

Iron & Wine, along with indie-folk contemporaries like Conor Oberst, Devendra Banhart and Joanna Newsom, have all enjoyed mass amounts of critical success and popularity in this period of folk eruption. However, the bubbling of the indie-folk scene is fading to a simmer, and just like every culture trend that evaporates, another trend will quickly fill its place.

However, Beam isn’t likely to be forgotten anytime soon, in part because of his unusual approach to the frequency with which he releases music. Despite the usual pressure from the music industry that considers three years a minimum amount of time between albums in order to prevent oversaturation of an artist in the public eye, Beam has released a mix of EPs and full-length albums, each of which has been a complete musical statement.

The Shepherd’s Dog, serves as Beam’s Blonde on Blonde, an album that takes a newfound repertoire of instruments and creates a record with as many genres and influences as there are songs. His newest album, Kiss Each Other Clean, continues the trend of instrumentation and fully birthed pop songs as opposed to lo-fi bedroom recordings [Editor’s note: check out our review here].

Lyrically, Beam has always used the Bible as a main source for characters in his songs. Jezebel, Sodom and Gomorrah, heaven and hell, God and Satan are just a few who have made appearances in the past. The biblical references were all over Shepherd’s Dog and continue on Kiss Each Other Clean. Clean has lyrics about Lazarus, a “godless brother” and some bizarre end times imagery.

When asked why he so often turns to biblical themes, Beam replies: "Well, for me, I grew up in the Carolinas, and it’s our mythology. Those are the characters that we learn about how to live life and moral lessons. It wasn’t Zeus and Athena. It was Job and Jesus. With Cain and Abel, I like using them because you start a bit further along in the story. You don’t have to worry about back story or information. When you mention Cain and Abel, everyone understands that they represent the duality in the individual. So you get to start a bit further along."

The fact that Beam himself is not a Christian may confuse some, but he’s always had a major awareness of the Bible and has never given much thought to how it affects the way others view him. "I’m interested in it," he explains. "That’s one of the things I understand, the culture. It’s pretty big on the cultural world map. I don’t shy away from [Bible stories] because I’m worried about people thinking I’m a Christian. They’re characters that everyone understands, and it’s a huge part of our culture."

Beam’s ever-growing collection of musical hats fits him extremely well in great part due to his ability to pair original song structures with timeless narratives that immediately draw the listener close. However, his narratives never attempt to reveal the full story. Instead, he allows his audience to complete the story themselves. His intention is that listeners would relate to the themes and characters he introduces and be able to complete their own narrative. It would make sense that Beam’s strong film background would explain his narrative inclinations, but Beam doesn’t quite agree. "I try to treat songs more like poems than screenplays," he says. "I enjoy when you describe more than you explain or you suggest more than you argue. It gives it a rejuvenate entertainment value, where success isn’t dependent on whether you argue your points successfully or not. People can draw their own conclusions and maybe even draw other, different conclusions the next time they listen to it."

The typical artist can see his career come and go with any minor shift in the musical weather vane. There’s a reason artists like Joni Mitchell and Bob Dylan didn’t disappear into the horizon like their peers Joan Baez and Donavan (crowned the "British Bob Dylan" at the time) when the folky 1960s came to an end. Instead, their musical growth has never ended, and neither has their influence. Likewise, there’s no doubt Beam will be making great music long after the guitars, banjos and ganjos (guitar + banjo) are packed away and the rock/neo/indie-folk phase has passed. The evolution of Iron & Wine continues to manifest itself with every release. Thus far, the journey has taken him from a voice, guitar and a living room to a candy spokesman, a mariachi maestro and pretty much everything in between. The one remaining constant has been Sam Beam’s ability to make every change completely worthwhile.

Are Reusable Bags Worse than Plastic?