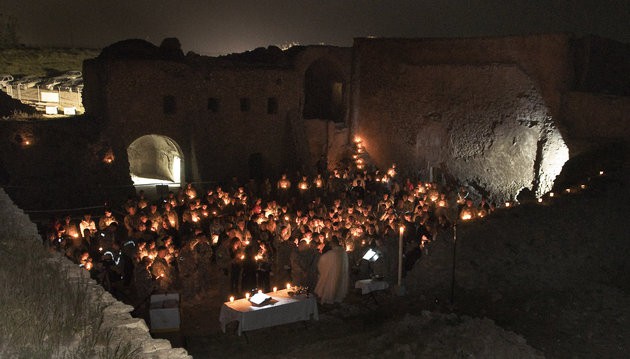 St. Elijah’s Monastery of Mosul, the oldest Christian monastery in Iraq, has been destroyed. The 1,400-year-old structure, which has served recently as a place of worship for U.S. troops, is the latest in a string of ancient cultural sites to meet its end at the hands of Islamic State militants. The Iraqi Reverend Paul Thabit Habib said, “I can’t describe my sadness. Our Christian history in Mosul is being barbarically leveled. We see it as an attempt to expel us from Iraq, eliminating and finishing our existence in this land.”

Satellite images obtained by the Associated Press show the compound absolutely leveled. Upon seeing these images, Suzanne Bott, a U.S. State Department cultural adviser in Iraq, who spent more than two years restoring St. Elijah’s Monastery, teared up. “What we lose is a very tangible reminder of the roots of a religion,” she said.

Army reserve Col. Mary Prophet, who was deployed to Iraq in 2004 and again in 2009, recalled a sunrise service where she served communion to other worshippers: “I let that moment sink in—the candlelight, the first rays of sunshine. We were worshipping in a place where people had been worshipping God for 1,400 years. I would imagine that many people are feeling like, ‘What were the last 10 years for if these guys can go in and destroy everything?'”

Will Ferrell and John C. Reilly Might Reunite for a Comedy About the American-Mexican Border