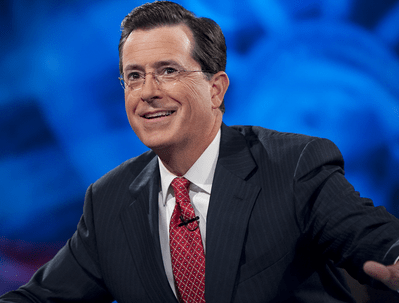 Republican presidential hopeful Jeb Bush will join George Clooney and Kendrick Lamar as guests on first the episode of The Late Show with Stephen Colbert when it debuts on Sept. 8. Colbert has previously said he plans on dropping the ultra-conservative persona he cultivated on years of The Report, so the choice of Bush for an opening night guest seems like an interesting one. Referring to the crowded Republican field, Colbert jokingly tweeted, “My first GOP candidate! Luckily I do 200 shows a year, so I think I can fit them all.” Even Bush got in on the joke, replying, “Only if you have at least two of us on each show.” Colbert’s already attempted to land another, more outspoken GOP candidate. He recently visited Entertainment Tonight, looking directly into the camera, issuing this challenge to Donald Trump: “This is not an invitation, Mr. Trump. This is a dare. I dare you to come on the show.”