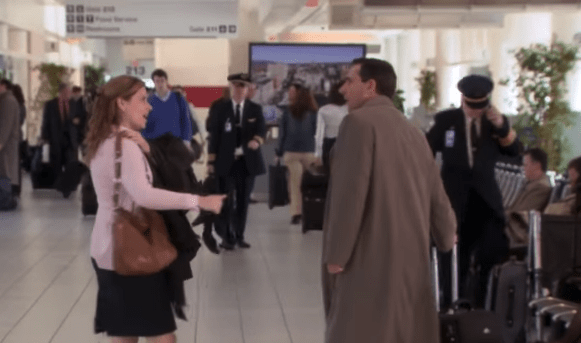 Every Office fan remembers the moving moment during Michael’s goodbye episode when Pam chases down her old boss at the airport and says one last thing to him away from the microphones. It’s really sweet, and we totally cried over it, but one thing we’ve always sort of wondered: What did she say?

Jenna Fischer, the woman who played Pam herself, has the answer.

During an Instagram Live session on Tuesday, Fischer was fielding questions from fans when someone asked about the scene. She doesn’t give a ton of specifics, but she does outline what she said to him:

“That was me talking to Steve,” she said. “I told him all the ways I was going to miss him when he left our show. Those were real tears and a real goodbye. That was a really emotional scene.”

So Fischer essentially broke character for a moment to say her real goodbye to the real Michael, which no doubt made the scene twice as good and effective for all of us at home.

Now, if only we knew what Jim’s note to Pam said. Someone hop on Fischer’s next IG live to find out.

Propaganda on ‘I Am Second’: ‘Be Willing to Risk Name and Reputation for the Sake of Pursuing Love’