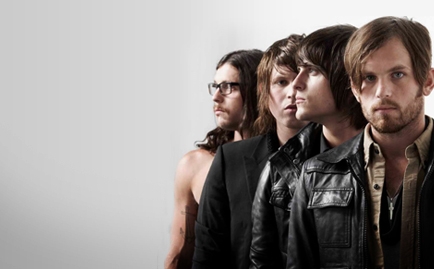 Kings of Leon’s story has captivated people since they came on the scene in 2003. It’s straight out of a Southern Gothic novel: The three Followill brothers (Nathan, Caleb and Jared) grew up traveling the rural South with their father, Leon, a United Pentecostal Church pastor and traveling evangelist, and their mother, Betty Ann, who led worship. Their childhood was characterized by all-night church meetings, healings and the Holy Spirit.

“I think part of [the early publicity] has to do with the way we were raised, the whole good versus evil thing,” Nathan Followill laughs. “We went from being in church every night to being in clubs and bars. I also think the fact that we are all related and where we came from was part of it, too. Luckily for us, the story kept the attention long enough for them to give our music a chance.”

It wasn’t an easy childhood. The brothers were on the road 325 to 330 days each year. There was no place they could call home, and very few friends outside of their family.

“That was my entire childhood,” Followill says. “Except for three and a half to four years where we actually stayed at one church and my dad became a pastor instead of an evangelist. That was our home church and he was the main preacher and that was for about four years. Other than that, we’ve been on the road our entire lives. The main difference is that our tour bus then was a 1987 Olds 98 with no shocks in it. We had hydraulics before hydraulics were cool. But you’re not really setting your roots anywhere when you do that. We’d go to a church and stay for a week and you’d make friends with those kids, but you didn’t want to be too good of friends because you knew that you were leaving in a couple of days and wouldn’t see them again for a year or year and a half.”

Eventually, Leon Followill burned out. He began drinking heavily, resigned from his position and left Betty Ann. It was then that Nathan and Caleb began to pursue music.

Many have wondered how brothers with such a strict upbringing—and such a lack of pop culture influence—could be making the music they are today. “We didn’t even own three CDs,” Followill laughs. “I think my mom had this guy named Leon Patillo and I can remember Russ Taff. Oh, then there’s Shirley Caesar.”

That such a heralded rock band could be so unfamiliar with the legends who’ve gone before them is maybe the most unbelievable part of their story. Their first album, Youth & Young Manhood, seemed such an obvious play off Southern rock acts like the Allman Brothers that it seemed Kings of Leon were playing coy at best, or flat out lying at worst.

Followill admits that when they first started the band, they were sponges—soaking in everything they heard. He says he’s still discovering bands that are amazing, and then he’ll find out they’ve been around for 25 years and he’s never heard of them before.

“I think it’s amazing that we were a band that started just to make music and not to be the next Led Zeppelin or the next U2 or whatever band,” Followill says. “We aren’t one of those bands that we had someone we tried to pattern or model ourselves after. We’re so illiterate as far as music and musical history goes, so that’s helped us a lot to discover music in our own way and the music that comes out of us is truly our music. Early on, we got compared a lot to Lynyrd Skynyrd or Allman Brothers or other like bands, and we couldn’t name any of their songs.”

So how do four boys go from church kids to the rock ‘n’ roll lifestyle—writing songs about being too drunk for sex, transvestites on cocaine … and, of course, fiery sex? Is there any of that old-fashioned upbringing left?

“My mom is religious and I have four aunts that are all married to preachers, so that’s always going to be a part of our lives,” Followill says. “You can’t really get away from that. But I think we realize now looking back on it that the way we were raised definitely shaped us into the guys that we are. There are definitely things from that time of life that I want to keep, especially being a good person and being thankful for everything that you have. Essentially we do want to be good people, but on the other hand we realize that a lot of that was very fear-based to get you to do something as opposed to giving you logical reasons why you should or should not do something.”

In many ways, it’s a familiar story: preacher-kids gone wild, rebelling against a strict upbringing, lashing out at a father who left them and had his own fall from grace. Yet Kings of Leon haven’t thrown the baby out with the proverbial bathwater. As Followill explains, they’re still involved with charitable causes and their daily life consists of prayer and the occasional jaunt to church—at least for mom’s sake.

“We still give money to churches that are in need. We’re still pretty active as far as being charitable. Every now and then, like on Easter Sunday, we will go to church. That’s what [Mom] wanted for her birthday was for us to go to Easter Sunday with her. So we did that and ended up signing more autographs there than we do at a concert, which is kind of funny. We’re definitely thankful people and I say my prayers every night before I go to bed and thank God for the life we’ve been given.”

According to Nathan, the Followills wouldn’t change a thing. Their background, however strange, has led them to this point.

“I don’t think there was any resentment, but I think we did miss out on a lot of good stuff growing up that was so unnecessary,” he concludes. “That’s what sets us off the most. We missed out on so much stuff with our friends because of the religion card. But that’s it. If you ask any of us if we would change the way that we were raised, we would all say no. There would be no Kings of Leon without our upbringing, and it made us all so close because we had to be close. We were always in the backseat of a car together, so that helps us in the sense that we’re a band of brothers who can be in each other’s face 260 or 270 days out of the year on the road. And then when we get home, we still want to hang out with each other. That’s the biggest perk of the way we were raised.”

This article originally appeared in RELEVANT. Kings of Leon’s latest album, Come Around Sundown, is out today.