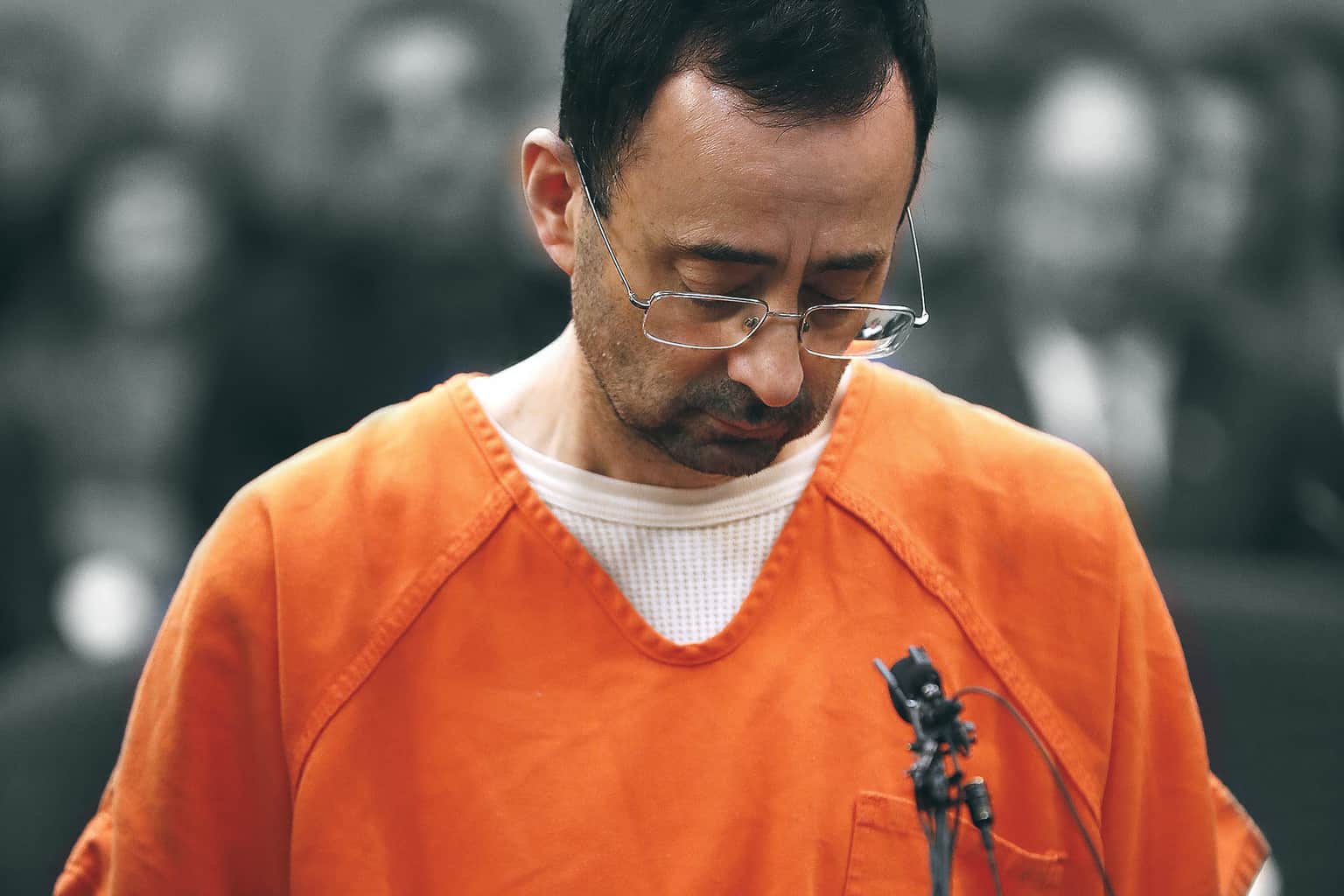 There was no part of the Larry Nassar trial that wasn’t horrifying, but for some reason, personally, it was the letter he wrote to the judge defending himself that truly, deeply unnerved me.

If you’re unfamiliar with the story, Larry Nassar was accused by over 150 young women of sexually assault while in his role as a doctor for the USA gymnastics team.

For multiple days of the trial, each of Nassar’s victims described how his habitual, predatory behavior scarred them for years, and how many are still recovering. It’s impossible to hear the stories of the victims, most of whom were 12 or younger when the assaults began, and not feel the weight of the innocence taken by Nassar’s actions, and the bureaucracy that turned a blind eye to it. It’s impossible, that is, unless you’re Nassar. Here’s an excerpt of the letter he wrote to the judge, defending himself:

I was a good doctor because my treatments worked, and those patients that are now speaking out were the same ones that praised and came back over and over, and referred family and friends to see me. The media convinced them that everything I did was wrong and bad. They feel I broke their trust.

Hell hath no fury like a woman scorned. It is just a complete nightmare.

This letter, this insight into Nassar’s mind, is what hell looks like.

In the novel Deadline, author Randy Alcorn depicts a very different vision of hell than the Dante-influenced fire and brimstone depiction most are familiar with. Alcorn envisions hell as being a place of one’s own making, where Frank Sinatra’s lyric “I did it my way” comes to complete fruition. In Alcorn’s hell, you are isolated and alone, self-pitying, self-justifying and angry, still ranting about how unfairly you’ve been treated. In a chilling scene, a character in hell says that if Jesus offered salvation in that moment, he’d spit in his face.

What this character wanted wasn’t grace, but the reassurance that he didn’t need grace, that he’d really done nothing wrong, that everyone else was the problem. This was all I could think about after reading Nassar’s letter, of how Nassar’s own hell on earth keeps him from possibly admitting he has sinned.

What’s chilling to me about Nassar’s letter is how convinced he is of his own righteousness. Sure, I probably made some mistakes, Nassar believes, and yeah I’m sorry, but really it’s those hysterical women who are the problem. Nassar brought a Bible with him to court and spoke of praying for forgiveness, but it’s clear he has no idea what the message of Jesus is. Even the trappings of the Christian faith, when separated from Jesus’ call to first come and die, become monstrous.

In 1 Corinthians 1, Paul says that the Good News of Jesus is so radically counterintuitive, it seems like foolishness to most. The reason for this, I believe, is because while every other religious or spiritual structure that exists offers a form of self-improvement, the Gospel of Jesus offers only one path to salvation: utter surrender. Once you see this for what it is, God’s offer is the most beautiful thing in the world, but this only comes after the realization that all your efforts, all your self-justifications, all your pride, have all the purity of used toilet paper (which is not to far off from what Paul’s “filthy rags” really means).

Nassar is incapable of looking at his life, what he’s done, and admitting to it. For decades he has found ways to justify what he has done and why he is still a good person. That’s why it’s all someone else’s fault, because it can’t possibly be his, because that would make him bad. The weight of Nassar’s sin, if he truly felt it, would crush him.

This is precisely what Rachael Denhollander told Nassar during an in-trial, 36-minute statement. Denhollander was the first victim of of Nassar to publicly step forward, daring to accuse a highly-respected man who, to that point, seemed bulletproof to the allegations that were whispered about him.

In her statement Denhollander told Nassar that “In our early hearings, you brought your Bible into the courtroom and you have spoken of praying for forgiveness. And so it is on that basis that I appeal to you … Should you ever reach the point of truly facing what you have done, the guilt will be crushing. And that is what makes the gospel of Christ so sweet. Because it extends grace and hope and mercy where none should be found. And it will be there for you. I pray you experience the soul-crushing weight of guilt so you may someday experience true repentance and true forgiveness from God, which you need far more than forgiveness from me — though I extend that to you as well.”

It’s one of the most beautiful encapsulations of God’s grace I’ve ever read, but it carries with it a warning: grace only can be found by those who need it, and deep in the broken human condition is a resistance to admitting that need. Nassar, for now, cannot do that, but if Denhollander can hope he does, then so can we.

But even more pertinent to our lives is this: the human soul’s ability to fight grace is near-limitless. Nassar’s self-justification isn’t just horrifying because of what he did, but because a level of that self-justification lives in us. There is no one righteousness, not even one. Denhollander seems to understand this too, which might be why her family sang “Amazing Grace” before entering the courtroom, the hymn that starts with Amazing Grace, how sweet the sound, that saved a wretch like me.

Why Being a Friend of Sinners Is a Good Thing