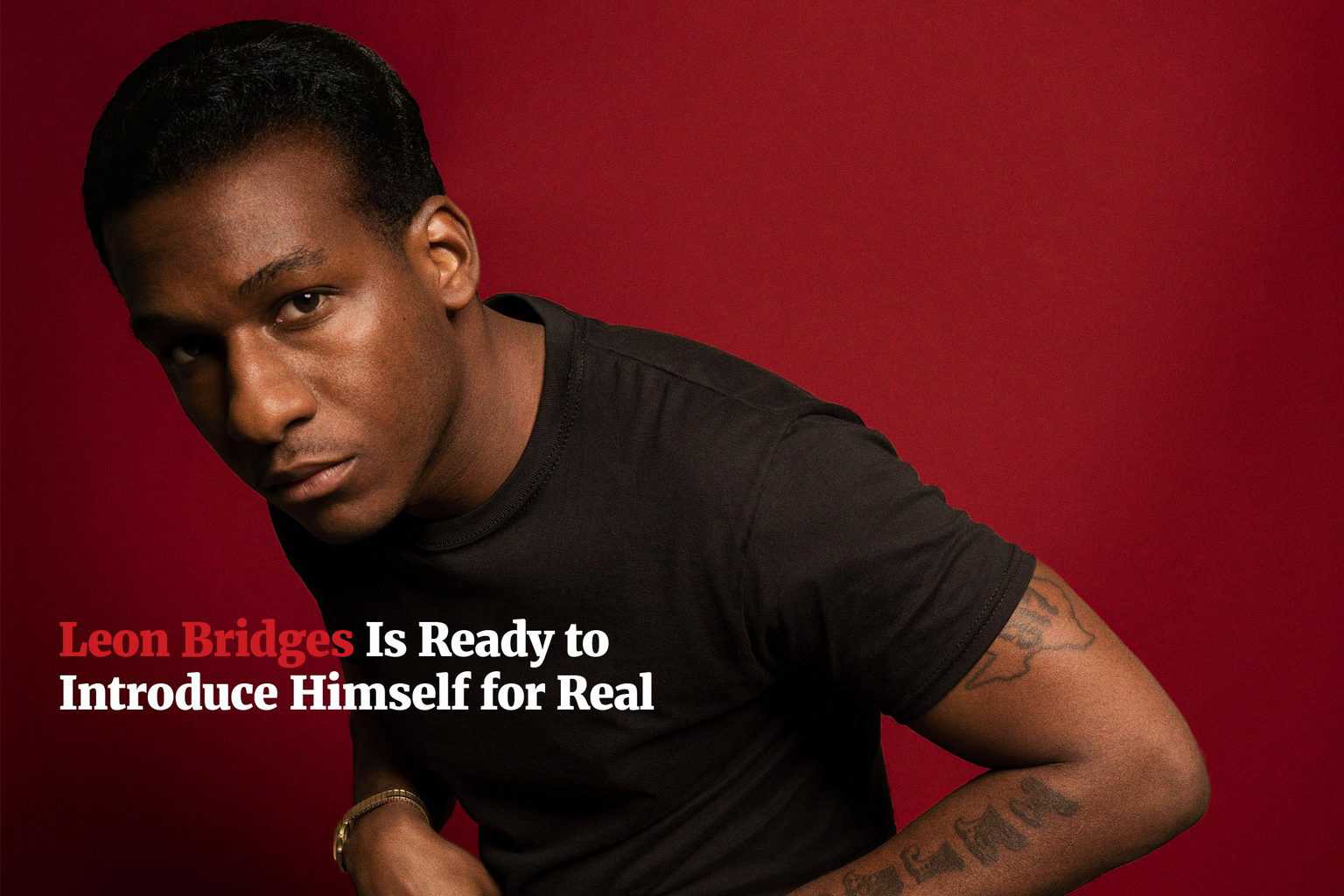 Leon Bridges isn’t real. Not in the way you think of him.

The man is there, of course: the exceptionally gifted Texas native who burst onto the music scene in 2015 and immediately seemed like he’d been there all his life. His debut album Coming Home felt familiar from the jump—the sort of songs that seemed so naturally and organically beautiful that you couldn’t believe nobody had come up with them before. It sounded like something written by the likes of Sam Cooke or Otis Redding, which is to say it sounded like something that’s just sort of always been there—like there were pages in the Great American Songbook purposefully set aside just for them. All this has lent Bridges an air of timelessness, as if he were an old soul in a 28-year-old’s body, rocking in his chair on the front porch, crooning about the bygone days that have come before and the women who have done him wrong.

And that’s the person who doesn’t exist.

“It really is a small percentage of who I am,” Bridges says. “I’m a young dude in modern times. And I grew up on modern R&B and hip-hop. A lot of people wouldn’t even know that my favorite thing to do is go out and turn up and party to Young Thug. I love trap music.” In fact, the first concert he ever went to was Christian rapper Tedashii’s.

“I definitely think in the beginning, I guess people expected me to be this kinda guy who …” he pauses for a moment. “I don’t know; I loved the sound from [that era]. I wanted to make that sound. But to me, it wasn’t about going out and going to swing dances and sock hops.”

So then, what was it about?

Bridges’ ascent began in his native Fort Worth, where he honed his songwriting skills while washing dishes at a local grill. At first, his writing was inspired by ’90s R&B, but it was when he wrote a song about his mother’s conversion to Christianity called “Lisa Sawyer” that he discovered a knack for ’60s soul. The song’s theme is one he frequently returns to. In the 2015 single “River,” Bridges sings about being baptized: Take me to your river / I wanna know / Tip me in your smooth waters / I go in / As a man with many crimes / Come up for air / As my sins flow down the Jordan.

Though he prefers not to discuss his personal faith in interviews, hints of his religious upbringing were found throughout his early music. But he clearly does not want to be labeled. (When a fan asked him on Twitter if he considered himself a “Christian artist,” Bridges replied, “No, a Christian that makes art.”) But, earlier on, when he was figuring out his identity as an artist, things did seem simpler.

“It was a special time, looking back in retrospect,” Bridges says. “It was on the cusp of when I was, I guess, I don’t want to say discovered, but I miss the whole grind. At that time I was washing dishes during the day, and I’d get off and it was such a joy to be able to go out and grind at the open mic and play in front of an audience. And I do miss that side of it.”

It was at one of these open-mic sessions that Bridges caught the attention of Austin Jenkins and Joshua Block, two members of the indie-rock outfit White Denim. They liked what they heard and invited him to record a few songs with them. Bridges took them up on their offer a short time later and dropped two songs on Soundcloud. One of them was “Coming Home,” which made it to a local radio station. A few months later, he was fielding offers from 40 different labels.

Looking back at that era of life, Bridges sounds genuinely wistful. He’s not resentful of success, but there is a cost to it, and in his case, that cost has been pressure.

“It was a little easier when I didn’t have all these eyes on me or any attention,” he says. “It was nice to
be in my own little bubble. And now that I’ve already established who I am and people know my work, there are always expectations as to what I can do in the future. It definitely affects my creativity.”

Being in that bubble certainly worked wonders for his creativity. Bridges’ debut album landed sixth on the Billboard 200, netted him two Grammy nominations and allowed him to collaborate with everyone from Kacey Musgraves to Lecrae. He entered a realm of stardom very few musicians ever reach, and he did it just a few months out from that dishwashing gig. Getting that famous that quickly, he says, caused a bit of backlash in Texas.

“I didn’t really have any expectations getting into it,” he says. “The biggest thing for me was when I did get signed and got a little bit of notoriety, it was crazy to see people in my hometown who, of course, I’d never met, say negative things like I didn’t deserve the opportunity and all this kind of stuff and that was surprising. And I have good intentions, so it’s crazy to see the negative comments and everything.”

However, the criticism can’t overshadow the incredible (and incredibly quick) success. “But everything’s good still,” he chuckles. In fact, if his latest album is any indication, things have never been better.

It’s difficult when people have a clearly defined idea of who you are and what you do. Some artists choose to lean into these ideas and allow fans to define their careers (think Coldplay).

It was a little easier when I didn’t have all these eyes on me or any attention,” he says. “It was nice to
be in my own little bubble.

Others actively react against it and seem to troll their fans by defying expectations (think almost any album Radiohead has ever released). For his second album, Bridges is trying to do, well, a little bit of both.

“I wanted to re- establish who I am as an artist and how people perceive my art,” Bridges says of recording his new album, Good Thing. “Of course, with my first album it was a very specific sound and was reminiscent of the ’80s R&B era, but I just wanted to be able to take elements from that and move it forward.”

In order to do that, Bridges utilized his new connections in the industry to put together a collaborative team led by red-hot producer Ricky Reed to help actualize his full potential. It took some getting used to, evidently.

“I mean, honestly, I’m really proud of myself. The whole process was a little challenging. This is my first time collaborating with different writers and working with a new producer.” The music business’ infamous sophomore slump grew into legend by being mostly true. There’s an old saying that you have your whole life to write your first album and just a couple years to write your second, so you’re naturally a little handicapped for the follow-up. That’s part of why Bridges decided to mix things up a little for Good Thing.

He brought in some other songwriters, expanded his sonic palette to include other genres. There’s the exquisite first single “Bet Ain’t Worth the Hand,” which is undergirded by peals of strings that sound plucked from Old Hollywood, while “If It Feels Good (Then It Must Be)” wouldn’t sound out of place on a Pharrell album. Of course, neither Pharrell nor anyone from Hollywood’s Golden Era quite had Bridges’ most potent gift: his voice, which is smooth as they come, while marked by a graceful tenderness. It adds a vintage warmth to even the most contemporary arrangements offered by the album’s team—a team, Bridges says, that faced some contentious moments during the recording process.

“I love the creative process,” he says. “But honestly, that was rough to be in
a room for a whole day and having to contribute ideas around other people. But we were able to make something dope out of it, and it was definitely a great learning experience.”

So there is a real person named Leon Bridges. He’s just not the person many people think he is. And Bridges means to continue to upset the apple cart. He says he recorded an album of ’90s R&B- inspired “super vibey stuff” that didn’t make this album, but that doesn’t mean it’ll never be heard.

“That’s my plan in the future,” he says. “Just singing and releasing stuff that is unexpected.”

That hasn’t gone over great with everyone—one downside to releasing things that are unexpected is the people who have expectations feel betrayed, and feel obligated to vent that their feelings on Twitter, Facebook and Instagram. There’s still a hint of frustration when he talks about people trying to label or define him in ways he feels like aren’t true. But, he seems to be OK with people not fully understanding the real Leon Bridges.

“I don’t understand how people get that energy to say negative things, Bridges says. “People should just really keep it to themselves. But most everything has been super positive. It’s all love.”