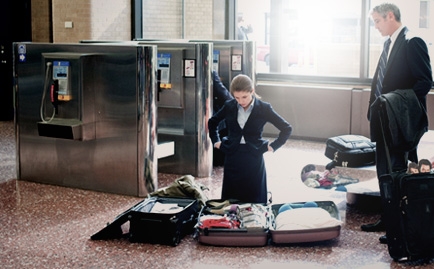 In Up in the Air (out now in limited release; opening nationwide Dec. 25), George Clooney plays a different kind of “everyman” than we’re used to seeing onscreen. Sure, he looks cool and happy as a traveling corporate downsizer—the guy hired as a “consultant” to bring the bad news of mass layoffs to average Americans when their own bosses lack the guts to make the announcement themselves. But under his seemingly perfect exterior is an underlying sadness that makes for some of the most humanely revealing moments on film this year.

And it’s not just Clooney who’s winning raves for his performance; Vera Farmiga (The Departed) and Anna Kendrick (Twilight) are both getting Oscar buzz this season. Director Jason Reitman (Thank You for Smoking and Juno) has been getting raves for his direction and the film has already won the Best Film award from the National Board of Review, an award seen by many as the first step toward an Oscar.

Reitman, who debuted with the adaptation of Christoper Buckley’s satirical novel Thank You for Smoking, also adapted the acclaimed book Up in the Air for this film.

“I pick up a book and almost immediately while reading I think this is something I want to adapt,” he says. “It’s like chess moves: you move things around, take this take out then that, then go through the book a second time and write something on each page I need something.”

If audiences are wondering how true Reitman stayed to the original work, “there’s no question of faithfulness,” he says. “If there’s something in the book that answers a question I have, I use what I need and not what I don’t. I tell the author I’ll capture their inherent voice but there will be differences.

“It doesn’t matter, he’s fictitious, doesn’t exist,” Reitman adds. “He’s not in the space-time continuum so it doesn’t really matter. It’s a movie about an epiphany, not a decision—a guy realizing the value of human connection. Doesn’t mean he needs it, and has to settle down or not to resolve it. I end the movie so that it makes you wonder what he’s doing, as it makes you think. The movie ends on clouds, this meditative shot that makes people think—what do you want in your life, who do you want in your life?”

Meanwhile, Anna Kendrick is in the midst of a career-defining month, as she returns in the supporting role of Jessica in the blockbuster Twilight: New Moon and yet makes a bigger splash acting opposite Clooney. She stars as a young hotshot at Clooney’s company who learns lessons on dealing with people humanely when he forces her to hit the road with him. For her, the role was a welcome challenge.

“It’s the best of both worlds—with Twilight I’m in something that means a lot to people but I realize I’m not the center of it, and then I get to the grown-ups table in Up in the Air,” explains Kendrick. “I’m not in the book of Up at all, but was added for the film so it wasn’t just an entire movie with George’s face and his inner monologue—I had a role in forcing him to explain his life and challenging him in order to justify that.”

Kendrick says the film is “really brave and honest”—and a story everyone can connect with. “Did you ever feel your future was up in the air? When I was 12 I was told by someone not to have a back up plan because if I did I’d fall on it,” Kendrick says. “I don’t know people my age with that kind of detailed plan, but a friend and I have talked about how in the corporate world, if you can be one of the boys and be a shark, you can conquer being born a female and not being taken seriously. It’s not true, but that drives Natalie.”

Vera Farmiga embodies the sexy yet mysterious role of Alex, a woman who gets involved with Clooney on alternately distant and intimate terms amid her own constant travels. Her performance is finally getting her the accolades many have felt she’s long overdue for.

“I’ve never really felt that my own acting career was ‘up in the air,’” says Farmiga, who builds on her breakthrough performance in 2007 Best Picture winner The Departed. “I’ve been steadily meandering through my career, working in good films but usually in festival films or off-Broadway plays and television. But I think the strong use of gender roles in the characters was there from the beginning in this script, and it was something I really wanted to latch on to.

“Usually when a female character is so demanding and unapologetic with her sexuality, she’s bereft of dignity. [Alex] had class here but operated in a masculine way, she set up the rules as being in it for the enjoyment of it and told Clooney’s [character] to ‘think of me as your self.’”

Yet it is that forthright sexuality (discussed and only mildly seen in the film, which keeps things classy) that makes her character controversial with audiences. The fact that Alex plays by the same rules as a male “player” ultimately becomes one of the most disconcerting aspects of the film.

“I don’t judge her, because when I execute a role it’s like a court appointed lawyer speaking in front of the jury of the audience,” says Farmiga. “This woman is complicated, has needs and I say ‘let’s not judge and just embody her and make her full bodied.’ That’s what great about [director Jason Reitman’s] characters so far. You may not like them—they’re full of foibles and insecurities—[but] as a mother who has to justify her time away on sets, choosing a film is a very spiritual process and I try to do the ones that explore the big issues.”

However audiences see Farmiga’s character in Up in the Air, it’s obvious that she—along with Reitman and the rest of the cast—is at the forefront of award season conversation. Make no mistake: Up in the Air deserves the critical acclaim it’s been getting. It taps into the cultural climate of job loss and confusion and humanizes the whole situation in a way that, regardless of state of life, is both thought-provoking and life-affirming.