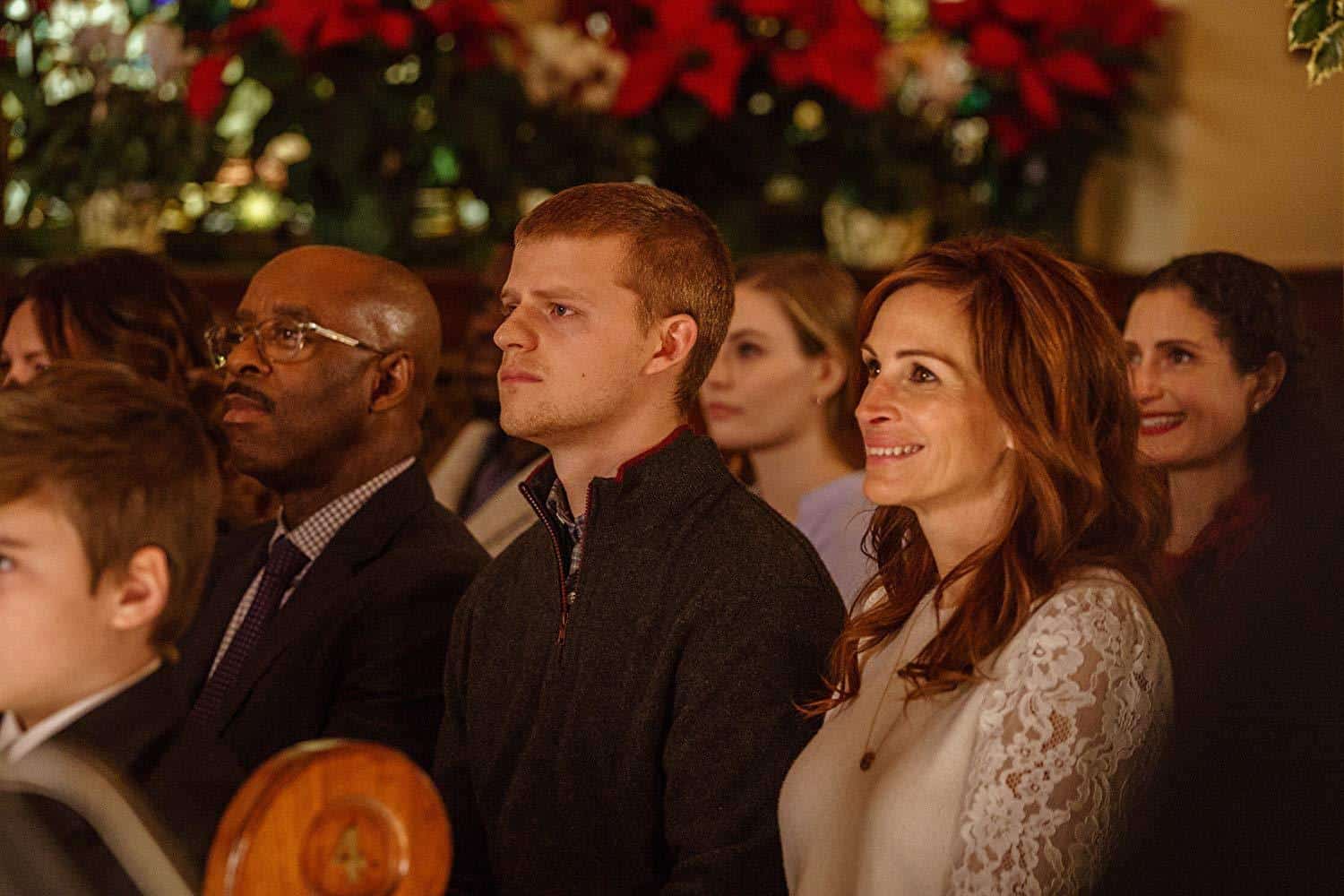 Peter Hedges’ film Ben Is Back begins with a complicated homecoming. Recovering opioid addict Ben (Lucas Hedges) unexpectedly shows up at his family’s doorstep on Christmas Eve as his mom Holly (Julia Roberts), sister Ivy (Kathryn Newton) and two young half-siblings are coming home from pageant rehearsal. Nobody’s expecting Ben’s arrival (he’s supposed to be in rehab), and in a moment that resembles The Parable of the Lost Son, his family’s reactions tell the audience a lot about the current status of their relationship.

Holly, overjoyed, jumps out of the car to greet her son. Ivy is less enthusiastic and hangs back. As they go inside, Ivy reminds her mother that Ben’s presence last Christmas brought about a lot of trauma. He might look better, but he can’t be trusted. Holly shrugs off her daughter’s warnings, but even so, she still goes through every cabinet in the house hiding prescription drugs. Meanwhile, Ben is in the next room, distracted by his younger siblings, but still aware that his arrival isn’t the joyous reunion he hoped for.

Ben Is Back is a film about addiction–what it’s like to be a recovering addict, and what it’s like to love one. But even more so, it’s also a movie about redemption that reflects Jesus’ lesson in the Book of Luke through a powerful illustration of forgiveness. Roberts’ performance presents fierce, unrelenting love through Holly’s faith that her son will get better. As Ben, Lucas Hedges suggests that kicking a drug habit is just the start of a long, hard road of reckoning, as the increasingly troubling details of Ben’s past actions come to light.

As the truth of Ben’s past clarifies over the course of his 24-hour stay with his family, Holly begins to question her son’s claims of recovery, and Ben’s already shaky confidence takes a major hit. On a trip to the mall, Ben sees an old friend who’s still hooked, and Holly encounters the doctor who first prescribed Ben’s meds, now weakened by dementia. At a support group meeting, Ben shares his progress, which Holly listens to with pride. Afterward, Ben’s confronted by a recovering addict whose downward spiral he helped cause.

The uneasy tension reaches a breaking point when the family return home from their Christmas Eve church service to find their dog’s been stolen. Holly and Ben’s odyssey through town to track down their pet plays like an anti-It’s a Wonderful Life. Instead of seeing the positive impact Ben’s life has had on others, Ben and his mom get a tour of the damage he did to himself and those around him while his life was at its lowest point. For Holly, it’s a crucible that further forges her dedication to help her son get well. For Ben, the reminders of his desperate past cause him to question whether he even deserves to be healed.

Themes of sin, confession, forgiveness and whether forgiveness is “deserved” are exactly what make The Parable of the Lost Son so powerful. It’s a story that’s full of suggested emotional complexity, the same kind that Ben is Back brings to the fore. In the parable, the forgiveness of the younger son by his father is moving because we understand how difficult it was for the younger son to come home in the first place. The indignance of the loyal older son resonates not only because we know what it’s like to be under-appreciated, but because we get that he might resent his younger brother for the pain his disrespect likely caused their father.

Ben is Back echoes these same ideas by giving its audience a realistic, often imperfect portrait of unconditional love and forgiveness. Hedges presents characters whose words and actions come from differing perspectives, but are always sympathetic. Holly knows Ben could be lying to her at any moment, yet chooses to believe the best of him, because, as his mother, she has no other option. Ivy’s distrust of Ben comes not from prudish self-righteousness (a problem that dogged Hedges’ other black sheep holiday tale, Pieces of April), but from a genuine concern that Ben will break his family’s hearts again. Ben’s return is no selfish act, but done because he wants to show his family that he’s actively trying to be a better person.

Christians hear about grace and forgiveness so frequently that it can easily be taken for granted. We often forget the humility and courage it takes to admit when we’ve done something wrong, or the vulnerability inherent in trusting that someone means it when they say they’re sorry. Ben Is Back creates its own modern day forgiveness parable that acknowledges all of these emotions. Peter Hedges’ film shows us how difficult it can be to ask forgiveness, and to forgive. By doing so, the film reminds us that the same redemptive grace that gets us through our darkest hours is also there for us in our everyday struggles.

Here’s What We Know About ‘Us,’ Jordan Peele’s Crazy-Looking New Thriller