This summer, Jordan Peele’s Nope kicked off with a Bible verse: “I will pelt you with filth, I will treat you with contempt and make you a spectacle.” It’s a fitting and thematically resonant passage from Nahum 3:6, one that dutifully sets the table for what you’re about to experience. And it’s a favorite filmmaking trick — using a little of God’s Word to lend your picture a sense of gravitas and eternal importance. Peele, being a fastidious filmmaker, nailed it.

But other filmmakers haven’t been quite as cautious. A long time ago, some Hollywood writers realized that you don’t have to actually quote the Bible to use the Bible. If you just write a paragraph with some heavy “thees” and “thous,” throw a little King James-ian flourish on the verbs and have your actor deliver the line with a lot of confidence, even viewers reasonably well-versed in the Bible might just buy it.

Want proof? Here’s a few movies that use Bible verses you won’t actually find anywhere in the Bible. 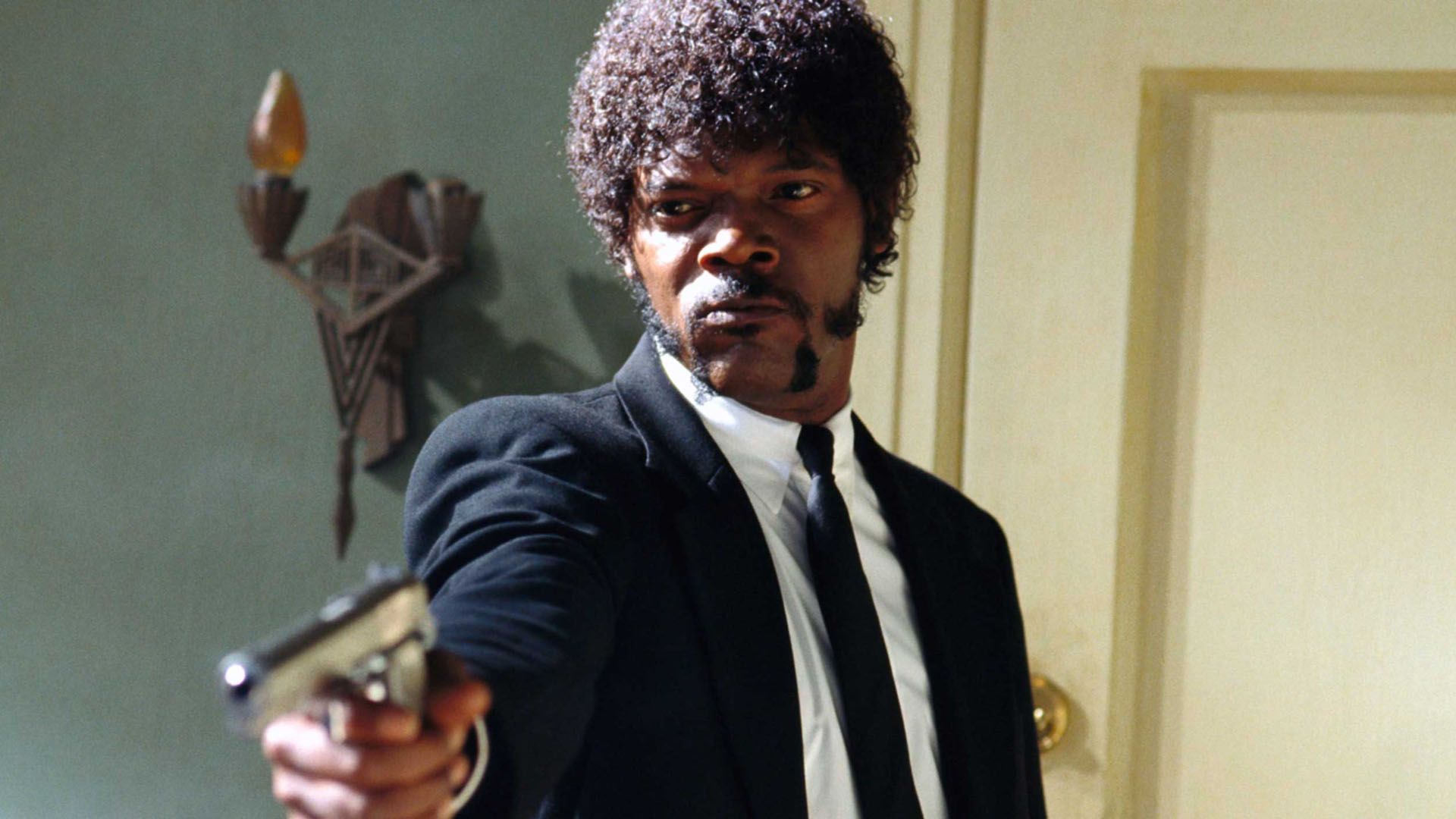 You probably already know about this one, since it’s one of the most famous film sequences of the 90s that has almost become equally famous for making stuff up. As Jules, Samuel L. Jackson is fully terrifying in this scene as he spouts off Scripture about how “you will know my name is the Lord when I lay my vengeance upon thee.” It sounds biblical. We’ve even got a reference: Ezekiel 25:17. But Quentin Tarantino heavily tweaked the language to work in the themes he was most interested in.

For all his famed excesses into violence, Tarantino is really an idealist at heart. He loves to make movies about an alternate timeline where historical events had happy endings. Hitler gets what’s coming to him. Sharon Tate survives. A formerly enslaved man gets justice. But with Pulp Fiction, he pulled off his slyest case of revising history, convincing many that his fictional passage from the Bible was real. 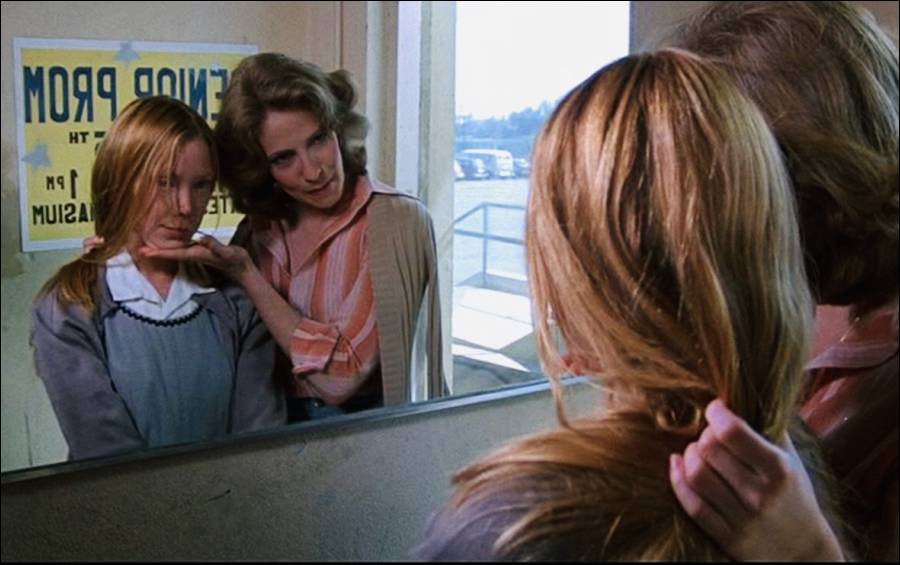 This one isn’t really a verse so much as a little piece of biblical trivia that Carrie’s psycho mom gets wrong. “The first sin was intercourse,” she tells Carrie, using religion to stuff any ounce of personality Carrie starts to manifest into a box of shame and guilt. That rarely ends well and in Carrie things go particularly awry.

For someone who seems to care about the Bible so much, Carrie’s mom Margaret doesn’t seem to know much about it. The first sin in the Bible isn’t “intercourse.” Strictly speaking, you won’t find any verse in the Bible that calls sex in and of itself a sin. But then, it’s a safe bet that Stephen King knew that when he wrote the book and that he was making it clear that Margaret wasn’t actually interested in Christianity, but control. 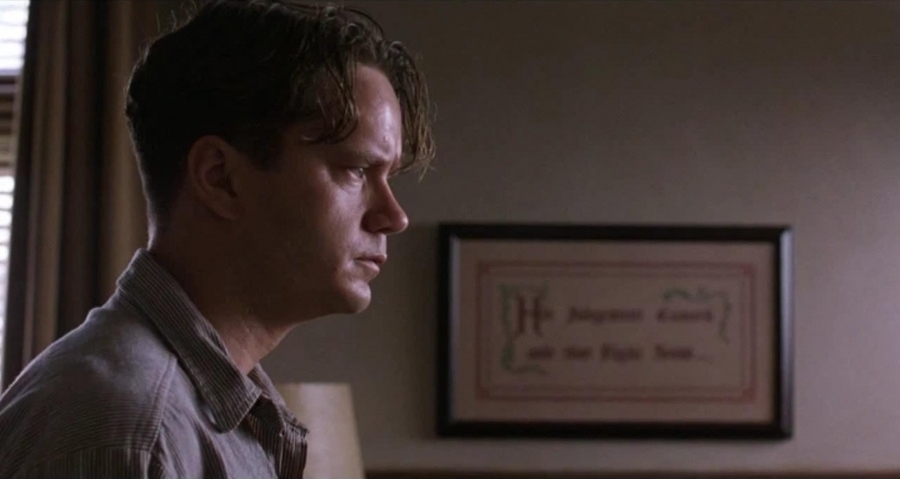 “His judgment cometh, and that right soon” is the Bible verse on the cross stitch in the warden’s room that serves as Andy’s arbiter of injustice. It’s clearly intended to be God’s warning to the guilty. But God never said it. At least, not exactly.

Ecclesiastes 21:5 says, “A prayer out of a poor man’s mouth reacheth to the ears of God, and his judgment cometh speedily,” which is probably the closest the Bible gets to the Shawshank verse. What’s notable is that while the warden’s focus is on the speedy judgement of God, the verse itself is more concerned with the plight of the oppressed, and how attentive God is to their need.

As an aside, both this and Pulp Fiction were 1994 films with fake Bible verses in them. Something was in the water that year. 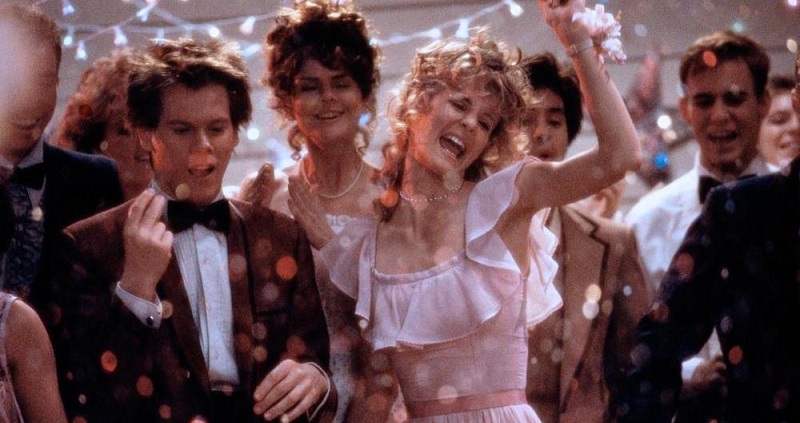 “Praise ye the lord. Sing unto the lord a new song. Let him praise His name in the dance.”

That’s the verse the pro-dancing contingent of Bomont use to argue that the uptight, anti-dancing Christians around town need to cool it. Fair enough! The Bible is definitely pro-dancing. David, famously, really cut loose in a garment so skimpy his wife was upset. And, believe it or not, that verse is indeed in the Bible! Kind of.

Sing to the Lord a new song, His praise in the assembly of His faithful people.
Let Israel rejoice in their Maker; let the people of Zion be glad in their King.
Let them praise His name with dancing and make music to Him with timbrel and harp.

It’s easy to see why Footloose might skip over the part about Israel assembling, and trimbrels and harps and such. Those things aren’t exactly relevant to the Footloose storyline, but they do set important context for the kind of dancing the Psalmist is talking about here. It’s not exactly an exhortation to leave it all on the dance floor for senior prom. 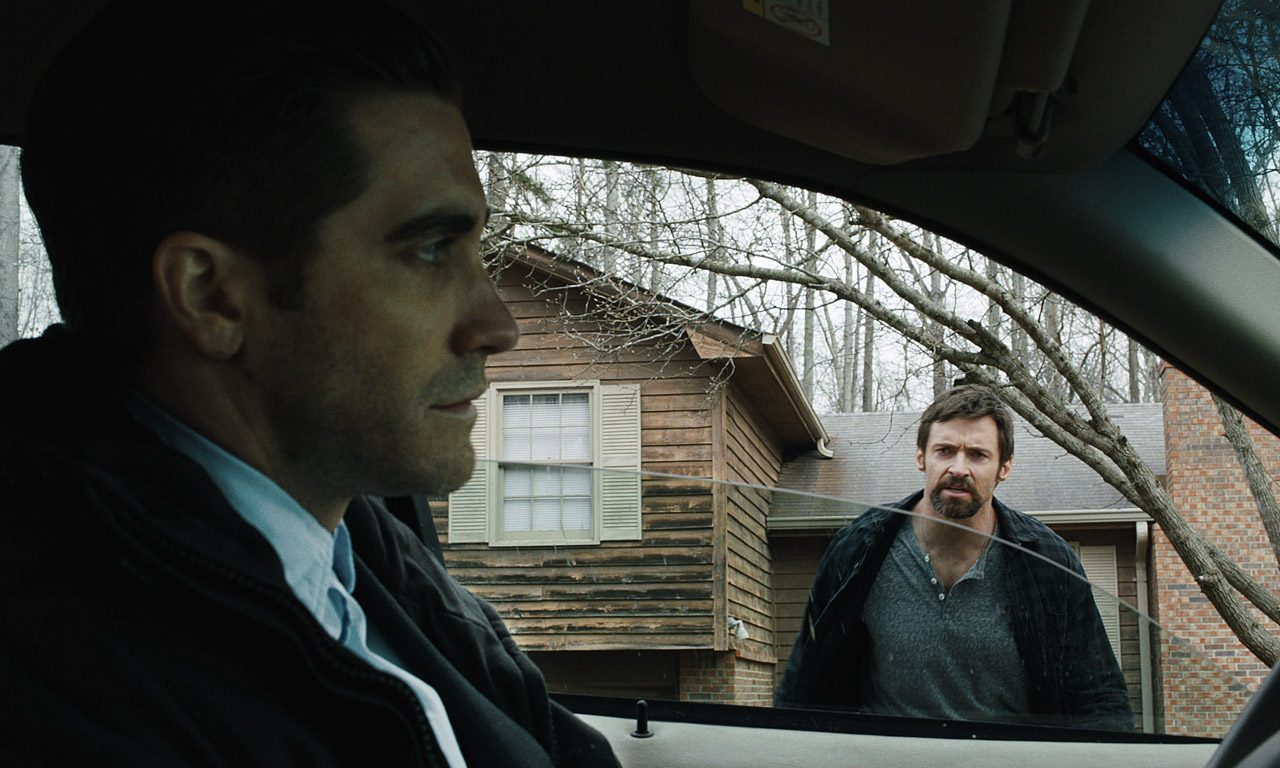 “Our Father, who art in Heaven, hallowed be thy name. Thy kingdom come, thy will be done, on earth as it is in heaven. Give us this day our daily bread, and forgive us our trespasses, as we forgive those who trespass against us. Lead us not into temptation, but deliver us from evil. For the kingdom, the power and the glory are yours, now and forever. Amen.”

The tricky part comes at the end. “For the kingdom, the power and the glory are yours, now and forever” is not actually found in the Bible. If you read Matthew 6:9-13 and Luke 11:2-4, you’ll see that Jesus ends his prayer with the line about delivering us from evil. The New King James Version does include “for Yours is the kingdom and the power and the glory forever. Amen,” but it’s not a phrase found in any of the earliest Greek manuscripts.

So why do we say it? Most likely, this bit of Doxology started being added to the Catholic liturgy and then Protestants picked it up too in the 1600s.

Again, this is so common that it’d almost be weirder if Prisoners didn’t include it at the end. But it’s not technically in the Bible. 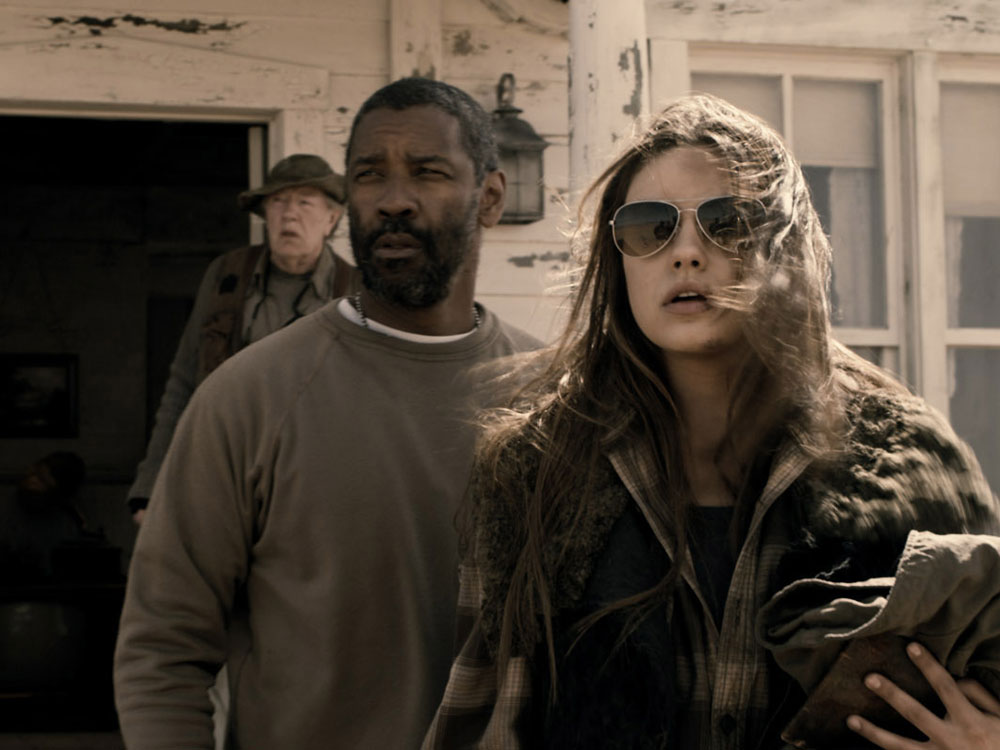 The Book of Eli sounds great on paper. Denzel Washington and Mila Kunis are trying to stay ahead of a sociopathic Gary Oldman in a post-apocalyptic wasteland with only their wits, Washington’s seemingly preternatural fighting ability and a weirdly golden color grade. In execution, it doesn’t all quite come together as thrillingly as it should. What it does have is a lot of focus on the Bible, which makes it all the weirder that it gets it wrong.

“Cursed be the ground for our sake. Both thorn and thistles it shall bring forth for us. For out of the ground we were taken, for the dust we are, and to the dust we shall return.”

Close, but no cigar. That’s a heavily redacted spin on Genesis 3:17-19, which reads in full: “Cursed is the ground for your sake. In toil you shall eat of it. All the days of your life. Both thorns and thistles it shall bring forth for you. And you shall eat the herb of the field. In the sweat of your face you shall eat bread. Till you return to the ground, For out of it you were taken; For dust you are, And to dust you shall return.”

“I remember Revelations 7:12,” says Ray Stantz (Dan Akroyd). “‘And I looked, and he opened the sixth seal, and behold there was a great earthquake. And the sun became black as sackcloth, and the moon became as blood.'”

Sorry, Ray. You actually don’t remember it at all. First of all, it’s the Book of Revelation (singular). Second, it’s Revelation 6:12. Third, it’s, “And I beheld when he had opened the sixth seal, and, lo, there was a great earthquake; and the sun became black as sackcloth of hair, and the moon became as blood.” We expect more from our Ghostbusters. 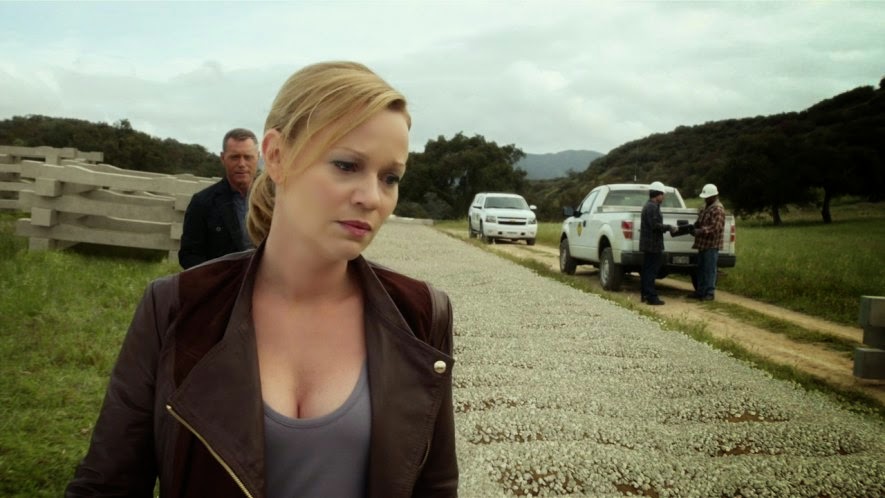 “Money is the root of all evil.”

This is an interesting one, for a few reasons. First off, yes, the abysmal Atlas Shrugged adaptation was only quoting the famous speech from the book, so this misquote is more Ayn Rand’s fault that the filmmakers themselves. But secondly, the misquote is interesting because if Rand correctly quoted the Scripture she was referencing here, it would undercut her entire premise.

“So you think that money is the root of all evil?,” asks Francisco d’Anconia in the book. “Have you ever asked what is the root of money? Money is a tool of exchange, which can’t exist unless there are goods produced and men able to produce them. Money is the material shape of the principle that men who wish to deal with one another must deal by trade and give value for value. Money is not the tool of the moochers, who claim your product by tears, or of the looters, who take it from you by force. Money is made possible only by the men who produce. Is this what you consider evil?”

Well argued, maybe. But that’s not what the Bible says. In 1 Timothy 6:10, Paul writes that “For the love of money is the root of all evil: which while some coveted after, they have erred from the faith, and pierced themselves through with many sorrows.”

This is a much more nuanced point than Rand cares to deal with in her objectivist treatise. Paul is cautioning believers against loving money, and that’s an important warning. In America, we care a lot about money. It takes an extremely sensitive heart to know when we’ve fallen into the trap of loving it. It can happen subtly, in small ways that open us up to a lot of hurt or, as Paul puts it, “many sorrows.” Nobody is immune from this temptation and we need to get it right.

But by getting the verse itself wrong, Rand isn’t trying to get it right at all. She’s refuting a point the Bible doesn’t make.

We Don’t Need Another Hero