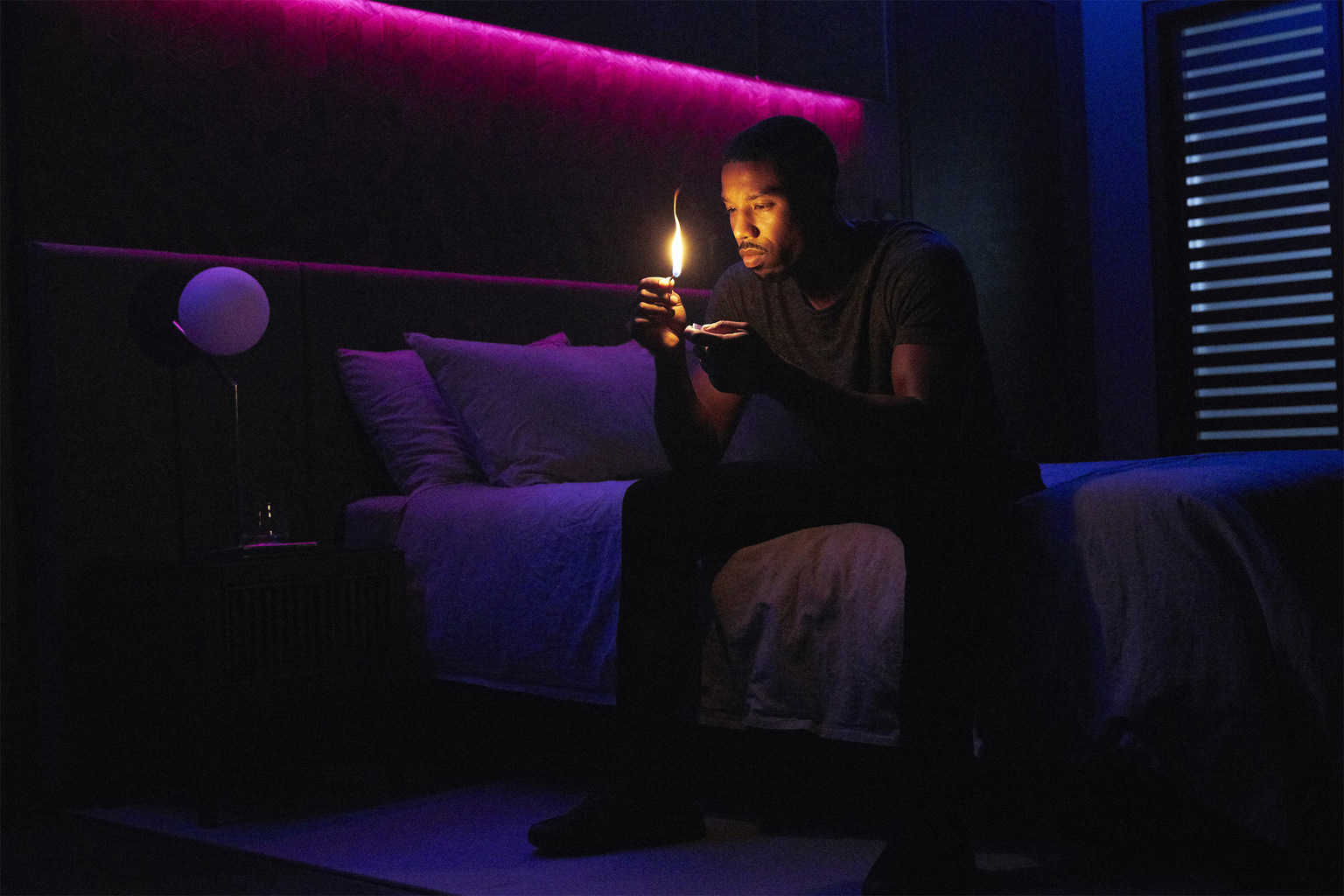 The new Fahrenheit 451 movie is not shy to remind us that “a little knowledge is a dangerous thing,” so it’s fitting that Ramin Bahrani’s adaptation of Ray Bradbury’s 1953 novel is full of characters telling us exactly what they think, and what we should think about that. It’s an echo of the world it predicts—fast, disconnected from humanity, with everyone giving a sound bite version of how they feel.

In this vision of Fahrenheit 451’s tomorrow, a monster-internet of sorts called the Nine boils all social-network interaction and data into a handful of words and an array of symbols. “Natives” support the Ministry’s all-tech society and fight a war against “Eels,” who cling to analog devices and hoard forbidden books. Natives can watch book-burnings live and send emojified reactions. Firemen like Guy Montag (Michael B. Jordan) and his chief Beatty (Michael Shannon) are veritable celebrities.

Bradbury’s novel predicted numerous technologies—wireless earbud “seashells,” walls of “interactive television,” medical machines that replace someone’s blood, a robotic hound that smells people and hunts them down. Bahrani updates the look of the world to feel more relevant to modern times, but the endangered feeling of the written word—and of critical thinking in general—needs no update.

Clarisse McClellan (Sofía Boutella)—in this iteration, she’s a jaded double-agent revolutionary instead of Guy’s ethereal 17-year-old neighbor—explains to Guy that in their world, people were only reading headlines, and eventually they stopped reading altogether. It’s a prescient point, but ironic, because in this future everyone can only process a blunt version of an idea, and the movie does exactly the same thing. Every point the book makes with a human interaction, the movie makes with a speech.

In the movie, we learn “books are bad, thoughts are dangerous” through a loud speech from Guy and Beatty. In the book, Guy has a conversation with Clarisse in which her questioning, free-flowing train of thought makes him uncomfortable and defensive.

In the movie, Guy starts to question his reality when Clarisse tells him to question it. In the book, Montag questions his reality because Clarisse asks him if he’s happy, and he realizes he’s never even considered it.

In the movie, we see Montag become conflicted when he starts interrogating the Alexa-like home device Yuxie, or in his vague flashbacks about his deceased father. In the book, the same conflicts emerge in Guy’s despairing, disconnected interactions with his wife Mildred, who overdoses on sleeping pills, loses herself in the walls of television around her, and keeps the music ever-playing in her ears.

It’s difficult for any sci-fi to create a dystopian future we haven’t already seen, but it’s worth noting that the worlds which persist are marked by memorable characters. Arrival is about communicating with aliens, but it’s powerful because we experience it through Amy Adams’ loneliness and grief. For all the “explaining scenes” of Inception, the heart of the story is about a man who lost his wife to suicide and is fighting his way back to his children. Every episode of Black Mirror is about futuristic tech, but only inasmuch as it affects a human drive: jealous paranoia, grief, romance, our desire to be liked, the inability to let go of our children, etc. Adversely, in Fahrenheit 451, it’s easy to disengage from the movie’s ideas because we’re not seeing them through the lens of the human experience.

And we miss that, because that’s what how ideas actually affect us. We don’t live in a vacuum, and by people living in our proximity, traumatizing and inspiring us, we form new neuroses, prejudices, epiphanies. These cause us to shed skins, leave villages, find new tribes. We form ideas from people, and it affects how we live with each other and live with ourselves going forward. That’s what ideas look like with flesh and blood on them, and it marks the difference between a PSA and a piece of art.

Perhaps the best example of the movie’s shortcomings is its climax. In both book and film, literature is saved by an underground community memorizing books to preserve for the future—each person choosing to embody a different written work. The film diverges, however, when all that knowledge is transferred to a DNA strand called OMNIS, which will be inserted in a bird, which will propagate until the minds of the whole world are infected by a virus that contains all the consciousness and ideas and creation of all of recorded history.

In other words, ideas (beautiful and complex or not) are forcibly installed in the minds of the masses. It’s hard to think of anything more literally disconnected from character, and clearly antithetical to Bradbury’s basic theme of the novel: People deserve to think freely.

This biological warfare is meant to signify hope—that these ideas will live on forever—but if Bahrani expects anyone to think about this movie in the future, he might have given us characters alive enough to carry those ideas themselves.

Jaz Persing is a writer, singer, and human living in Los Angeles, working in television when she can. Her blog appears at ohyouwantgoodjaz.com.