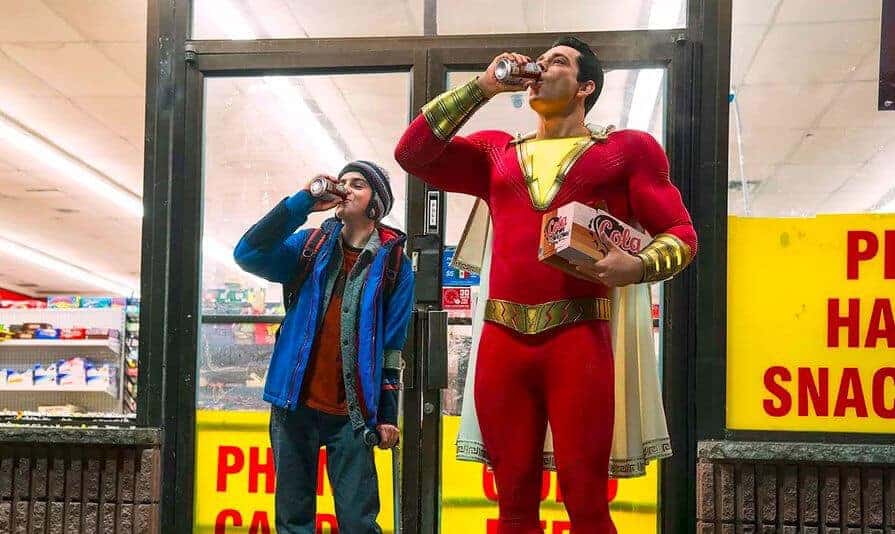 We eat shawarma with Marvel, but we bow to DC. The latter company’s heroes are defined by their aspirational ideals rather than their flaws: Batman’s morality, Superman’s humility and Wonder Woman’s truth. These aren’t your buddies; they’re your saviors. Shazam, DC’s latest big-screen venture, is here to change that. Its titular hero might be the newest arrival to the company’s imposing house of gods, but don’t worry, he brought the party. This movie rocks.

Shazam begins his story as a punk foster kid named Billy Batson. As Billy bounces from home to home, a rare act of goodwill sends him to a mystical wizard who grants him the ability to become a Superman-esque adult with the utterance of a magic word: Shazam! That’s how Billy becomes Shazam, an adult superhero played by Zachary Levi.

It’s an unquestionably goofy premise, so Shazam skirts the bro-metal headbanging of Justice League and Aquaman for a vibe that’s all high jinks and slapstick. Put this down as the funniest superhero movie in either the Marvel or DC camp. Shazam’s jokes hit with the rapidity of its hero’s lightning-strike powers. It’s in on the bit.

Its self-awareness means Shazam is as much about the joys of being a superhero as it is anything else. Everyone’s been asked which superpower they’d have if they could pick, and Shazam revels in the chance to test out almost all of them. In this movie, being a superhero is a blast. So fun, in fact, that it short-shrifts its own good vs. evil plot. Shazam is up against Dr. Sivana, a man possessed by the Seven Deadly Sins, but their conflict is underdeveloped and kinda nonsense. Who cares? The shortcomings are an easy trade for the much better sequences in which Billy/Shazam learns how his powers work. Those parts rule.

When Zachary Levi—truly a perfect casting choice, but more on him later—punches through a cement pillar, discovers he’s bulletproof and figures out how his lightning hands work, his glee is infectious. Like all comic book movies, Shazam’s powers come with a choice, but there’s no sermon about responsibility or the burden of power here. Shazam just wants to revel in all the cool stuff its hero can do. This guy has electricity in his fingers and he walks around charging people’s phones. That’s awesome! Superheroes are awesome! I wish I could do that!

Levi brings it all together. He doesn’t just deserve praise for his comedic presence in Shazam, but also how well he plays with the kids and adults opposite him. Watching him is like watching a star athlete bring out the best in their teammates. He’s chummy with the young actors, a great contrast to Mark Strong’s villain and a versatile tonal wildcard, switching from hero to goofball to bro to brother figure with deftness and ease. It’s impossible not to love this guy.

Put Levi amid the ranks of great off-screen superhero actors, too. He’s a really good dude. When he graced the cover of RELEVANT in 2010, Levi was hosting a church service in his house every week and opening his home to people in Hollywood who needed a place to stay. Back then, he told the magazine: “To me, it’s not rocket science. Go about your day putting your faith in God and standing on truth. It’s pretty easy: Are you a jerk or not? Are you doing things to benefit you, or others?”

That outlook, combined with his joyous heroism in Shazam, outfits Levi with a DC-rooted persona as aspirational as Gal Gadot’s Wonder Woman, Chris Evans’ Captain America or Brie Larson’s Captain Marvel. He walks the walk as much as his character.

Breaking into the MCU or the DC Universe is more than just a lucrative career move for actors now. The costumes and capes, whether sleek like the Iron Man suit or gaudy like Shazam’s balloon-ish muscles, now demand the performers to be heroes away from the screen, too. These aren’t characters now; they’re platforms. That’s why you see Larson and Gadot speaking more fervently about equal pay and feminism, and why Chris Evans goes so hard when he engages with politics. These people aren’t just stewards of characters we love, but stewards of cultural values, too.

That’s why Levi—and Shazam—transcends superhero fatigue. For one thing, it feels great to watch a weightless, carefree comic-book movie in the age of Infinity Wars and Endgames. For another, Levi’s a guy you want to cheer for on and off camera. As Shazam succeeds, his platform will grow, and this is a guy you want in the cultural conversation (not to mention more blockbusters).

Shazam doesn’t have the regal underpinnings of Aquaman or the cosmic scope of Man of Steel, but it soars above both thanks to its earthly fixtures. It tells amazing jokes, showcases people you’d want to be buddies with and throws every DC stereotype out the window. A god should inspire awe, but it’s fun when you can have a relationship with them, too.

Report: Hundreds of Iraqi Christians in the U.S. Are Under Threat of Deportation