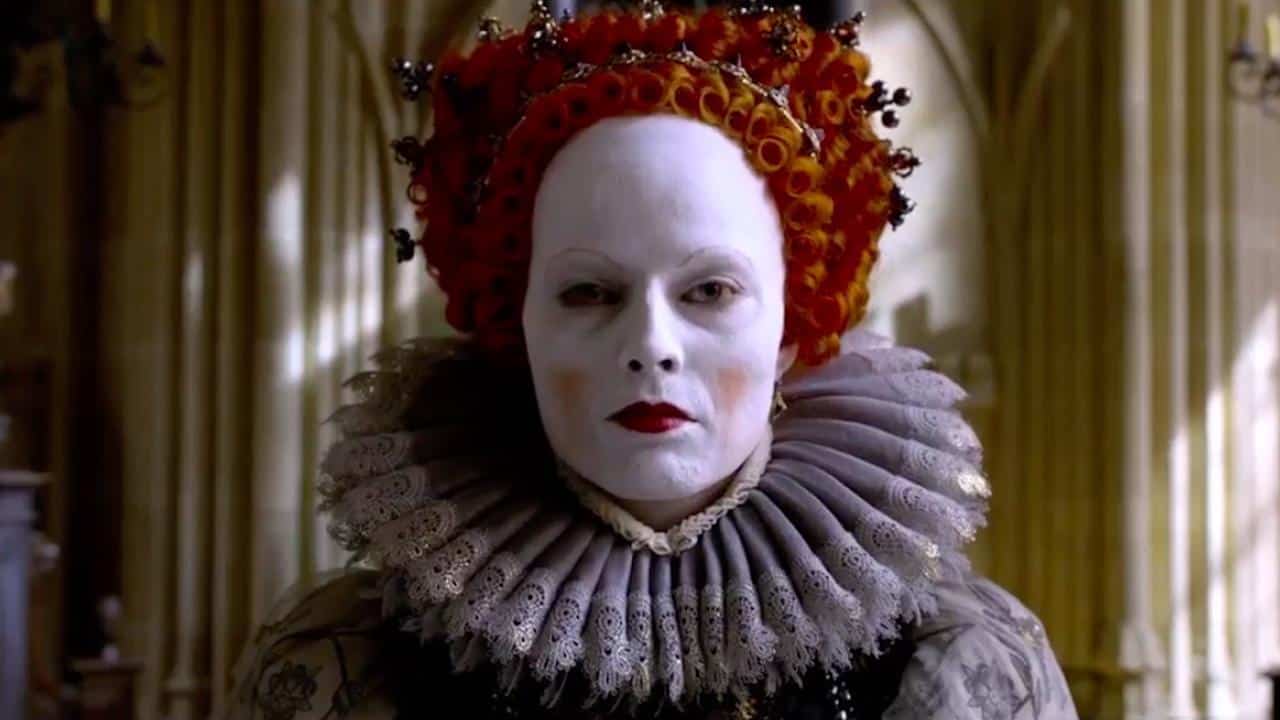 Mary Queen of Scots is full of posturing. Its central conflict features two opposing women fighting to maintain their own agency and power amid male-heavy institutions and in the face of one another. There are lots of displays of strength—some fake, others legitimate—and through the course of the movie you watch how effective those displays prove to be.

Maybe the history here is a bit simplistic, but the modernity of the story is anything but.

Here’s the summary of the Wikipedia summary of the war between Mary Queen of Scots and Elizabeth I. Mary Stuart (played by a steely Saiorse Ronan) is the queen of Scotland, but she also lays claim to the English throne. That crown is held by Elizabeth I (Margot Robbie), who’s struggling to produce an heir. As Elizabeth sinks deeper into despair over her fading legacy and bloodline, Mary Stuart endures a cycle of betrayal, murder and conspiracy that ultimately compels her to seek refuge with Elizabeth, the very woman whose throne she’s threatening.

Instead of harboring Mary, Elizabeth locks her up for years before finally executing her for an accused assassination plot.

The history is dramatic enough, and Mary Queen of Scots is considered enough to make its embellishments on the visual side of things rather than through an abundance of narrative conveniences (which are a given in this sort of movie anyway). The movie has a rustic sort of splendor, with scenes feeling lavish and beautiful more for their chilly backdrops and accent-heavy color palettes than the decadent halls and ornate costuming you’d see in something like, say, The Favourite.

It’s a smart tactic, because it walks the line between realism—these were wealthy, privileged royals, after all—and intentioned set-dressing. Mary and Elizabeth were in subtle ways oppressed, for sure. Mary Queen of Scots might not have the searing gender politics that come to the surface in Widows, but it does bank a great deal of drama on its queens suffering and overcoming wicked men. Forced marriages, conniving suitors and manipulations against the crown abound in Mary on both sides, but the women hold their own.

The uphill battles of Mary and Elizabeth are both period-specific and frustratingly modern. There isn’t any anachronistic winking here, thank goodness, but it’s hard not to engage in a “this is happening right now” reading of the movie given its moment of release.

That leads us to the second intelligent move of Mary Queen of Scots, which is that it ultimately leads the male-female pettiness behind in favor of richer, more compelling drama between its two female leads. Once Mary and Elizabeth rise above the men sandbagging their ambitions, the movie devotes its third act to their one-on-one slugfest.

It liberates the whole movie, and it culminates in one of the best-acted scenes of this awards season.

Kept separate for the entire film up to this point (save for one cross-cutting birth sequence that, even with its tiny fakeout, might be the peak of the movie), Ronan and Robbie are given one thunderous scene together in their fateful meeting.

Everything serves the moment, from coy set design to the delicate costuming to the way their dialogue unravels each of them (both literally and figuratively). It’s a snakebite, and it caps Mary Queen of Scots with a sharp sense of venom that injects everything that comes after. The movie’s smart to call it curtains a few minutes later. This one couldn’t be topped.

History buffs might find this scene a bit problematic for its simplicity—by this point most viewers will have sided with Ronan’s Mary Stuart over Robbie’s Elizabeth, which kind of diminishes the nuance of their real-world conflict—but if you come for the movie stuff, it’s a reward in and of itself.

All of the posturing we see beforehand—the women before their subservient men, their subjects, their maids—pays off here, and it clarifies which earlier moments were facades and which were true. Mary and Elizabeth are never more honest than opposite each other, and in this movie it’s the unique woman-to-woman conflict that makes that possible.

In that moment especially, it’s thrilling to see a royal drama throw off the shackles of marriage dramatics and birth claims and let two women put their desire for power forward and do battle over their aspirations instead of over a man. Some might deride that as nevertheless a vapid or vain or aggrandizing goal, but come on—guys have been warring over thrones and money and prestige for decades in cinema.

Mary Queen of Scots (quibbles and all) is worth the opportunity to tell more challenging female-driven narratives going forward. Women deserve the same sort of stories and they deserve the chance to not always be drawn with clean-cut regality. Just let them fight.

And Just Like That, Kevin Hart Is Out as Oscars Host for Past Anti-Gay Comments