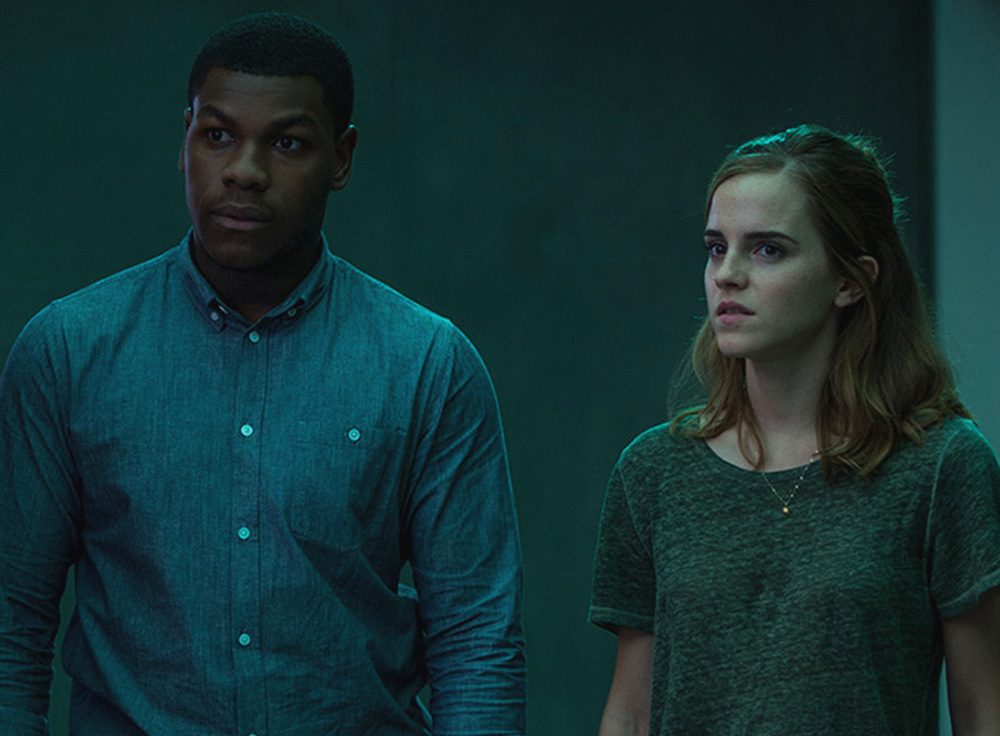 “What did you do last weekend,” a perky millennial office worker asks Mae, a customer service rep.

“I helped my dad, who has MS, and then went kayaking by myself,” Mae replies, played by the Emma Watson.

“You should have let us know. We have four support groups for MS on campus, two for the children of MS. And a bunch of us kayak. You should join one of the member kayaking groups,” the co-worker replies.

Mae glances sideways, uncomfortable at being challenged, albeit in a positive tone of voice, simply for helping her sick father and enjoying some time alone on the Pacific Ocean.

It’s one of the best scenes of The Circle, a dystopian thriller about a technology company in the vein of Apple, Google and Facebook that grows too invasive into the lives of its users.

On paper, the movie has a lot going for it. It’s based on a novel by Dave Eggers, a writer who’s been nominated for the Pulitzer Prize. Tom Hanks, comedian Patton Oswalt, John Boyega (of Star Wars: The Force Awakens fame) and the late Bill Paxton (in his final role) round out the cast.

Only one problem: None of it works. This cadre of top-notch actors seem to be just as bored as the audience with the lackluster execution. But The Circle does bring up some timely questions, which can be applied just as much to American churches in 2017 as the smartphones in our pockets.

The saddest part of The Circle is not that it’s a bad movie, but that it could have been such a good one.

If you didn’t see it opening weekend, wait for Redbox. If you absolutely have to see it in theaters watch the first 30 minutes, then hop to another theater and see any other movie. The second and third acts really are that confusing and just laughably bad.

However, The Circle put some important questions in front of the audience. Ones that Snowden covered last fall, but will likely reach a larger audience due to the fact that this movie has both Tom Hanks and the real life Belle from the live action Beauty and the Beast.

The core of the plot centers around the concept that Americans willingly trade their privacy to tech companies for the sake of convenience, then engage in worse behavior and suffer from poorer quality of life at the hands of the tools they cried out for.

This is both true and very concerning.

Feeling down? A one-week break from Facebook may help you recover. Unless, of course, you’re depressed because Congress voted to make it legal for internet service providers to sell your every move online.

Perhaps most perplexing of all is how Americans, on the whole, decry the rollback of privacy for a week or two, then get back to Facebook posting and app usage as normal.

Last fall, Verizon announced that it’s combining your cell phone app habits with your real address, device type and internet history into a single profile to sell to other companies. While this isn’t currently illegal, it’s a disturbing practice that Facebook and Google are also advancing in at an alarming rate and a dangerous trend that could one day have negative repercussions on both religious freedom and freedom of speech.

An Analogy for the Church?

For Christians, there’s a parallel message running alongside the main plot.

The Circle may be a dumb movie, but it paints a realistic picture of how some churches become very cult-like. When Emma Watson’s co-workers feign concern in the aforementioned scene, it’s the most crafty version of manipulation; painted over with positivity, when it’s really all about control.

The Circle asks what happens if a corporation takes over every part of the lives of their employees.

The fictional company demands control over even the non-working hours and social lives of Circle team members. The whole thing comes across as a bit silly, since no major tech company has ever been accused of behavior even remotely close to that.

But there is one place where members are drawn in, then manipulated and coerced into a narrow band of acceptable behavior: in unhealthy Christian groups across the United States.

It’s far from the norm, but examples of extreme control over members does seem to be a growing trend. In 2015, Karen Hinkley and the Village Church, home of Matt Chandler, a popular pastor, author and the president of the Acts 29 church planting network, became the center of heated controversy.

The leaders cited Village Church’s covenant membership policies and informed Karen that she could not withdraw her membership while under church discipline. Karen requested Village Church “refrain from any future communication on my behalf to my friends, family and supporters,” which church leaders ignored for weeks.

There’s no evidence Chandler was aware of these events as they were unfolding. In May 2015, Chandler apologized via a sermon, without mentioning Hinkley by name, and admitted the leader’s behavior toward Hinkley had crossed the line from counseling to control. She later said she forgave church leaders.

Compared to some incidents of cults popping up within Christianity, Hinkley got off relatively easy, as the damage was only emotional and psychological.

In 2012, former International House of Prayer intern Bethany Deaton died. The apparent suicide, later investigated as a potential murder, never reached trial. However, there’s no doubt that one way or another, Bethany’s death was a result of being involved in a Bible study at Southwestern University led by her husband, Tyler Deaton.

What started as a simple time of prayer and Scripture turned into something much darker. Over the course of several years, Tyler took control of the finances and life decisions of several members of the group. The “Bible study” lived together, pooled their wages and were required to attend several events each week.

Even the smallest step out of line could lead Tyler to accuse a member of being demon possessed. As the group’s leader, Tyler regularly demanded members do anything from abstain from listening to all music to breaking off a romantic relationship, to shunning friends and relatives.

The extreme control only ended with the death of Tyler’s wife, Bethany. Micah Moore, a member of the group, initially confessed to murdering Bethany at Tyler’s request, so Bethany wouldn’t go public with alleged sexual assaults within the group, but was later acquitted.  IHOP said the church had no knowledge of Tyler’s dangerous and controlling behavior.

Those are just two stories that have found national media attention.

However, Christianity is littered with stories of heartbreak and devastation from incidents where a leader crossed the line from counselor and shepherd to master manipulator for money, sex or simply the rush of being in control of every aspect of other people’s lives.

The Circle may be a bad movie, but it serves as an excellent allegory for how Christian ministries or faith-based groups operate when they spiral into cults.

If there’s any redeeming value of The Circle, it’s to spark Christians to question who seeks to track and control us, regardless if the offender is an unhealthy spiritual leader or a massive corporation.