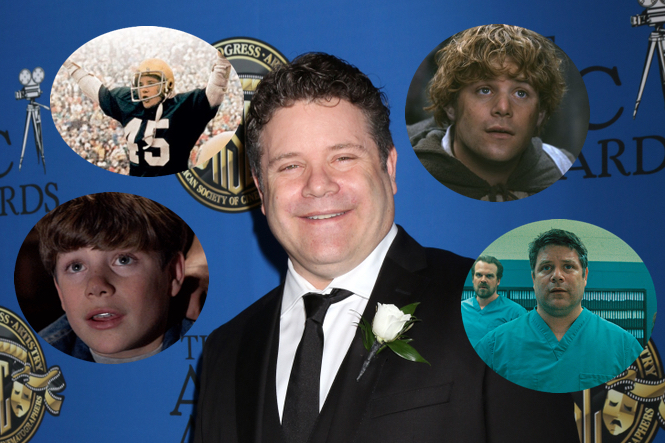 The Enneagram. Myers-Briggs. Gallup Strengthsfinders. There are many quizzes and tests that can tell you a lot about a person, but none of them are as piercing, nor as prescient, as the one tearing through social media like a football playing, treasure-hunting, Light of Elendil-wielding RadioShack manager.

Yes, the question tearing the internet apart today revolves around Sean Astin. Most actors consider themselves lucky to get one career-defining role. Astin has at least four and as Twitter discovered, those four are spread out across the disparate eras, giving each new generation yet another defining Sean Astin role to cling to like a liferaft amidst the storms of uncertainty and self-doubt. So which Sean Astin is your Sean Astin?

It started on Twitter, when a picture of Sean Astin playing with a fluffy little otter went viral. That’s normal, cute celebs doing things content, but eyebrows were raised because the Twitter user described him as “Sean Astin from Stranger Things”.

idk who needed this but sean astin from stranger things with an otter pic.twitter.com/DuzkGt4Ld5

Gen Z may only know Sean Astin as the Stranger Things guy, but as Wizened, Nostalgic Twitter was quick to point out, the first Sean Astin was Sean Astin from Goonies.

But no sooner had Wizened, Nostalgic Twitter had its say that Sports Twitter spear tackled into the conversation, reminding everyone that Sean Astin’s true defining role came years after Goonies, when he suited up for Notre Dame. Yes, for many people — especially protein-shake guzzling muscleheads — Sean Astin will always be Sean Astin from Rudy.

But surely you know who came next. A motley collection of elvish-speaking beardos peeking out from underneath the brims of their Gandalf cosplay and cleaning the wax out of their pointy ear prosthetics to remind everyone that Fantasy Twitter is alive and well and Sean Astin’s one and only role was Samwise Gamgee, making Lord of the Rings Sean Astin the one Sean Astin to rule them all.

Who is your Sean Astin?