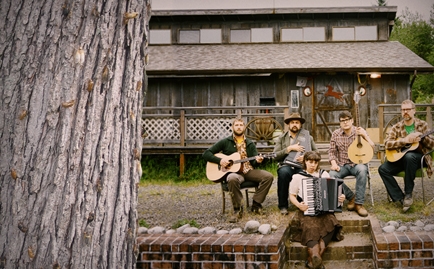 Film director Shekhar Kapur (Elizabeth) gave a TED lecture on the power of storytelling, saying, “We are the stories we tell ourselves.” This philosophy has its holes when you try to move from mere affirmation to an attempt at actual transformation. Yes, people can boost their self-esteem—but positive affirmation alone can’t turn someone into a pirate, an old-fashioned gangster or a dream architect. Unless, of course, you’re Colin

Meloy, lead singer and lyricist for The Decemberists.

Meloy has etched out a name for himself since The Decemberists’ first EP, 5 Songs, debuted in 2001. The six-song collection could best be called quirky, but it was a modest beginning. Trapped in a whale? Transforming spouses to birds? Just another day at the office for the Portland-based quintet, which also includes Chris Funk (multi-instrumentalist), Jenny Conlee (keys/accordion), Nate Query (bass) and John Moen (drums).

Despite his band’s larger-than-life appeal, Meloy—who studied writing at the University of Montana—sees The Decemberists’ mission as a simple one: communicating meaning through common themes, no matter how bizarre they might seem. “If you’re writing a memoir and you’re talking about your relationship with your mother, the reader doesn’t care about your relationship with your mother,” he explains. “The reader cares about their relationship with their mother. So it’s important if you’re writing in anything from your own mind, you feel like people will connect with it, that it’s important, the voice is open-ended enough that people will be able to apply their own experience to it.”

The band’s previous albums have risen above the indie rock fray with unapologetic use of banjo, mandolin, hurdy-gurdy and the good ol’ fashioned 17-minute epic single, all laced with liberal dashes of SAT-level vocabulary. Even while mining the most basic of human emotions, The Decemberists have taken pleasure escaping the dregs of reality, creating a space where the term “geek” isn’t derogatory—it’s the highest form of praise.

Though, if one is to look at the album as a direct indication of Meloy’s day-to-day life, very little could be determined on a surface level. The 36-year-old admits to a significantly more pastoral existence than his perpetually conflicted characters. “We’re [Meloy and wife Carson Ellis] up in the woods a bit, backing up against this 5,000-acre city park in Portland called Forest Park,” Meloy says. “Three or four days out of the week I go for, like, an hour- or two-hour-long walk in the woods. It’s been a nice meditative time.”

Meloy also keeps busy by spending time with his son, Hank, who was born around the same time he was writing songs for their major-label debut, The Crane Wife. Already, Hank is showing signs of his father’s love of storytelling. “He’s pretty fascinating,” Meloy laughs. “He doesn’t like to be read to, oddly enough. We used to read to him, but he started reading very early and now only likes to read to himself. D’Aulaires’ Book of Greek Myths is kind of a perennial favorite. It kind of runs the gamut.”

This may sound like the trappings of a bygone era, an artist seeking the solace of nature for inspiration, cloistered alongside wife and child. But Meloy is neither a Luddite, nor prone to pronouncements about “the good old days.” Able to joke about Henry David Thoreau in one breath and ponder social networking in the next, he comes across as a latter-day Renaissance man. “I’m still trying to figure out the benefits of managing your personal relationships through social networking. Crazy times we’re living in!” he laughs. “I think we’re establishing these relationships with people where in some ways [we’re] very superficially connected to them, and yet we may know the intimate details of their lives and completely miss out on some of the larger picture changes.”

Though new album King Is Dead isn’t as sprawling as previous efforts, it’s still a Decemberists outing—complete with the trademark mix of anachronisms that allows Meloy to name-drop both chewable Ambien tabs and old-fashioned gangs in the course of the same album. “I still feel like I’m trading in archetypes a lot. ‘Down by the Water,’ the idea is a gang coming into a resort town for the summer and the heartbreaks that occur in the wake of this transient population taking over the town,” Meloy says. “I feel like it’s not necessarily anchored to any time or place.”

Though King is not a concept album, Meloy doesn’t deny an overall guiding principle. “I think every record should have a theme or some sort of concept that ties the songs together. I think even if there’s not one, people will apply one to it. Any kind of body of work typically works that way,” he says. “I think our brains are just kind of wired that way.”

A recurring fascination with nature has been consistently woven throughout The Decemberists’ work. The themes of old and new, of man and nature, play heavily into the new album. In some tracks, nature gets the better of man—particularly the apocalyptic image-heavy “Calamity Song,” about two lovers in “the war of End Times.” “I was poking fun at the romance of disaster that you sometimes see in Christian fundamentalism,” he says, citing a famous politician as the source.

“Sarah Palin saying how Alaska will be the final paradise once the lower United States succumb to earthquake and flood, [and] people will make their way to this promised land of Alaska. I always thought it was fairly funny and an interesting view of what the End Times would be. I think of ‘Calamity Song’ as being as outrageous of an exploration of disaster as I could muster.”

But doesn’t this sound like another—albeit more specific—biblical prediction of the time to come? Meloy—an avowed atheist—disagrees. “I feel like if you’re trying to get any sort of Christian parables out of any of these songs, I think that whatever allusions I make tend to be pretty secular,” he warns, anticipating this line of questioning.

Earlier in the conversation, he declares his favorite albums are those where the listener is allowed to bring his own interpretation to the table. Perhaps the same can be said for Meloy’s personal creed. “I tend to think of morality as being fairly relative. I think trying to pin something as being absolute, I think that, in itself, is a flaw of human nature—looking for absolutes,” he says.

So, does Meloy hold any unwavering personal beliefs? “I think we’re looking for something that’s cut and dry, something that can be easily digested and easily taught,” he reflects. “I tend to think of morality as something that’s very relative, depending on your political outlook, your spiritual outlook. I think it’s in bad faith to think that what we might consider to be an absolute, then if it’s not seen that way by someone else then by definition it is not a moral absolute.”

Of course, Meloy isn’t without opinions. “I’ve done my fair share of political benefits and trying to highlight things I think are important,” he notes, but adds: “I wouldn’t call myself an overly political or socially active person.”

Instead, Meloy’s views play out in The Decemberists’ work—much of it dealing with the issue of corruption leading to downfall. Perhaps most notable is the “16 Military Wives” music video, where the leader of a school’s Model United Nations (played by Meloy) imitates a human-rights bullying campaign on the student representing Luxembourg—all in the name of America.

It may come as a surprise that despite appearing at campaign rallies for now-President Obama, Meloy is not particularly idealistic about the current administration’s work to date. “I’m sure most supporters of Obama, we’re all scratching our heads right now,” he says. “I would definitely count myself among the former Obama supporters who are a little disappointed that the change that was being promised is not the change we’re seeing.”

Meloy’s music backs up this view. There are no all-powerful heroes in Decemberists’ tunes—just people doing their best in extreme circumstances. “I think of all the characters that pop up in the songs, I think of them as being fairly dynamic—not necessarily good, but not necessarily evil,” says Meloy, reflecting on his collection of guises in song.

“I think the characters I most connect with are all very conflicted and make poor decisions or are tragic in some way,” Meloy admits. “But in the end I would hope they would be fairly sympathetic.” If the characters are the stories he tells himself, then Meloy seems prepared to weather life’s storms—no matter what metaphors the winds might blow his way.

Should the U.S. Be in Libya?