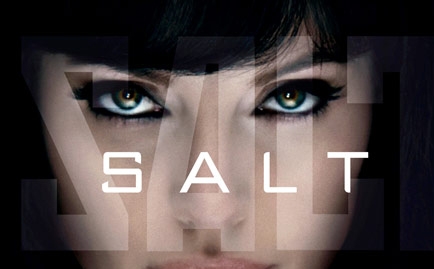 Angelina Jolie has become one of the most unique actresses on the planet since first arriving on the acting scene in the late ‘90s. After winning a Best Supporting Actress Oscar for her wild-eyed turn as a mental patient in Girl, Interrupted, she attempted a few other serious acting roles but only seemed to find blockbuster success when she took on the lead role in the feature-film adaptation of the video game Lara Croft: Tomb Raider.

Audience affection finally caught up with her critical acclaim when she teamed up with Brad Pitt in the action-comedy smash hit Mr. and Mrs. Smith in 2005.

Jolie is an enigma wrapped inside of a riddle: an outspoken advocate for United Nations and children’s causes who nonetheless maintains a near-impenetrable wall of privacy around her personal life with partner Brad Pitt. With her new movie, Salt, Jolie may appear to be continuing her action-star career with a same-old, same-old role, but the film is actually more complex than that. She plays a woman believed to be a double agent spy and goes on the run to clear her name.

Salt was originally intended as a starring vehicle for Tom Cruise, but when he turned it down, Jolie was able to step in with few changes. That move alone shows how far she’s come, and the unusual status she enjoys in Hollywood as the one actress who can kick butt as well as the male stars around her.

Jolie recently sat down at the Spy Museum in Washington, D.C. to answer questions about action films, being a hidden person and being principled.

What drew you to Salt, and weren’t you afraid that people would think it’s another one of your typical action films?

I thought it was one of the smartest scripts I’ve read, and I’ve done a lot of action movies. They were always based in fantasy in some way, so this was the first time I got to do one based in reality. I think that makes all the action harder, tougher and a lot more fun. I had a great time.

I love doing action, and love doing dramatic films, but I have never been able to combine them. As far as action, it’s sometimes fun because it’s fantasy and you can get away with so much: you can bend a bullet, you can make something that doesn’t exist. But this was a challenge because we have to work so much harder to make the audience believe this is real. So my style got meaner, harder and darker, and it wasn’t about being pretty. That made it better because I think this movie and its stunts are a better action movie than what’s out there now.

Salt is a really internal, hidden kind of person. Was that hard to play when you’re so public and outspoken in your real-life views?

It’s hard to explain because there’s so much mystery, and then when you see it, it becomes clear as to why I would play her. There was a duplicity to her personality, and there are certain things about her that are not necessarily a good guy because there are certain things about her that she’s not just brave. She’s not just even. There’s something off about her. But maybe there’s something off about me. [laughs] So it seemed like a good match.

There’s also an emotional depth mined from the fact that Salt has to live her life so alone.

To be a spy, you can’t talk about your job with your friends or family. So it takes a very lonely, isolated type of person to do that job. And this movie really showed how unusual that is, and that was an interesting challenge to play. This film shows Salt and what makes her turn out the way she does by revealing her childhood in scenes with a fine young actress. This film is about the decisions you make, and where you stand at the end of the day with your principles. We all have to come to terms with that at some point in our life and take a stand.

Companies: Don’t Do This