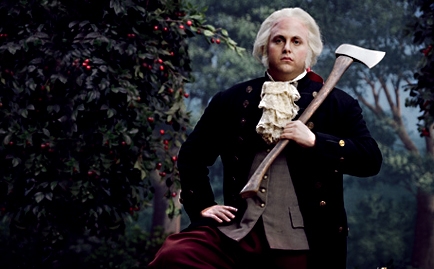 Since his big splash three years ago as the foul-mouthed, heavy-set half of the lead duo in the high school comedy Superbad, Jonah Hill has established himself as a strong comedic presence in numerous other films including Forgetting Sarah Marshall, Funny People and The Invention of Lying. But this summer, he’s getting his first shot as a leading man, first with the recently released Get Him to the Greek (which has earned a solid $50 million so far since its early June release) and more importantly, with his even newer film Cyrus (which is slowly expanding across the country until a wide release July 16).

Hill is a revelation in the new film—breaking out of the string of roles that, while funny, were largely indistinguishable from one another. Here, he moves far past his brash, foul-mouthed screen persona to create a full-bodied, emotionally complex performance of a deeply conflicted young man and manages to hit a home run acting alongside Oscar nominee John C. Reilly (Chicago) and Oscar winner Marisa Tomei (My Cousin Vinny).

Sitting down at the Four Seasons Hotel in Beverly Hills, the surprisingly loquacious and thoughtful Hill spoke of the new film and its deep effect on both audiences worldwide and on his own career path.

You just got back from touring the world promoting Get Him to the Greek.

Hill: I’ve been on the road three months for Greek. Just got back from Australia. It’s been amazing.

When you travel the world, do you notice a difference with audiences? Or is it a universal response?

Hill: No. It’s very different, and very different what people respond to in each movie. Cyrus is actually a delightful change in that, because as far as the bigger comedies—which I adore—certain places like Australia or the U.K. will understand or relate to them more than other countries. Certain countries like Spain, you put Superbad there and they literally didn’t understand why the high school kids couldn’t drink alcohol. Conceptually, it made no sense. A movie like Cyrus or Knocked Up has themes that are very relatable no matter what culture you’re in. Cyrus especially is just a very emotional, human movie, so no matter what your culture or background or where you might live, you understand these feelings universally.

There’s the phenomenon of “failure to launch,” where guys and girls stay longer at home due to the economy. But in Italy, guys stay home way late in life too.

Hill: This has less to do with the current situation and more so to do with the mother having no one to hang out with and the son having no one to hang out with besides each other. [In Cyrus], you could probably place more blame on Molly [Cyrus’ mother, played by Tomei] because she has made some mistakes in allowing Cyrus to not meet anybody else and get out in the world. I’m not sure he knows anyone else.

This is such a switch in tone from the Apatow films you’ve done—it’s so intimate and mixes drama with comedy. Was it a conscious decision to branch out? And who are your idols as far as whose career arc you’d like yours to emulate?

Hill: For me, it wasn’t a conscious decision to branch out. My taste ranges. I love these [broad] comedies and am so lucky to be in them. But my taste ranges beyond this kind of comedy. I knew I had this kind of taste and ability but wasn’t sure if I’d ever get this kind of opportunity, so I jumped on it. It’s not that I was ashamed of those movies, I’m beyond proud of them, but I also dig these kind of movies. Mark and Jay [Duplass, the directors of Cyrus] took on an extra risk to see if I could handle a dramatic role.

For me, I have a multitude of heroes whose careers I love. I tend towards directors more than actors and writers: Martin Scorsese, Paul Thomas Anderson, Judd Apatow, Harold Ramis. There’s a million billion filmmakers I love—Wes Anderson, too—but as far as actors, I look at everyone from Adam Sandler’s and Ben Stiller’s career to the one who probably encapsulates it the most: Bill Murray. Because Bill Murray is a comedic genius, but when he does dramatic work it’s flawless. And John Reilly, and Philip Seymour Hoffman. Sandler, you look at any of his movies from Billy Madison to Punch Drunk Love, they’re both flawless in what they’re trying to do, so that’s someone I really look at as a hero.

How did you prepare for the oddly close relationship with Marisa’s character?

Hill: I actually tried avoiding getting to know her. John and I could get to know each other really well because we were just meeting for the first time in the movie. But since I had to have this entire life history with Molly, I thought getting to know Marisa would make me look at her as “Marisa Tomei, the beautiful talented actress” rather than my mom. Although I love talking to Marisa and she’s great, I didn’t want to get to know her on a very deep level because I think it might have affected the performance.

Hill: I think that’s the beauty of what Mark and Jay have done—you don’t know what Cyrus is capable of. To me, when he goes in the bathroom after John at the wedding, you don’t know if he’s gonna kill him or not. They’ve turned something psycho or funny into something heartbreaking, real and honest. So to me, I just really try to play him as a real person and really believe in what this guy is doing even though I’d never do it myself.

A lot of it is what you don’t say in the movie. We see your character thinking but don’t hear dialogue. We’re just reading your face, so was the challenge keeping it all in your face?

Hill: A lot of times in big movies, dialogue gets in the way of true expression. In real life, a lot of my deepest conversations were spent mostly silent because there’s so much going on. In movies, a lot of times people are able to spit back what they’re feeling. If something heavy is happening, you need a lot of time to process what’s being said to you and how you’re feeling in that moment. I was having that conversation but internally and trying to make it feel honest and real. I try to do that in everything I do, but this was just a greater opportunity and setting.

What Are Smartphones Doing to Us?