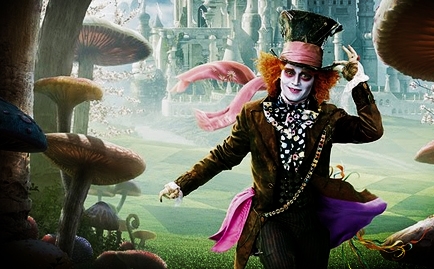 Over the two decades since their initial collaboration on the classic 1990 film Edward Scissorhands, Johnny Depp and Tim Burton have created some of the most original and distinctive ouevres in film history. With their seventh and latest film together, Alice in Wonderland, opening today (in 3D), the pair sat down with RELEVANT to discuss their careers and the motivations behind their mad genius.

This is a massive project. What was it that made you want to go into the world of Alice in 3D?

Burton: That was it: the world of Alice in 3D. The world that Lewis Carroll created, the trippiness. I started thinking about the world of Lewis Carroll, not the films and things, but listening to music and bands and other artists and illustrators who are influenced by it. The idea that if it were written today it would be mind-blowing today. So the combination of the material and the media just seemed right.

You’re putting your own stamp on this. It’s not the Alice we’re used to.

Burton: There are so many different versions, but not one I really liked, so to me no definitive one we were fighting against. [Screenwriter] Linda Woolverton treated this in terms of how Alice material has affected us, about somebody using this kind of imagery to solve problems in their own life and what’s fantasy and reality, dreams and reality. How they’re not separate things, they’re one thing we use to solve our issues in life.

You actually shot this in 2D and converted it to 3D. What was your reason for doing it  that way?

Burton: With all the techniques we were using, there was no point in shooting 3D when there was nothing to shoot. We had live action, animation, virtual sets, little-bitty sets. I looked at when we did the conversion in Nightmare [Before Christmas], and now you’ve got all of these tools and you can see good 3D, bad 3D, good and bad conversions so that when we got all the elements finally together, it fell into place when the technology was decided on.

Johnny, this is yours and Tim’s 7th film together. When he came to you and said "Mad Hatter," what was your reaction?

Depp: To be honest, he could have said, "Be Alice" and I’d be there. I would have done whatever character he wanted, but this was a bonus. It was a challenge not to just be a rubber ball type bouncing all over the place. Find the history and nature of the guy.

There’s a tragic history to the Mad Hatter here that I’ve never seen before in other versions.

Depp: I think there’s the whole Hatter’s dilemma, really, where the term “mad as a hatter” came from: the amount of mercury used in the glue to make the hats was damaging. This guy was literally damaged goods—physically damaged and emotionally obtuse, and we decided that opposed to being this hyper-nutty guy, he should expose all facets of this personality. From highfalutin levity to potential rage and tragedy all within seconds. It was interesting trying to figure it all out.

Burton: It was interesting, having Disney as our studio. We didn’t have the mercury poisoning aspect. It wouldn’t translate well to 3D.

Was there a time in your career when you felt like Johnny in Wonderland? How did you keep from being angry about fame?

Depp: It defies logic. I’m completely shocked I still get jobs and am still around. It’s been a Wonderland, but I’ve been very lucky. I didn’t dream it would be like this when I started. It’s impossible to predict. I felt like after I’d done Crybaby with John Waters and Edward Scissorhands with Tim, they were going to cut me off right then. I was on solid ground at that point and knew where I was going, so at that point I thought they’d nix me from the career, but luckily I’m still here.

How did you see your professional relationship grow on this film?

Burton: I couldn’t even look at him on this shoot because he looked like a scary clown and I hate clowns. But I love Johnny because he’s willing to try different things otherwise. It’s great when you know somebody and they keep surprising you.

Depp: Each time out of the gate with Tim, it’s surprising. The initial thing for me is to come up with the character, but there’s a certain amount of pressure where you go, will this be the one where I disappoint him? You want to think of the experience that inspires him to make those choices. I try not to embarrass him, basically.

Johnny, you’ve created so many lovable characters. When you start something new like the Mad Hatter, do you look back at your own work and make sure you don’t repeat anything?

Depp: You have to when you do the same kind of thing several times, like I’ve played British several times. You have to be careful: does this seem to teeter into Captain Jack, or Chocolat? But that’s part of the challenge—you may get it wrong, you may fall flat on your face, but I think that’s a healthy thing for an actor.

Was there anything in Alice you couldn’t do yet technologically? And Johnny, would you ever put on a motion capture suit for a movie like Avatar?

Burton: We were just using all sorts of technology, you could go purely motion capture. I never try to focus too much on technology, the fun for us is to work artistically and not get too overly involved with it.

Depp: I’ll put anything on for a role. I don’t mind. I decided to do this because I’m getting older and my son doesn’t really know what I do. I did this one for him

Which movie is your children’s favorite?

Depp: Edward Scissorhands, by far. They connect with the character and they see something with their dad feeling that isolation and loneliness. They bawl.

Burton: My kids don’t really like my movies. Not really, they’re too young. My son’s getting older, but he’s still too young to really know what I do, so whatever.

Johnny, with regards to your Happy Dance at the end of the movie—one of the great earmarks is that it’s unique to the person. So is this part of your real repertoire?

Burton: He’s injured himself, he can’t do it today.

Depp: We had to treat that like a stunt.

Burton: You wouldn’t treat Fred Astaire like that, would you?

How to Sell the Son of God

Why Does a Salad Cost More than a Big Mac?